A National Labor Relations Board ruling permitting college athletes to unionize will be an NCAA disaster only if colleges fail to reform their sports-business practices. 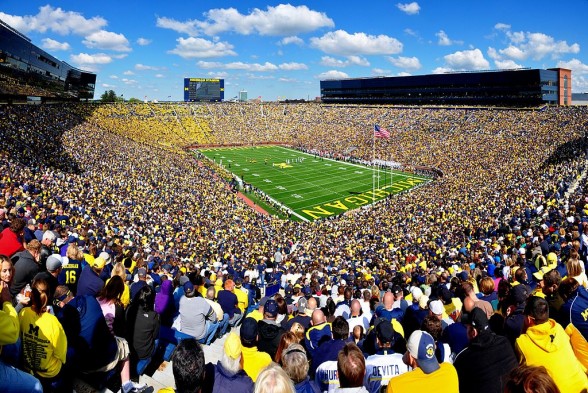 When the NCAA can fill stadiums like Michigan’s with 112,000 people, the argument about the impossibility of properly compensating athletes rings just a tad hollow. / Wiki Commons

Overshadowed by the NCAA hoops tournament and the start of baseball season was a federal-agency decision that will go a long way toward imploding a sports fraud more complicated and enduring than Lance Armstrong — the amateurism myth in college sports.

A ruling last week by National Labor Relations Board regional director Peter Sung Ohr  legitimized the bid of Northwestern University football players to create a union when he agreed that athletes are employees, not merely students, who have the  right to organize.

Northwestern officials harrumphed that they disagreed and would appeal; the NCAA, which is not a party to the case but has a huge interest in the outcome, warned of Old Testament-style plagues, and mouth-breathers such as Sen. Lamar Alexander (R-Confederacy) went all Foghorn Leghorn.

“Imagine a university’s basketball players striking before a Sweet Sixteen game demanding shorter practices, bigger dorm rooms, better food, and no classes before 11 a.m.,” Alexander said. “This is an absurd decision that will destroy intercollegiate athletics as we know it.”

Alexander fell just short of quoting Leghorn: “This is the most unheard-of thing I ever heard of.”

Beyond the cartoonish bloviation, he did get close to the truth: The ruling could advance the chain of events that will result in the formal professionalization of big-time college athletics, instead of de facto pro, as it stands now.

Alexander and most critics leaped to stereotypes about unions in an attempt to demonize the varmints who came up with the idea, conveniently avoiding the fact that a key part of Ohr’s decision says athletic scholarships constitute pay for what are usually 50-hour-per-week jobs that are kept or lost at the annual discretion of the head coach, not academic standing.

That sounds to me, and most mammalian bipeds operating beyond their medulla oblongatas, like a job. There’s no arguing around it.

A point misunderstood by the status-quo crowd is that unionizing is some college kid’s  idea of a perfect solution. It is but one potential outcome, not necessarily the best or only way. What the ruling opens up is a means, still years off by any forecast, to a negotiated solution that provides proper compensation and benefits for full-time players while still leaving the NCAA with some semblance of organizational control.

What that looks like remains to be seen, but John Infante, a former college administrator who works for athleticsscholarships.net, has the best sense of a way forward short of annihilation by litigation. A portion of his blog post:

” . . . the ruling, much of its rationale, and other ongoing attacks on the NCAA are helping to make the NCAA’s position untenable. But not the position of amateurism and education as compensation. And not the position of commercial athletics on college campuses. What the NCAA is being forced to abandon is the assertion that it can straddle the fence between both those positions.

“On the one hand, the NCAA is technically a private, non-profit corporation governed by its members . . . On the other hand, the arguments for the NCAA’s status as a state actor or public institution are still strong. The NCAA receives a large public subsidy in the form of tax-exempt status. Many of its members are public universities, arms of state governments.

“Most athletic departments are subsidized, in many cases heavily so, by institutions which depend on state or federal aid for revenue. And in almost every other country in the world, one of the NCAA’s primary functions, preparing Olympic or national team athletes, is funded and overseen by the government.

“Broadly speaking, the current legal assault on the NCAA system demands that it abandon pretenses of being a regulatory agency or charity and operate as a better corporate citizen.”

Rather than railing against athletes who have been backed into a corner in pursuit of their fair share of NCAA sports’ enormous wealth, college sports should reform itself legally into what it really is — a for-profit entertainment corporation that organizes national rules, logistics and business so that their employees, the athletes, are fairly compensated while providing universities sufficient revenues to sustain non-revenue sports.

Such reforms will be difficult, and fraught with unintended consequences. To which I say: So what?

If Nick Saban, Mike Krzyzewski and their brethren have to take million-dollar haircuts; if some schools have to drop down in athletic class; if the remaining big-time schools have to adopt more liberal revenue sharing to assure the survival of the many; if schools have to make academic progress of scholarship athletes optional instead of mandatory; then make it so.

If the NCAA does not undertake profound reforms for itself, the courts and Congress will, then everything becomes a chaotic, unwieldy, dysfunctional mess. For years.

Ohr’s ruling is not final. It is subject to NLRB appeal and perhaps argued in federal court. But it is a substantive repudiation of the status quo, and further evidence that the hypocrisy of college sports is going to end.

It’s up to the NCAA to decide whether it likes its current position on cliff’s edge, affixed only by fingernails, or would like to negotiate for a hand up.