Good start by Mariners, but don’t get giddy

The Mariners have not won three in a row to start a season since 1995 and haven’t swept a three-game series at the start of the year since 1985. 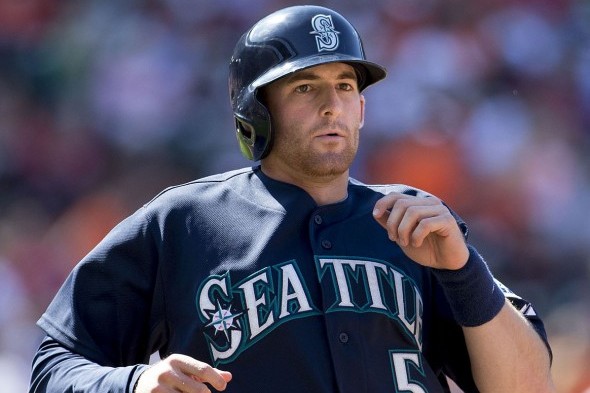 Brad Miller had two home runs in the 8-3 win over the Angels Tuesday. He has 10 career homers in 78 games. / Wiki Commons

The Mariners opened a season with a pair of road victories just three times in 38 years, but the first two times it happened, the season immediately went south. In 2011, Seattle launched with 6-2 and 5-2 wins at Oakland, then lost seven in a row en route to a 67-95 finish. So fans may want to temper any giddiness.

Last season, after Felix Hernandez and Hisashi Iwakuma recorded 2-0 and 7-1 season-opening victories, also at Oakland, the Mariners dropped seven of nine, concluded April 12-17 and the year 71-91.

RUNS APLENTY: The Mariners scored 18 runs, one shy of the franchise record for the first two contests of a season. In 1979, Seattle opened with 19 runs in 5-4 and 14-6 wins over the Angels. The Mariners tallied 16 in their first two games in 1982 vs. Minnesota and 1998 vs. Cleveland.

PROTECTING CANO:  Justin Smoak is 4-for-8 (.500) with six RBIs after two games. Smoak, 27, drove in five runs in April last season and didn’t get his sixth RBI until May 10. He finished the year with a disappointing 50 RBIs despite a career-best 20 home runs in 131 games.

SHADES OF GRIFFEY: Shortstop Brad Miller had two home runs in Seattle’s 8-3 victory Tuesday night. Miller has 10 home runs, including four two-homer games, in the first 78 contests of his career. For Seattle, only Ken Griffey Jr., with 13 in 1989, had more in a similar number of games.

NOT IN 5,870 GAMES: Starting with their 1977 inaugural year, the Mariners played 5,870 games before this happened Tuesday: In the eighth inning, newcomer Joe Beimel came on in relief of Tom Wilhelmsen to face former Mariner Raul Ibanez, who homered earlier. Instead of pitching to Ibanez, Beimel threw to first, picking off David Freese to end the inning.

Beimel gave way to Fernando Rodney in the ninth. When Rodney closed it out, Beimel became the first in franchise history to get credited with a hold without throwing a pitch.

Beimel also became, according to baseballreference.com, only the second major league pitcher to earn a hold without officially facing a batter. On April 12, 2011, Detroit’s Bryan Villarreal relieved Brad Penny, immediately picked off Julio Borbon from first base, then departed the game.

Since 1919, more than 250 pitchers have recorded an out without facing a batter, although  Biemel and Villarreal are the only ones to receive credit for a hold. Beimel is the third Mariner to do it, following Dave Fleming Aug. 6, 1991 against Oakland and Jose Paniagua April 23, 1999 vs. Tampa Bay.

RISP: The Mariners batted .228 with runners in scoring position last year, third-worst mark in the majors. After two games this season, the Mariners are 8-for-19 with RISP (.421).

FURTHER REVIEW: When the Mariners recorded seven extra-base hits and eight walks in Monday’s opener, it marked the first time they had at least seven of each in the same game since Sept. 15, 2006, when they defeated Kansas City 11-8. The batting order was Ichiro (CF), Adrian Beltre (3B), Kenji Johjima (C), Raul Ibanez (LF), Richie Sexson (1B), Ben Broussard (DH), Yuniesky Betancourt (SS), Chris Snelling (RF) and Jose Lopez (2B).

The seven extra-base hits Monday were also the Mariners’ most on Opening Day.

Triples by Mike Zunino and Dustin Ackley Monday were the first Opening Day triples by any Seattle player since Spike Owen in 1986.

NEXT: After winning two of nine games at Angel Stadium last year, the Mariners seek a three-game sweep of the Halos Wednesday with rookie left-hander James Paxton taking the mound. The Mariners have not gone 3-0 to open a season since 1995, and have not swept a three-game series to start a year since 1985 when they won their first six with 3-0 sweeps vs. Oakland and Minnesota.

Typical of the Mariners, they lost 12 of their next 13.

Santiago has never started against Seattle, but faced the Mariners six times in relief while with the Chicago White Sox, with three runs allowed in 7.2 innings.