Former UW quarterback Keith Price made every throw at Pro Day in front of a sizable NFL contingent, but it’s unclear whether it will be enough to prevent him from going undrafted. 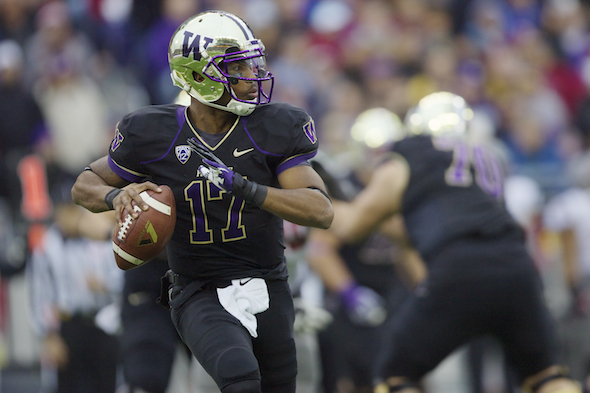 Keith Price found his groove his senior year while leading the Huskies to a 9-4 record. / Drew Sellers, Sportspress Northwest

It wasn’t quite his last chance to impress NFL scouts, but former Washington quarterback Keith Price did have a bit more than most riding on UW’s annual pro day. Price didn’t receive an invitation to February’s scouting combine, and he hasn’t worked out for any pro teams with the draft a little more than a month away.

Wearing backward a black hat with the phrase “DON’T DOUBT ME” in white letters, Price had his audition Wednesday at the Dempsey Indoor Practice Facility on campus.

Under the direction of private quarterbacks coach Steve Calhoun, he threw fades, hitches, go’s, slants, hooks, swing passes and outs, short and long. He showed mobility and the accuracy that helped him complete 66.2 percent of his passes for 2,966 yards, 21 touchdowns and six interceptions as a redshirt senior in 2013.

One-time teammates Bishop Sankey, James Johnson, Kevin Smith, Jonathan Amosa and Antavius Sims were his pass-catchers. Unlike his UW career, there were no defensive players to offer resistance.

“I think he did well,” Sankey said of Price. “He completed every route they asked him to throw out there. He does what he does. He’s consistent. That’s the great thing about Keith. You know what you’re going to get in him. I think he looked smooth today.”

Afterward, Price said he was still mad about the combine snub. As of March 31, cbssports.com projected that he will go undrafted, then sign as a free agent. It ranked Price the 23rd best quarterback prospect overall.

“In January I was preparing myself for the NFL combine. There was no doubt in my mind that I was going,” Price said. “I was in Carlsbad (CA) training with Blake Bortles and Brett Smith and Ka’Deem Carey. All those guys are getting ready to go, and I’m the only one stuck at the facility. I was a bit pissed about it. But there was nothing I could do.”

Sankey didn’t need to improve his stock after running a 4.49 40-yard dash and benching 225 pounds 26 times at the combine. Wednesday, he participated in the 60-yard shuttle drill and caught passes.

Tight end Austin Seferian-Jenkins didn’t participate at all, instead watching from the end zone. He said he hopes to be back to full health by April 26 after missing the combine following surgery to repair a stress fracture in his foot.

The focus Wednesday was on Price. That’s a new feeling for the Compton, CA., native.

“Ever since I was a kid, man, I’ve always had to prove myself. (Our high school league) had Matt Barkley, and he took all the shine. I didn’t really get any publicity, and I don’t do it for publicity. I do it because I love the game. When I came here they had Nick Montana jerseys being sold before he even stepped foot on campus. I had to prove myself again. Now, after all my production here, I don’t get invited to the combine . . . it keeps me hungry.”

At 6-1, 202 pounds, Price is slightly undersized for an NFL quarterback. He has an injury history after playing for three years behind a suspect offensive line. He was sacked a combined 65 times as a junior and senior.

Price showed no signs of being hampered by the shoulder injury that kept him out of last year’s game against Oregon State or the rib injury that knocked him out of  the second half of UW’s Fight Hunger Bowl win over BYU.

His performance also answered questions about his arm strength, at least in Carroll’s mind.

“He threw the ball 65 yards. That’s far enough,” said the Super Bowl-winning coach as he walked out of the practice facility.

“I thought I’ve always had arm strength,” he said. “People question it because I take something off of my throws. I like to throw catchable balls. I don’t need to throw 100 mph fastballs. I could if I wanted to, but I believe catchable balls are better. If I need to zip something through a window, I’ve shown that on film also.”

It remains to be seen if the rest of his repertoire is good enough to help him become an NFL quarterback.

“I’m (going) to continue my journey,” Price said. “It’s been a stressful one, but I’m glad I’m going through it.”