Kent’s charge at WSU: Get city kids to Pullman

A tepid basketball history at Washington State doesn’t faze new coach Ernie Kent. But $1.4 million helps ease the difficulty of the attempt at a turnaround. 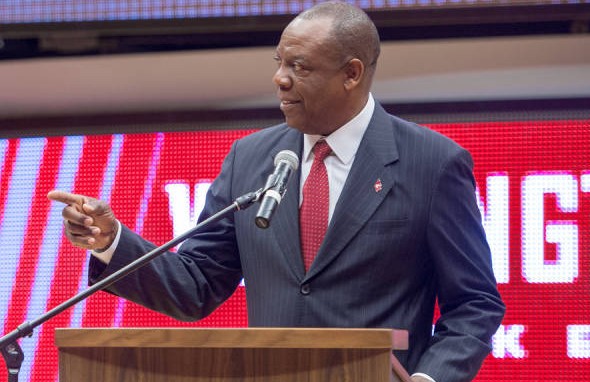 PULLMAN – When Ernie Kent was named the new temporary basketball coach at Washington State – basketball coaches are always temporary at Wazzu – one thought came to mind: He’s too old to have the energy to recruit.

Then I looked up his birthdate: Jan. 22, 1955. The man is just five days older than yours truly, who still regards himself as The Eternal Spring Chicken in spite of an ever-increasing series of dubious statements/warnings/demands issued in recent years by physicians, coaches, teammates, family members, alleged friends, etc.

Ya know, now that I’ve given it some more thought, this Kent fellow seems downright youthful. Spunky.

Of course, that has been said of plenty of men before they coached basketball in Pullman. The mental health of Washington State basketball coaches tends to go south when their own failings become engulfed in the massive tire fire that is, for the most part,  WSU basketball history.

That’s it for conference titles at Wazzu. Two in one century. One per world war.

No wonder athletic director Bill Moos is so smitten with Kent. After all, Moos was Oregon’s AD in 1997 when he hired Kent to rebuild the sinking Ducks basketball program, and it took Kent just four years to go to the NCAA tournament and five years to win a conference championship and advance to the Elite Eight.

The Cougs lost in the national title game that year. Wisconsin won, 39-34. No truth to the rumor that Dick Bennett coached both teams while extolling the virtues of the pack-line defense.

Kent won a school-record 235 games at Oregon, but he also lost 174. Moos was long gone by the time Kent was shown the door following 8-23 and 16-16 seasons his last two years at his alma mater.

The first of those teams finished last in the Pac-10. His final team tied for next to last, one game ahead of Ken Bone’s first Cougars squad.

Now, after four years in the television booth, Kent is being asked to revive a basketball program and its fan base. Neither task will be easy, because the Cougars return little talent off a 10-21 team that finished 11th in the Pac-12 at 3-15 and looked bad doing it. Average attendance was (blush) 2,800. Officially, not actually.

Many believe Kent was Moos’ backup plan if Leon Rice decided to stay at Boise State. However, Moos said Wednesday that he did not officially offer the job to Rice, a WSU graduate who announced over the weekend that he will remain a Bronco.

Moos made it clear that hiring a masterful recruiter (such as Kent and Rice) was essential. Kent, a gregarious charmer, recruited four first-round NBA draft choices to Oregon when the Ducks played at ancient Mac Court, aka “a rat hole” (Moos’ term of non-endearment). Washington State has produced two first-round NBA draft choices in school history (Don Collins and Klay Thompson).

Kent’s first recruiting efforts will involve the two players who have signed national letters of intent with the Cougars. Point guard Tramaine Isabell from Seattle’s Garfield High School and junior college forward Jermaine Morgan are waffling a bit about whether they will come to WSU or try to get out of their letters of intent.

Elite basketball is an urban game for the most part, and it is inherently difficult to recruit basketball players to the rolling grain fields of the Palouse. Cougar Country cheeseburgers, Ferdinand’s ice cream and Cougar Gold cheese are culinary gems unbeknownst to teenagers who hoop in the big city, otherwise Pullman no doubt would be overflowing with big-time basketball recruits.

The knock on Kent is that he’s not all that great at X’s and O’s. Isn’t it, um, interesting how so many black head coaches, like Kent, get pegged with the “good recruiter, bad coach” designation? Gosh, it must be just a coincidence.

One thing’s for certain: Coaches of any color look a lot smarter when players make baskets, and the Cougars shot an abysmal 40 percent from the field this season. Only 13 of the 345 teams in Division were guilty of more clanking.

Some WSU basketball followers are convinced the Cougars can’t consistently recruit the type of players who can succeed in wide-open offenses, but Kent vows to bring his up-tempo offense and sound defensive play to the Palouse.

Moos loves green dollars almost as much as he loves all things crimson, and the AD was not happy that Beasley Coliseum had become a ghost town on game nights. Moos is paying Kent a school-record $1.4 million a year to a) win games and b) win over the fans.

“I really look forward to filling that arena again,” Kent told an estimated 500 students at Bohler Gym on Wednesday afternoon. Kent’s chances of doing that next season were greatly enhanced when senior-to-be guard DaVonte Lacy – the only established star on the Cougars – revealed Wednesday that he was so pleased with Kent’s hiring that he is no longer considering the possibility of transferring or turning pro.

Time will tell. Kent wasted little time, however, in establishing his true allegiance when the Cougars face Oregon.