Seattle finally gets a look Tuesday at the Mariners’ $240 million investment, Robinson Cano. His hire puts all of GM Jack Zduriencik’s chips on the table to win now. 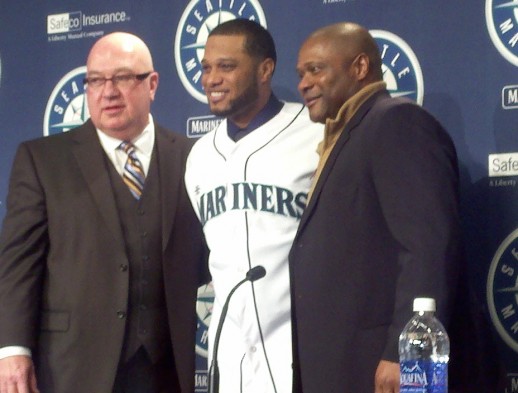 These three men — Jack Zdurencik, Robinson Cano and Lloyd McClendon — are standing because their seats are a little too warm. / Art Thiel, Sportspress Northwest

Four months after the deal, Seattle gets to welcome in person Tuesday night at sold-out Safeco Field the latest change to its skyline — Robinson Cano.

The Mariners have bet big that it will last 10 years — a long time in sports, but less than half the life of the Kingdome. The big difference is that the Mariners franchise already has imploded. Cano is in charge of the resurrection (Easter nears, but let’s go no further with the analogy).

Succeeding Ken Griffey Jr. and Ichiro in the club’s position-player iconography, Cano is by all accounts among the five best players in baseball and at least as important to the Mariners now as were Griffey and Ichiro at the time of their ascensions.

Griffey as a 19-year-old draftee in 1989 was the pivotal player in elevating a franchise that took 15 years to get to a winning record — the slowest climb in the history of modern American sports. In 1995, he led them not only to the playoffs for the first time but helped move state government to fund a spectacular new ballpark with tax money.

Ichiro at 27 in 2001 was the American League’s Rookie of the Year and Most Valuable Player, helping produce one of the greatest single seasons — 116 wins — in any sport while becoming the first Japanese national hailed as an international pop culture superstar.

Cano at 31 in 2014 was signed to one of the most expensive deals in sports history — $240 million — to return relevance to a moribund franchise that has lost half its average annual attendance.

After his Dec. 12 signing, the Mariners fell into an even colder, darker shadow, thanks to another change in the Seattle skyline — the Super Bowl win by the Seahawks, an NFL championship built in part upon the unparalleled intensity of a fan base aching for success and capable like no other of altering game outcomes.

Additionally, the rollicking success of the Sounders, who have made Seattle the American  soccer capital, and the rise of Washington Huskies football program, which added a sharp new coach to a spectacular, privately funded stadium remodel,  made the Mariners seem like ponies among Clydesdales — not to mention owners of a semi-permanent fourth place in the five-team American League West.

At Cano’s signing, general manager Jack Zduriencik was told the story of high-schooler Griffey’s 1987 draft ahead of a college pitcher that then-owner George Argyros wanted to take. Argyros finally gave in, but warned Zduriencik’s predecessor, “OK, but if this doesn’t work, it’s your ass.”

Asked if he heard something similar from ownership as he lobbied for Cano’s monster deal, he smiled and said, “They didn’t say it like that. But I knew it. Isn’t it obvious? I mean, let’s be real.”

Real, too, is eight losing seasons in the past 10, no playoffs since 2001 and only four postseason appearances in the club’s 37 seasons — none including a World Series appearance. Also real was a scathing, on-the-record denunciation of a dysfunctional organization offered in the Seattle Times in December by ex-manager Eric Wedge and other former club employees.

Real is the pressure felt throughout the franchise to win now.

Combined with the September death of Hiroshi Yamauchi, principal owner for 21 seasons who never saw the Mariners play, and the January retirement of Chuck Armstrong, the much-criticized club president, the Mariners’ astonishing decision to out-bid Cano’s old club, the Yankees, by three years and $65 million, was seen by many as the last act of a desperate man.

CEO since 1999, Howard Lincoln is the club’s only central decision-maker left who has presided over the long decay. In the annual report to the Public Facilities District that operates Safeco Field, the Mariners claimed a $3.6 million annual operating loss for 2013.

But that figure is a modest loss on paper relative to the TV revenues accruing to the Mariners and all baseball clubs, which makes the Cano hire a much less risky financial maneuver.

Eighteen months ago, MLB announced new national broadcast rights deals with Fox and TBS that, combined with an existing deal with ESPN, are estimated to be worth $12.4 billion to MLB through 2021, or roughly $60 million per team per year.

Twelve months ago, the Mariners announced a purchase of a majority interest in Root Sports, the regional sports network owned by DirecTV that has for years been the club’s TV outlet. Forbes magazine recently reported that ownership share was 71 percent, and the value of the 18-year deal was $2.5 billion, or about $139 million a year, minus a 29 percent share to DirecTV.

The Mariners and Root steadfastly dismiss Forbes’ annual estimates as guesswork. But even if the Mariners’ share is half of what Forbes claims, say $70 million, the combined local and national annual TV revenue estimates add up to $130 million. This year’s estimated player payroll, including Cano and Felix Hernandez ($22 million annually), is around $93 million.

Looking at it that way, the Mariners’ Cano deal is hardly crazy. They can well afford it. There’s one thing they can ill afford — another failed season.

The club is off to a tidy start — with Cano hitting .391, the Mariners’ 4-2 road trip put them in the AL West lead — but no serious baseball fan puts stock in April’s first week. Cano will deliver; success pivots not on him but the farm-raised youngsters around him.