Mariners’ Cano: ‘We can compete with anybody’

Cano sounded happy with his new team before the home opener Tuesday, which was watched in person by at least 30 of his relatives and friends in the sellout. 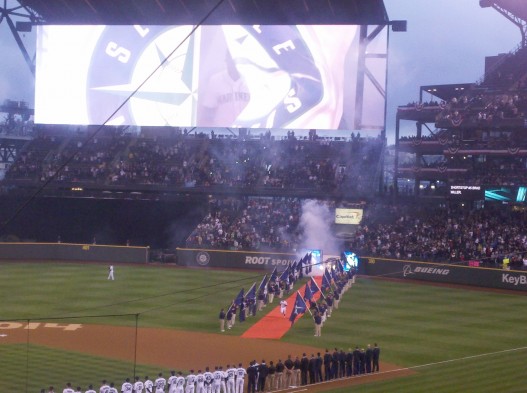 Befitting a gent beginning his 10-year draw on a quarter-billion dollars, Robinson Cano was in a fine mood before the Mariners’ home opener Tuesday night against the Angels.

“This team can compete with anybody, not only in our division, but in the league,” said Cano, surrounded by a couple of dozen media types in the pre-game dugout. “In the past, everybody saw this team as young kids that needed to learn and grow. Now it’s different. Now we’re in a different place, and that’s not something your rivals want to see.”

The Mariners backed up his words on the road, winning four of six in Anaheim and Oakland. Cano hit in all six games, batting .391.

The man considered the New York Yankees’ best player the past few years is now a Mariner after the biggest transaction of the off-season, a stunner on both coasts. It really happened, and Tuesday was his first action in front of the new home town.

“Thank God we’re playing like that. The little things are helping,” Cano said. “We’ll continue doing the same thing. Everything I see wrong, I’m going to tell the guys. Because as a teammate, I cannot let bad things go long. We just have to go out and be good teammates. We have to root for each other and help each other.”

Cano received a roaring ovation from the sellout crowd as he ran in from right field down the red carpet during pre-game introductions.

“This is one of the days you dream of as a kid, coming in before your home crowd,” said Cano, who acknowledged bringing his own rooting section of 30 to 35 for the game. “You get butterflies in your stomach and you hope you come up in a big situation and do your job and see how the crowd reacts.”