Thiel: Lots of ups, one downer in Mariners win

The Seahawks were hailed, the Angels were hell for one inning, James Paxton rallied, then left hurt, and Corey Hart went Paul Bunyan. A wild opening night at the yard. 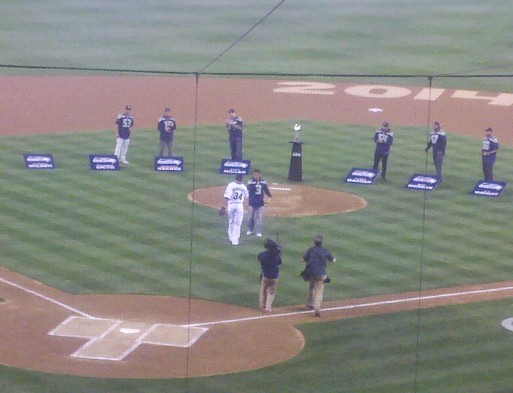 If you’re one to savor emotional whipsaws in sports, you would have enjoyed the time between 6:45 and 7:15 p.m. Wednesday night at Safeco. That’s when coach Pete Carroll and seven Seahawks brought the sellout crowd to its feet for the ceremonial first pitch in the Mariners home opener, and the Angels sat them down unceremoniously with back-to-back homers and a 3-0 lead in the first inning.

That was just beginning of high highs and low lows in the home opener that drew 45,661. In the third inning, Mariners DH Corey Hart drained the buzzkill with a three-run homer to left, and a 4-3 lead.

Then came another downer. In the sixth, rookie lefty James Paxton, who retired 14 batters in a row after being rocked by Albert Pujols (two-run) and David Freese (solo), abruptly asked out of the game with what the Mariners later described as a strain of the latissimus dorsi muscle in his back.

Severity won’t be known until an exam Wednesday. A mild strain can mean just a few weeks of rest. But reliever Stephen Pryor had a lat tear that required surgery and ended his 2013 season.

“It’s just a little strain,” Paxton said in the clubhouse. “I’m going to go get an MRI to see what exactly is going on in there. I just want to be careful right now. My strength is still good, they said, so I just want to get it checked out.”

Then came another upper in the seventh. Hart hit his second homer of the game. The Mariners bullpen picked up for Paxton with a four-inning shutdown and a 5-3 triumph over the Angels to hold the lead in the infant AL West race.

“It was a real good night for the fans, but I’m not a hoopla guy,” said the Mariners’ new manager, Lloyd McClendon, for whom the adjective “crusty” was invented. “I’m glad (the opener) is over.”

Especially because of the ninth, which had its own whipsaw. Closer Fernando Rodney came in to face the Angels’ 3-4-5 hitters. He walked Pujols and Freese, prompting a visit from the manager.

The words must have been epic. Rodney struck out pinch hitter Ian Stewart (Josh Hamilton injured his thumb) and Howie Kendrick, then retired Raul Ibanez on a high fly.

“I can’t even tell you what I said,” McClendon said of his mound oration, eliciting laughter from the gathered scribes. “He was probably was a little ticked at himself. I think he turned it up a little bit.”

If that meant velocity, Rodney hit 98 and 97 mph on his final two pitches.

If you have room for one more wild flip, left fielder Hamilton in the seventh caught a long fly from Hart near the warning track, but in the transfer to his throwing hand dropped the ball. He recovered and threw in to keep Justin Smoak, who had doubled, from advancing.

But McClendon protested to the umpires, and thus began the first video replay in Safeco history. After several minutes, the umpires ruled McClendon was right, overturned the out call and installed Hart at first, holding Smoak at second.

“The rulebook says that the ball has to come into a fielder’s hand to complete a catch,” he said. “Hamilton was trying to transfer to throw, and the catch isn’t completed until the ball is in the bare hand.”

Yet another small triumph. But the potential loss of Paxton loomed larger, because the Mariners are already down two starters, Hisashi Iwakuma and Taijuan Walker.

“He has a slight strain,” McClendon said. “I think it happened the inning before. I saw him shaking his arm a little. I talked to him in the dugout, and he said he was OK.”

But when Kole Calhoun broke the consecutive-outs string with a leadoff single in the sixth, Paxton shook his arm again, and tried to pitch to Angels superstar Mike Trout. That’s when he signaled to the bench he was in trouble.

For the evening, however, Paxton had done enough, thanks largely to Hart.

The 6-6 Hart, dogged by leg injuries for two seasons and a sore forearm lately, looked to be merely a part-time contributor until he rocked the Angels. After Brad Miller reached first on wild pitch following his strikeout, Robinson Cano walked. Smoak drove in one run with a double, and Hart put the Mariners ahead with a towering shot to left.

“So many guys had been chipping in, and I wasn’t,” said Hart, hitting .167 entering the game. “Tonight was unbelievable. I hadn’t had a whole lot of good baseball history lately, especially on opening night.”

So add Hart’s turnaround onto the piles of whipsaws. It was a great night to have one’s head on a swivel.

As for the pomp and circumstance preceding the game, the introductory cheer for newcomer Cano was robust, but came in second to the frenzy that shook the house when a highlight video preceded the introduction of the Super Bowl champions.

QB Russell Wilson, a one-time minor-league second baseman, was chosen to throw, and he delivered a high strike to battery mate Felix Hernandez.

Before the game, as players met reporters for a little chat, when Wilson was asked if he had seen Mariners fans offering up the Seahawks’ slogan, “Why Not Us?”, something adopted from Wilson’s counsel with his late father, Harrison.

“I think the ‘Why not us?’ idea is a good idea,” Wilson said. “It worked for us for a little bit. I think the biggest thing is just having the belief that you can win a lot of games. Baseball is a long season. They’ve done a great job so far. They’ve got the players to do it. Getting Cano really helps as well. I’m excited for the Mariners to see how far they go.”

And no, Wilson was not concerned over some Seattle fans’ apparent resentment that he threw out the first pitch at the Rangers’ opener. Texas drafted Wilson over the winter in the Rule 5 draft, and gained a lot of spring training publicity when he worked out for a day.

“I don’t pay attention to that stuff,” he said.

But he might want to pay attention to his phone, in case the Mariners call needing pitching help.

Zach Miller and his pay cut

Tuesday was the first time Miller, the Seahawks’ starting tight end, was around the media since his decision to restructure his contract to stay with Seattle rather than be cut and go elsewhere in free agency.

Miller’ old deal would have cost $7 million against the Seahawks cap for next season, with a base of $4.8 million. The new deal cuts his base to $900,000 and a cap hit of nearly $4 million.

Asked if the choice was difficult, Miller said, “Not really. When it came down to it, I wanted to be here and I just wanted to make that happen. Whatever I had to do to be here, that’s what got done.”

“I’ve been around long enough that I know the business of the NFL,” Miller said. “It’s something you hear rumors about. You never know until you hear from the horse’s mouth. I’m just happy to be back. Love to be on this team, love playing with these guys. For me, it never was a question of being anywhere else, I wanted to be here.”