Seattle’s experience with a failing stadium should inform Oakland’s thinking on a replacement for the Coliseum, an idea that has drawn the interest of a wealthy Arab prince. 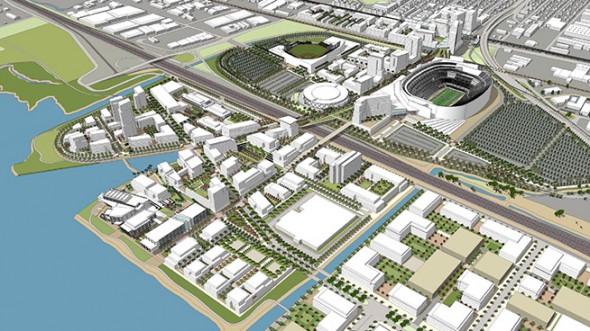 A plan called Coliseum City was disclosed Thursday that features new stadiums for the A’s and Raiders in downtown Oakland. / City of Oakland

A sports anniversary as distinctive as it is dubious is upon Seattle this summer — 20 years ago July 19, waterlogged tiles on the underside of the Kingdome’s ceiling crashed down 180 feet upon unoccupied seats, a couple hours before a Mariners game.

Sheer luck avoided death and injury. The episode ignited an astonishing chain of civic events that transformed the Seattle sports scene and, to some extent, the political landscape. It led to two controversial, publicly funded stadiums that retained the Mariners and Seahawks and led, fairly directly, to the departure of the NBA Sonics and the arrival of the MLS Sounders.

See what happens when a thing is not done right the first time?

With the A’s in town this weekend for three against the Mariners, the anniversary comes to mind for another couple of reasons:

Oakland Mayor Jean Quan told 95.7 The Game radio that the future ruler of Dubai has partnered with a development team working to build sports stadiums and an entertainment center at the Coliseum complex.

Called Coliseum City,  the massive project has been in discussion for two years. An Oakland Tribune story Friday did not include a price tag for the project, but identified Hamdan bin Mohammaed Al Maktoum as the crown prince of Dubai, a Persian Gulf emirate ruled by his father, Mohamed bin Rashid Al Maktoum, who was said to have a net worth of more than $4 billion.

Quan said that the developers working on Coliseum City “are partnered literally with the prince of Dubai, who is next in line to lead Dubai. And they have capital.”

Whether anything will come of this disclosure is hard to say. In any sports market, entrepreneurs, dreamers and well-meaning civic boosters offer stadium plans that come and go. I claim no expertise in the stadium politics of Oakland/San Francisco.

But I do know the A’s lease Coliseum lease is up in 2015, and I do know that the Mariners-A’s postponement was, rather than a game-time rain, a facilities failure. They didn’t cover the infield during overnight showers, creating what Mariners manager Lloyd McClendon said was “the worst conditions I’ve ever seen.” GM Jack Zduriencik was said to be irked because the schedule disruption was avoidable.

The poor field drainage follows persistent water problems in the stadium itself, built in 1966 and 22 feet below sea level. The Mariners were again victims after a June 17 game against the A’s that became a national joke. According to the San Francisco Chronicle:

Raw sewage backed up into both clubhouse shower areas, the umpires’ room and all bathrooms on the clubhouse level, as well as both managers’ offices and the Mariners’ training room. The umpires left without showering, as did much of the Mariners’ coaching staff and manager Eric Wedge.

In the post-game words of Oakland A’s pitcher A.J. Griffin, ”Make sure everybody finds out about this sewage thing. We need to get a new stadium.”

As a frequent visitor to Oakland, the Mariners — and to a lesser extent, the Seahawks — have an interest in a solution because they have expensive talent prancing upon the ever-wretched sod. In the bigger picture, once a public stadium becomes a safety hazard to players and fans, woe be to the electeds, who will be forced to pay millions of tax dollars to fix the problems/pay the settlements.

In the Seattle experience, if the Kingdome tiles, saturated by an exterior power-washing that leaked through the porous concrete, had fallen two hours later atop fans, the deaths would be civic wounds felt to this day.

As it was, the Kingdome was closed and the Mariners were forced to play 22 consecutive games on the road before labor strife ended the season prematurely for all of MLB. The dome re-opened Nov. 4 for a Seahawks game, after $51 million in emergency funding was spent to remove all the tiles and spray on an insulating foam. The hasty project resulted in the deaths of two workers.

The repair money was rolled into the cost of the Kingdome’s replacement, the Seahawks football stadium, approved by a statewide vote in 1997. That means taxpayers will be paying for the roof failure of the Kingdome — a building that lasted just six more years — for the 30-year life of the construction bonds.

While the cities and circumstances are a little different, Seattle and Oakland shared a 1960s vision for economical, multi-purpose, publicly funded stadiums that served the primary purpose in bringing pro sports to town. But both buildings had design flaws that doomed them.

Seattle fixed its problems with more than $1 billion worth of stadiums that were built in a 1990s era in which the federal government had budget surpluses and state government had funds to spend on projects that weren’t necessarily needs but wants.

Circumstances have changed. Government at any level, any place, is not operating well, and neither Oakland nor Seattle is likely to get new sports arenas that have much, if any, public participation.

A’s owner Lew Wolff has in the past made clear his desire for a replacement stadium on the site of the current Coliseum, not the Coliseum City location. His implied threat is if he doesn’t get what he wants, he might attempt to move the team to San Jose.

I’m not sure who or what to believe. What I do know is that in the last couple of visits, the  Mariners have found themselves ankle deep in the Coliseum in either mud or crap, which is rarely a good thing for guests.

Worth considering: Seattle owes its retention of the Mariners to a Japanese video-game maker. The NBA Nets owe their new digs in Brooklyn to a Russian oligarch.

If an Arab prince has shown an interest in reviving Oakland’s downtown core through private investment in sports stadiums, I would recommend Lew Wolff,  Mayor Quan and A’s manager Bob Melvin scurry over to Dubai this weekend to see if His Royal Highness wants to see them jump.

If he says yes, they should inquire as to how high.

And then, as a favor to Seattle sports, ask him if he likes basketball.