The Mariners (6-5), having lost two straight to Oakland, begin a seven-game road trip Monday with four games in Arlington against the Texas Rangers 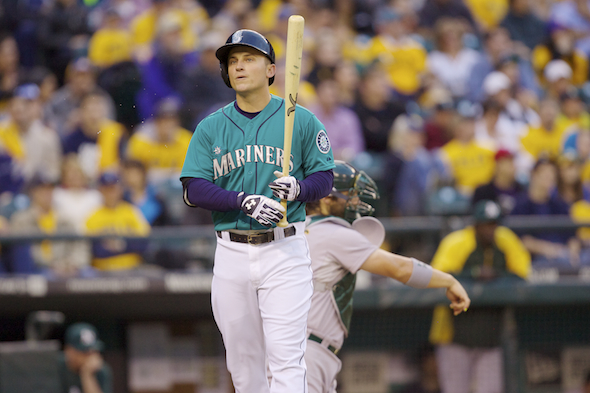 Kyle Seagler has been struggling at the plate since August. He’s 4-for-41 this season with no home runs. / Drew Sellers, Sportspress Northwest

Until Sunday’s series-ender with the Oakland Athletics at Safeco Field, the Mariners stood as one of two major league teams that had not lost consecutive games. That stat crashed with Scott Kazmir’s nine strikeouts in six innings and a two-run Yoenis Cespedes home run off Charlie Furbush in the eighth in what became a 3-0 defeat.

Not only have the Mariners lost two in a row and five of eight since the first 3-0 start to a season since 1995, they have been blanked twice in their past four games. Only one other Seattle team in the last decade (2012) suffered as many as two shutouts in the first 11 contests of a season.

Per Art Thiel’s Sunday post, “Mariners Get More Good Pitching, But . . .”, we are advised by manager Lloyd McClendon not to be overly concerned with the recent absence of offensive production, which peaked during the season-opening series with the Angels when the Mariners batted .309 with a .389 on-base percentage, a slugging mark of .591 and an OPS of .890. In the five-game home stand, the Mariners hit .190/.250/.294/.544.

While 11 games is not enough of a sample to label anything a trend, even the optimistic McClendon can’t help but be concerned about Kyle Seager, who is 4-for-41 (.121) with no home runs and one RBI in 10 games.

Still outstanding defensively, Seager delivered three solid offensive years between 2011-13, the last two especially noteworthy when he had a combined 42 home runs and 155 RBIs. But Seager has been circling the drain since August after a remarkable July in which his OPS was 1.100.

MARINERS VS. RANGERS: Monday’s Mariners-Rangers game is the first of 19 between the AL West rivals. The highlight of the four-game series is Wednesday when Felix Hernandez contests Yu Darvish for the first time since July 14, 2012.

The Rangers have taken the season series six consecutive years and nine of the last 10, including a 12-7 win in 2013. Although the Rangers have won three straight, four of five and 10 of the last 15 against Seattle and hold a 71-43 edge since the start of 2008, they have dropped their last two series to the Mariners in Arlington.

RANGERS NOTES: The Mariners will not see 3B Adrian Beltre, but could see Hector Noesi, summoned from AAA to replace Beltre, who has been placed on the 15-day DL with an injured left quadriceps muscle. The Mariners traded Noesi to the Rangers last week for cash after designating him for assignment following the walk-off home run he allowed to Coco Crisp of Oakland April 3 . . . Shin-Soo Choo, a Mariner from 2005-06 before his trade to Cleveland for Ben Broussard, has been on base 24 times, tied for T9 in the majors. Choo is batting .302/.436/.395/.832. By way of comparison, Robinson Cano is hitting .333/.417/.381/.798.

Al WEST:  Angels Mike Trout, Alfred Pujols and Raul Ibanez hit back-to-back-to-back home runs in the first inning Sunday against Bartolo Colon of the Mets en route to a 14-2 victory (the 42-year-old Ibanez already has three home runs). The Angels are the first team to do that in the first inning of a game since Baltimore May 10, 2012 (Ryan Flaherty, J.J. Hardy, Nick Markakis off Colby Lewis, who will start against the Mariners Monday night).

EX-MARINERS: Shawn Kelly (2009-12), who took over as the Yankees closer last week, collected his third save Sunday with a 1-2-3 inning against the Boston Red Sox. Kelly is one of three closers with three “perfect” saves this season (also Craig Kimbrel and Jonathan Papelbon). Kelly collected the save in large part because Ichiro robbed David Ortiz of extra bases in the eighth inning, crashing into the outfield fence for a spectacular catch.

Aaron Harang, who went 5-11, 5.76 for the Mariners last season, is 2-1 for the Atlanta Braves after recording a 10-2 win Sunday. Harang allowed five hits with five strikeouts and one walk in defeating the Washington Nationals.

NEXT: The Mariners Monday will send 25-year-old Cuban Roenis Elias (0-1, 2.70) to oppose Colby Lewis, in his first MLB appearance since July 18, 2012. Lewis went 32-29 with a 3.93 ERA for the Rangers from 2010-12 before undergoing flexor tendon and hip replacement surgery. Elias made a pair of solid five-inning starts but has yet to pick up a win despite allowing a combined six hits and three runs. Elias is trying to make the jump from AA.