New uniforms for Huskies football are out, said to capture the “jaws of Husky Stadium” along with “arctic blasts.” At least one tradition was maintained — a Nike swoosh. 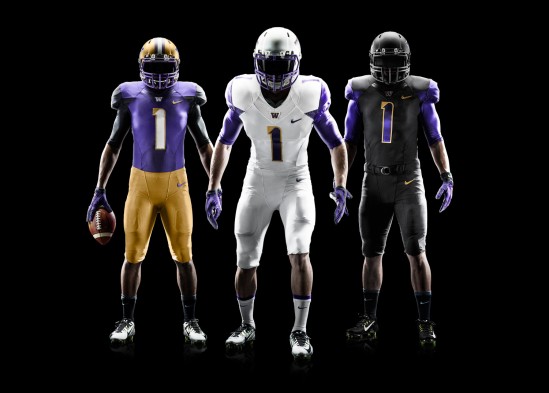 The Huskies will be in new duds for the new stadium and a new coach, thanks to an old partner — Nike. / Nike.com

Washington football completed its makeover, from stadium down to shoes, with a new set of uniforms, revealed Friday, designed to press the bling button on current and future Huskies while avoiding the trick-or-treat fashions of other schools. Speaking of which, Nike, which popularized garish outerwear at its primary retail outlet, the University of Oregon, is the designer/outfitter for Washington too. Remember, this is college sports: It’s all about the money.

The new set includes three jerseys, four pants and three helmet colors, which can clash together in multiple ways. A UW release said that “the new stadium and athletic facilities are filled with Husky references, echoing the team ethos that ‘no dog runs alone.'”

A graphic symbol and coded sequence embroidered into the back inside neckline is said to “reinforce this mantra.” Apparently designed to represent “team dogs,” the symbol, when turned sideways, make the numeral 11 to honor the team’s 11 players. Like a sled team, it said, the team “competes as a pack through innovative formations on the field.”

Further straining, the release says the purple home jersey introduces black accents “for a tough, bold aesthetic.” Black shoulder panels are said to mimic the “iconic jaws of Husky Stadium.” The away uni is white, harnessing the power of an “arctic blast.” The black alternate jersey has purple and gold accents, with “Dawgs” lettering down the side of the pant.

“Our players can’t wait to take the field in these uniforms,” said new coach Chris Petersen. “The design tells the story of our program and provides modern innovations in materials and designs while embracing the rich tradition that has made Husky football so special.”

Besides the cool look, the redesign apparently supplied some work for English majors looking to break into advertising, although the release did fail to mention the prominent placement of the Nike swoosh on the jersey chest.

Apparently, if a team can’t beat Oregon, at least they can dress like Ducks success.