The Huskies finished spring football practice with no clear starter at QB or RB. Fortunately for coach Chris Petersen, the early schedule will be an extension of spring practice. 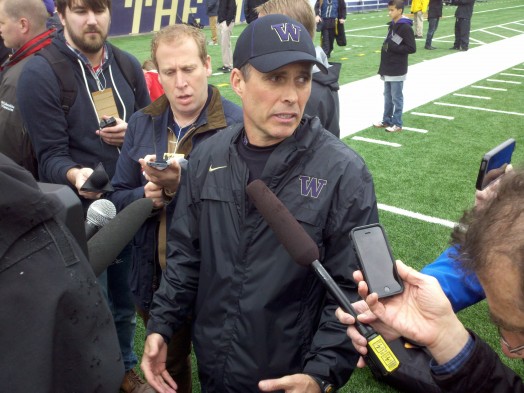 Chris Petersen claims to have no clear idea about who starts at either quaretrback or running back. / Art Thiel, Sportspress Northwest

For much of the century, the Washington Huskies benefited from large production by Jake Locker/Keith Price at quarterback and Chris Polk/Bishop Sankey at running back.

At the end of 2014 spring football practice, a contradictory void fairly screams: The new coach doesn’t own up to a real idea as to who in the fall will succeed the stars at either spot.

Chris Petersen even conceded the possibility of an alternating tandem at QB with Jeff  Lindquist and Troy Williams.

“I don’t think anyone likes that, but we’re going to do whatever we have to to give ourselves the best chance to win,” Petersen said after the final  scrimmage Saturday on a damp, cool day Husky Stadium that drew maybe a couple thousand of the curious. “I know everyone’s waiting for a starting quarterback. We don’t have that.

“It’s always nice to have a starting quarterback. But that guy (Price) graduated in December. We’re at square one until one guy establishes himself.”

The QB mystery deepens because of spring absence of Cyler Miles, the presumed incumbent and Colorado native who decided to wear a Broncos hat to a Seahawks fan celebration party Feb. 2, apparently attempting to replicate the experience wearing of a pork chop to a wolf pack.

The subsequent fight has him and fellow knucklehead Damore’ea Stringfellow suspended indefinitely by Petersen, an awkward drama that apparently will spill into the summer before we learn whether further lashings will be administered.

Over at running back, the successor to Polk/Sankey is equally nebulous, but the position also has a tear-jerker saga that has purple sentiment all in his corner, for whatever that is worth.

Deontae Cooper, who has as many career ACL-repair surgeries as touchdowns (three), is temporarily the leader, but the competition in the last week was missing Jesse Callier and Dwayne Washington, out with reportedly minor injuries. Saturday, Cooper had 68 yards in nine carries, including a nifty cut on one run that did not appear as if it was made by a man whose knees must look like a map of the Amazon River basin drainage.

The other healthy RB, redshirt freshman Lavon Coleman, cocked a few eyebrows with 99 yards in 18 carries, including a 47-yard reversal-of-field sprint that was the big-play highlight of the soggy 11-on-11 exercise.

For the millionty-millionth time since his return to the field prior to the 2013 season — he was voted the team’s most inspirational player at year’s end — Cooper was asked how he was feeling.

“I feel stronger,” he said, polite as ever. ” I’m doing the weights I used to do. The more I do in the weight room, the better I feel out here.”

A sculpted 200-pounder from Perris, CA., Cooper is solid in every way as a candidate to start, particularly after a breakthrough game last season at Oregon State, when he went for 166 yards, including carries of 68 and 70. The coaching change, after Steve Sarkisian decamped to USC, seems as if it has benefited him.

“What was exciting for me was the new coaching staff,” he said. “With Sark and his staff, it was always, ‘He’s had three knee injuries.’ With this staff, they gave me a fresh start. They knew about it, but they weren’t worried about it.

“And definitely there’s a lot more teaching going on. I don’t know if that’s because it’s spring ball, but there’s definitely a lot.”

He is in position to absorb a lot of education. Because of his repeated injuries, Cooper, a senior, was granted by the NCAA an additional three years of eligibility, meaning he could stay at Washington until, say, the viaduct-replacement project starts up again.

Not that he would, exactly.

Asked to look into his future, he said, “I can see myself being at camp with coach Pete, but I can’t predict (staying three years) because I couldn’t predict three injuries. We’re gonna take it one step at a time.”

If anyone is entitled to take each day as it comes, it is Cooper.

“He’s making hard cuts and splitting defenders, step in the right directions,” Petersen said. “Days like today are really good for him, to be ‘live’ and realize his knee is good, and he can go. He’ll get there with another few months of training.”

At least at running back, having no clear No. 1 is not crucial yet, because all likely will see some action without a huge falloff. That’s particularly true given the schedule. Fans will have to go to Baskin & Robbins to find more flavors of ice cream than the Huskies have in their first four games: Hawaii, Eastern Washington, Illinois and Georgia State.

When a college team is managing the mess of a coaching transition, having dessert first apparently is considered acceptable etiquette.

Speaking of managing the transition, Petersen was asked what the biggest accomplishment was to date.

“I think we got the structure down,” he said. “The system has been introduced. Everything from how we lift to how we practice, has been established. Now we have to get better —  tightening up the details on everything.