The Mariners open a three-game series against the wretched Houston Astros Monday with an offense that is near historic franchise lows. 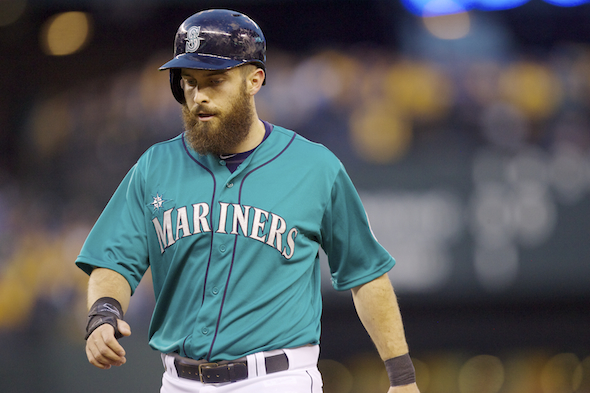 Outfielder Dustin Ackley has been the most productive hitter on a Seattle offense that has struggled after sweeping the Angels to open the season. Ackley is hitting .279 with 10 RBIs. / Drew Sellers, Sportspress Northwest

After a seven-game road trip in which they suffered two walk-off losses, were shut out twice, lost three times to a last-place team, left 55 men on base, and came away with only one victory, the Mariners still have reason to hope: Felix Hernandez takes the mound  Monday to open a three-game home series with the worst team in baseball, the Houston Astros.

The last time King Felix pitched, Wednesday in Arlington, the Mariners, as is their irksome habit, sprayed graffiti all over another of his masterpieces by taking a 2-0 lead he handed them entering the eighth and turning it into a 3-2 walk-off loss.

Pitching the best ball of his career (3-0, 1.91 ERA, 0.99 WHIP), Hernandez should breeze Monday against the Astros, who are 3-14 following a 2-0 start and feature an offense that makes the Mariners look regal.

If you have gnashed teeth over the generally lame Seattle offense, which went 0-for-8 with runners in scoring position Sunday against what had been the NL East’s last-place team before the Mariners arrived in South Beach, consider how unfavorably the Astros compare to the Mariners offensively.

This makes a sweep of the Astros series, especially with Hernandez pitching Monday, almost imperative if the Mariners are going to play .500 or better in April, which is the surest metric as to how the season will unfold.

Seattle’s six-game losing streak is tempered by the fact that three of the team’s best pitchers, injured starters Hisashi Iwakuma, Taijuan Walker and James Paxton, will return by May and not only buttress the rotation, but provide relief for the bullpen, which manager Lloyd McClendon calls “the backbone of the team.”

But what of the bats? Consider the Mariners’ OPS (on-base plus slugging), referenced above. At .645, it’s marginally better than Houston’s .603.

It tells a lot when the addition of career .309 hitter Robinson Cano results in the Mariners having a team batting average 12 points (.225 vs. .237) worse than last year.

KING FELIX: Every time Hernandez pitches, the Mariners pump out a rash of numbers, in fact a full page’s worth, extolling his feats and accomplishments. Of course, numbers aren’t necessary to tell you what the eye can plainly see: He’s among the best of his generation and, without him, the Mariners would be the Houston Astros. But numbers illustrate and illuminate.

Hernandez has pitched long enough – 10 years already! – that his numbers have real meaning. This is a favorite, and has nothing to do with wins, losses or ERA, but underscores what a competitor he is.

Since Hernandez entered the American League in August of 2005 as a 19-year-old phenom, batters have hit .226 off him with runners in scoring position. That .226 splits the difference between Randy Johnson’s .219 and Greg Maddux’s 249. But among pitchers of his generation (since 2005), this is how King Felix ranks:

Also, if Hernandez defeats the Astros Monday night, he will join Jamie Moyer (2001, 2005) as the only pitchers in franchise history to twice start a season 4-0.

AL WEST: Oakland (13-5) completed a three-game sweep of the Astros Sunday and has the best record in the American League despite a defense that has committed 19 errors, most in the league . . . In the Angels’ 2-1 loss to Detroit Sunday, L.A. committed three slapstick errors on one play. Detroit’s Ian Kinsler was on first and began running on a 3-2 pitch to Miguel Cabrera. It was ball four, but catcher Hank Conger threw to second anyway, and the ball sailed into center field. Kinsler took third, and when center fielder Mike Trout’s throw back to the infield went past the second baseman and shortstop, the Detroit runner tried to score. It looked as if the Angels would have a play on Kinsler, but pitcher Hector Santiago picked up the ball and threw wildly to the plate. Kinsler scored and Cabrera went to second.

EX-MARINERS: In three starts for the Yankees, RHP Michael Pineda, who went to New York in the Jesus Montero-Hector Noesi trade, is 2-1 with a 1.00 ERA and 1.09 WHIP . . . Aaron Harang, with Seattle in 2013, held the Mets hitless through seven innings in his last start before departing after 121 pitches. That marked the second time in Harang’s career that he was removed after starting the game with at least six no-hit innings. He held the Dodgers hitless through six July 9, 2011, while pitching for the Padres.

FURTHER REVIEW: When Giancarlo Stanton hit that walk-off grand slam Friday night against Seattle reliever Yoervis Medina, he became one of just two players in history with two walk-off slams before his 25th birthday. The other was Jimmy Presley, who had two for the Mariners in 1986 . . . Henderson Alvarez threw a two-hit, complete-game shutout over the Mariners Saturday night despite the fact that Seattle had eight left-handers in the lineup to contest the Venezuelan right-hander. Alvarez also generated more offense than the entire Seattle lineup, driving in a run in the sixth-inning with a broken-bat single.