In the face of site opposition, Warriors owners picked a new spot — just south of the Giants ballpark — and picked up the entire tab for land and construction, eliminating taxpayer politics. 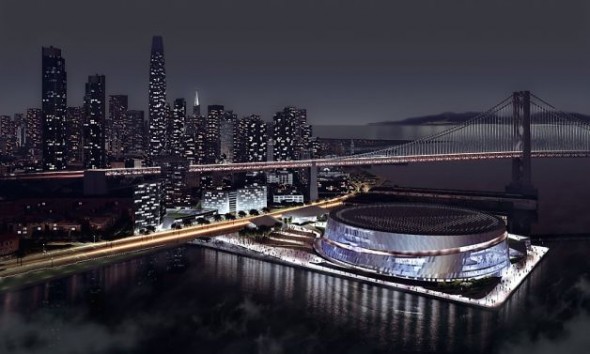 The plan to put an NBA arena on abandoned public piers in San Francisco was abandoned in favor of 12 acres south of the Giants ballpark. / Golden State Warriors

Joe Lacob and Peter Guber, owners of the Golden State Warriors who caused a stir two years ago when they announced a plan to build a new arena on a controversial site on piers on the San Francisco waterfront, abandoned the idea and now intend to build on land south of the Giants’ baseball park to house an 18,000-seat venue in time for the 2018-19 season.

According to SF Weekly and San Francisco Chronicle, which reported the story Monday, neither the 12-acre purchase of land nor the construction of the arena will require public funding, perhaps the first sports venue of its kind in the country that will use no taxpayer money or resources. The deal reportedly was closed Saturday night to purchase the site from salesforce.com, a San Francisco tech company.

The development is similar to Seattle native Chris Hansen’s plans for an 18,000-seat arena in SoDo. But Hansen, who owns the seven acres south of Safeco Field, has asked the city and county for up to $200 million from the city’s borrowing capacity, to be paid back over the presumed 30-year lease, to fund arena construction. No tax increases were sought to pay for the building.

The proposal, outlined in a 2012 memorandum of understanding between Hansen and the municipalities, does not require a public vote, but does require Hansen to have an NBA team in hand prior to funding. Hansen was denied by NBA owners a year ago a bid to relocate the Kings from Sacramento.

Besides the unprecedented commitment to all-private funding, the Warriors development illuminates another contrast: A willingness from the team owners to change location and plan in the face of opposition to both.

Critics in San Francisco complained that the proposed 120-foot high arena on piers 30-32 would increase traffic and parking problems, have serious environmental impacts during construction and would block views of the Bay Bridge.

In Seattle, opponents of the SoDo location next door to downtown and opposite a busy deepwater port, say the area is already congested and will only grow worse. Hansen has never wavered in his commitment to the SoDo site.

In the state-required environmental impact statement now being completed for the arena, two Seattle Center sites were used as comparables. But Hansen said he has no interest in the sites. No sites outside Seattle were considered because Hansen’s agreement is with the city.

The final EIS is not expected before September.

Since the MOU was signed, Hansen’s chief political ally, Mayor Mike McGinn, lost his bid for re-election, and the council, with the addition of socialist Kshama Sawant, has tilted even further left. A shift of the arena site away from the port to city-owned property, which would help revitalize Seattle Center, has been speculated to be helpful for Hansen in regaining lost political momentum.

The San Francisco site, on Mission Bay, has a light-rail site in front of it and two adjacent parking garages for more than 2,000 cars. The Hansen site contains no plan for additional public parking.

The Warriors continue to play in Oakland at the Oracle Arena, built in 1966 and remodeled in 1997.