Terrelle Pryor was on the outs in Oakland, where Matt Schaub was signed in free agency. His size athleticism may make him a candidate for wide receiver or tight end. 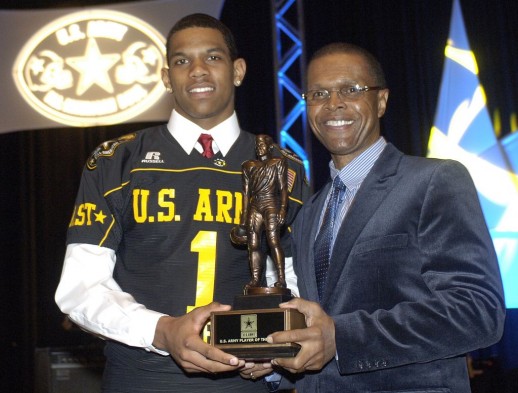 The Seahawks pulled off a surprise Monday when they traded a seventh-round pick in next month’s draft to Oakland for quarterback Terrelle Pryor, who was moved out of the starting job when the Raiders signed free agent Matt Schaub from Houston. “Terrelle is an incredibly explosive athlete and we’re excited for him to come in and compete,” said John Schneider, Seahawks general manager, in a club release.

Pryor, a native of Jeannette, PA., started the first eight games in 2013 before injuring a knee. His replacement, Matt McGloin, took over and kept the job until the season’s final week. Since Schaub and McGloin will compete for the No. 1 position, Pryor asked the Raiders for his release. GM Reggie McKenzie instead found a trading partner.

Presumably he will compete for the third QB job with B.J. Daniels behind Russell Wilson and backup Tarvaris Jackson. But Schneider’s reference to him as an explosive athlete raises the possibility that he may be tried at receiver or tight end, or become a “slash” player such Antwaan Randle El and Kordell Stewart were for the Pittsburgh Steelers.

Pryor admitted before the 2013 season that he didn’t have proper throwing mechanics.

“I never really knew how to throw a football before,” Pryor told the Bay Area News Group. “It’s coming along. I’m getting way better.”

Pryor was a subject of controversy at the end of his stellar carrier career at Ohio State (2008-10), where he was MVP of the 2010 Rose Bowl when the Buckeyes beat Oregon 26-17. He was among players who were in receipt of improper benefits, according to NCAA rules, which eventually led to the resignation of coach Jim Tressel. Pryor was reported to have made thousands of dollars signing memorabilia, which his attorney denied.

Pryor eventually quit school and made himself available in the 2011 supplemental draft, where he was taken by the Raiders in the third round. He played in 15 games with 10 starts in three seasons in Oakland, completing 170 of 302 passes (56.3 percent) for 1,953 yards, nine touchdowns, 12 interceptions and a 69.3 passer rating.

He also rushed 93 times for 627 yards for a 6.7 average with three touchdowns.