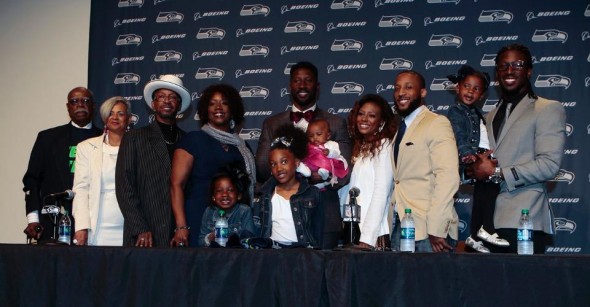 Surrounded by family, Marcus Trufant retired in style from the Seahawks Thursday. / Seahawks.com

Former cornerback Marcus Trufant formally retired from the National Football League Thursday and did so, per his preference, as a member of the Seattle Seahawks after signing a one-day contract. Trufant, a Wilson High School (Tacoma) and Washington State University graduate,  joined the Seahawks as the 11th overall pick in the 2003 draft and played in 136 games (125 starts) through 2012.

“They stuck to their word and really made it happen,” Trufant said at Seahawks headquarters in Renton, surrounded by family, friends and teammates. “After that, it was just a bunch of text messages and Facebook messages to all my friends and family to get them out.

Trufant was named to the Pro Football Weekly All-Rookie Team in 2003, recording 78 tackles (69 solo), two interceptions and a team-high 20 passes defensed while starting all 16 games.

In 2004, he became the fourth cornerback in NFL history to lead a team in tackles when he recorded a career-high 93 (83 solo). He also tied his career-high with 20 passes defensed (2003).

Following his career with the Seahawks, Trufant signed with the Jacksonville Jaguars, but did not play in a regular-season game. At the time he left for Jacksonville, coach Pete Carroll and GM John Schneider told him that if the opportunity presented itself for him to retire as a Seahawk, they would allow him to do so.

Trufant explained that his decision to walk away from the NFL stems from from physical wear and tear.

“My body was giving out on me a little bit,” Trufant said. “I’m staying in shape, but trying to tackle 230-pound running backs day in and day out, it was just my time to go. I can’t see myself doing that now. I had a nice run and I have no complaints.”

At Wilson, Trufant was first-team All-State. He became a starter at Washington State as a freshman and was a second-team Associated Press All-America selection as a senior.

Voted to the Pro Bowl after the 2007 season, Trufant tied the franchise record with three interceptions in a game, Dec. 9, 2007 vs. Arizona, returning one 84 yards to a touchdown. He started a franchise-high 11 postseason games as a member of the Seahawks.