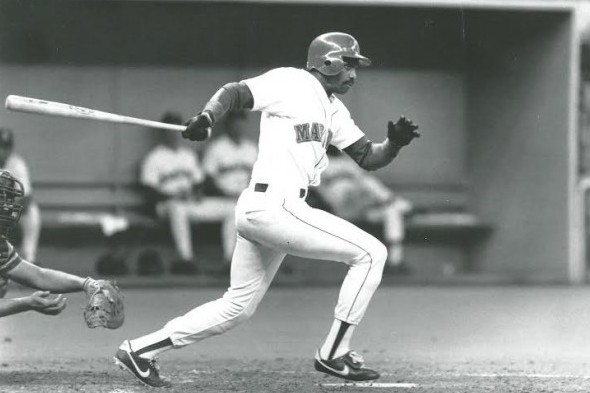 Former Mariner star Alvin Davis, the 1984 AL Rookie of the Year, was one of seven individuals elected Saturday to the State of Washington Sports Hall of Fame. / David Eskenazi Collection

The Washington State Sports Hall of Fame Saturday announced its 2014 class, which includes retired sportscaster Keith Jackson, former Washington State quarterback Jack Thompson and “Mr. Mariner,” Alvin Davis. The trio was selected by a statewide panel of voters and raises the number of inductees to 189.

“This is a bigger class than usual,” said Marc Blau, executive director of the Hall of Fame. “The voting by our statewide panel was so close that we decided a larger class was justified. There was also a feeling among many voters that every one of these 2014 inductees absolutely deserved to be voted in, and the sooner the better.”

A network TV broadcaster best known for his college football work on ABC, Jackson began his career at Washington State University. After graduating from WSU, he worked at KOMO radio and KOMO-TV from 1954-64 before departing for network television.

Thompson, the “Throwin’ Samoan,” ended his football career at Washington State (1975-78) as the most prolific passer in NCAA history with 7,818 yards. He is one of only two Cougars players to have his jersey number (14) retired.

Davis spent eight of his nine major league seasons with the Seattle Mariners and was the American League Rookie of he Year in 1984. A lifetime .280 hitter and one-time All-Star, Davis was the first inductee in the Mariners Hall of Fame (1997).

A Newport High graduate, Hanauer won 61 unlimited hydroplane races, including a record 11 Gold Cups. He entered the Motorsports Hall of Fame in 1995 at age 40, the youngest driver ever enshrined.

A native of Germany, Schrempf graduated from Centralia High and then spent four years under Marv Harshman at the University of Washington. He made All-Pac-10 and helped the Huskies to a pair of NCAA Tournament berths. Schrempf played in the NBA from 1985-01 with Dallas, Indianapolis, Seattle and Portland, and was a three-time All-Star.

A Spokane native and graduate of Lewis and Clark High and Eastern Washington University, Sneva won the 1983 Indianapolis 500 and season Indy Car titles in 1977 and 1978. In 1977, Sneva became the first driver to qualify for the Indianapolis 500 at more than 200 mph.

Feigner dazzled softball audiences from 1946-2000, traveling around the world with the “King (Feigner) and his Court.” A Walla Walla native, Feigner threw more than 900 no-hitters during his career.

Sneva, Thompson, Hanauer and Jackson will be formally enshrined in the Hall of Fame Aug. 28 in Seattle when Washington State plays Rutgers in its season football opener at CenturyLink Field.

Davis, Feigner, Schrempf and former Sonics great Gary Payton will be honored at a still-to-be determined Mariners game. Payton made the Hall of Fame last year, but scheduling conflicts prevented his formal induction.

The Washington State Sports Hall of Fame was started by late sportscaster Clay Huntington in Tacoma in 1960, and is in the Tacoma Dome.