Thiel: Dempsey-Martins pair ‘as good as it gets’

Four goals in 30 minutes, two by Clint Dempsey and one by Obafemi Martins, offered up an eloquent case that the Sounders’ tandem is the best in MLS. 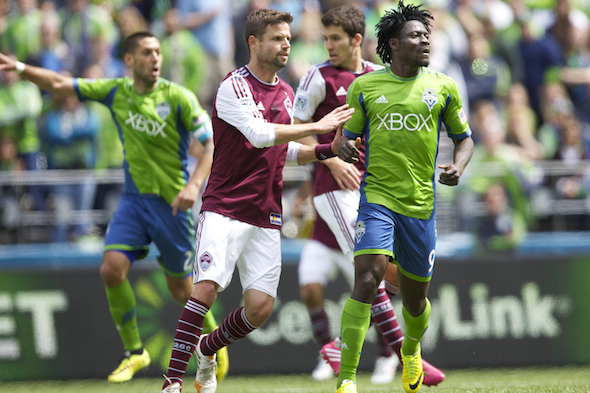 Early in the season, the Sounders committed the unpardonable when they spit up on themselves at home, losing twice at the place that is regarded as the MLS version of Tolkien’s Mordor, a fortress surrounded by stink and fear and extra-long DMV lines.

Saturday, the make-up began. Battering the visitors from Denver as their sibling Seahawks thrashed the Broncos three months earlier, the Sounders’ 4-1 triumph over the Colorado Rapids could easily have been 8-1, or 43-8, for that matter.

Featuring Clint Dempsey and Obafemi Martins as synched up as they’ve been in Seattle — “it was beautiful football at times,” teammate Dylan Remick said — the Sounders put it together offensively and defensively in the manner envisioned when Dempsey shocked the soccer world in August by leaving the EPL for American futbol.

Asked if his stars were the best offensive tandem in MLS, coach Sigi Schmid said, “Right now, based on goals, production and points, I think they are. People could make a case for (the LA Galaxy’s) Robbie Keane and Landon Donovan — those guys together are pretty good —  but right now Dempsey and Martins are as good as it gets in our league.”

A four-goal blitz over 30 minutes had Dempsey scoring twice — he leads the league with eight goals — and Martins once, with Lamar Neagle throwing in after consecutive brilliant passes from Dempsey and Martins. The tandem has contributed to 16 of Seattle’s 18 goals this season.

In the likely case that Schmid is biased, take it from Rapids coach Pablo Mastroeni.

“The two guys up top really made a difference,” he said. “Martins and Dempsey really caused us a bit of grief.”

Particularly noteworthy was the first goal, not just because it was a first-half, stoppage-time score that deflated the Rapids entering halftime, but because of its sublime teamwork.

A full-field buildup brought the ball to Martins in the Colorado half. He fired straight ahead a laser to Dempsey, already on a goalward charge past the defense. Goalkeeper Clint Irwin had no choice but to come off his line to confront Dempsey, who slipped around him a ground-bound shot that deflected off defender Drew Moor, hastily attempting to fill the goal void. The carom landed at the feet of Neagle, who drained the gimme putt for perhaps the easiest score of his career.

The seamless ball-handling has been growing during the early season, helping account for a 3-0-1 run that will have the 5-2-1 Sounders at or near top of the West, depending on other weekend outcomes. The Sounders have scored in all eight games, extending a club record.

“We always try to put them together (in practice) so they can look for each other, and you see that showing in the game,” Schmid said. “The (tricky maneuvers) they combine with is pretty pleasurable to watch.”

The Sounders started the second half with the intent to put away the game, and did. Dempsey scored twice in five minutes, the first at 47′ on one of those pleasure-to-watch moments.

Directly in front of the goal, he spun 360 degrees and back-heeled a pass, then headed goalward where a rebound off Irwin awaited him like a pumpkin.

Five minutes later, he received a header from Chad Marshall and headed the ball in a perfect arc over Irwin, who in another vain attempt to control Dempsey, mistakenly came off his line again and exposed the goal.

After a Colorado goal by Dillon Serna spoiled a clean sheet for GK Stefan Frei, Martins finished the scoring in the 75th minute, after being thwarted during a five-minute sequence in the first half in which he had three good looks. The Sounders outshot Colorado 20-10 including 13-4 on frame.

The progress Seattle has made since last season’s awkward insertion of Dempsey, which helped lead to an epic late-season collapse, has been remarkable.

“When I first came, I felt like there weren’t too many games I could look back and say, ‘You know what, I had a lot of chances I should have scored,’” Dempsey said. “I have to compliment my teammates because they’re getting in better positions in front of goal — I’m getting better looks right in front of goal.

“I’m getting looks that are allowing me to put the ball in the back of the net. I think we’re playing better right now than we were towards the end of last season.”

Way better. Enough to re-ignite the idea that the Clink a fine place to spoil a visitors’ afternoon.

NEXT: The Sounders host the Philadelphia Union at 7 p.m. Saturday, the second of three home matches in a row.