Mariners: The rarity of erasing a 5-run deficit

The Mariners overcame a 5-0 hole to beat Texas Sunday. That marked only the 23rd time since 1995 that the club overcame such a deficit and won. 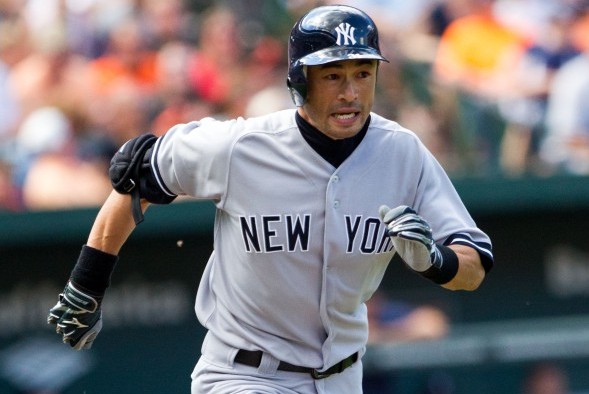 Ichiro is batting .333 in limited appearances for the Yankees while adjusting to the role as the club’s fourth outfielder. / Wiki Commons

Less than a week ago, the Mariners had virtually nothing – save Felix Hernandez — going for them. They fumbled away  eight consecutive games and were on the verge of tumbling into last place in the AL West behind the dreadful Houston Astros. Then Kyle Seager, batting .156 with no home runs and two RBIs, began the most impressive power surge by a Seattle hitter this season.

First came Seager’s two-homer game against the Astros Wednesday that included his walk-off shot delivered to ex-Mariner Josh Fields. Sunday, Seager swatted two more home runs that rallied the Mariners from a 5-0 deficit to a 6-5 victory over division-leading Texas that enabled them to head out on a long road trip with a split in their six-game home stand.

A walk-off home run is certainly more theatrical than chipping away at and overcoming a five-run deficit, but the latter is more unusual. Before Sunday, the Mariners had not dug themselves out of such a hole since Aug. 7, when they trailed the Toronto Blue Jays 7-2 before winning 9-7 on a Humberto Quintero two-run homer.

Since 1995, the Mariners have overcome a deficit of five or more runs to win 23 times. But Sunday’s game marked the first time since April 11, 2011 that Seattle allowed the first five or more runs and went on to win. In that contest, the Mariners trailed 7-0 heading into the bottom of the seventh. After Milton Bradley cut the deficit to 7-1 with a solo homer, the Mariners scored five times in the eighth and won with a two-run, walk-off single by Luis Rodriguez in the ninth.

Of Seattle’s 23 winning rallies from five or more runs down, only 10 have involved a comeback of six or more runs. Over the same span (since 1995), the Mariners have hit 33 walk-off home runs.

OPPONENT BATS: The Mariners begin a 10-game road trip through New York (3 games), Houston (3) and Oakland (4) Tuesday with a pitching staff that has been remarkably effective considering the injury absences of Hisashi Iwakuma, James Paxton and Taijuan Walker. Through Sunday, the Mariners rank third among 15 AL teams in ERA (3.74), second in fewest hits allowed (184), fourth in runs (99) and fourth in earned runs (88).

The Mariners staff also ranks No. 2 in the American League in opponent batting average with runners in scoring position, .194 to Oakland’s .191. If the opponent BA remains under .233 for the season, the Mariners will set a franchise record. Lowest opponent BAs with RISP.

Those Mariners had a especially infamous April, fanning 202 times in 21 games, eight of which featured double digits in K’s. The last five games of that month were particularly odious, Seattle batters whiffing an astonishing 67 times, including 36 times on back-to-back nights April 29-30, when Roger Clemens set them down 20 times in the first game of that terrible twosome.

Following eight more Sunday, this year’s Mariners already have 212 April whiffs and are the only edition of the club since 1986 that has come close to the ’86 club’s 9.61 batter strikeouts per game. The most futile marks since then:

On the subject of batter whiffs, the Mariners catch a break in New York this week. They will miss Japanese sensation Masahiro Tanaka, who pitched Sunday, fanning 11 L.A. Angels. Tanaka has 46 strikeouts, third-most, according to Elias, through the first five major-league starts for any pitcher who debuted since 1900, behind Herb Score (50) and Stephen Strasburg (48).

ICHIRO VS. REPLACEMENTS: After batting .262 with a .639 OPS and 0.8 WAR, Ichiro went on the trading block over the winter. Not surprisingly, the Yankees found no takers for the 40-year-old, former 10-time All-Star and future Hall of Famer after determining his time had come and gone as an everyday player. But Ichiro has adapted well in his new role as New York’s fourth outfielder.

Batting .333 with a .735 OPS in 20 games, Ichiro has become the Yankees’ primary pinch runner and a late-inning defensive replacement for Carlos Beltran or Alfonso Soriano.

One of the reasons the Mariners traded Ichiro to New York in mid-2012 was to give the franchise a fresh start with younger players. No one disputed the wisdom of that, but the Mariners have had a difficult time generating production out of the right field position since Ichiro vacated it.

Since Ichiro departed, the Mariners have trotted out 17 right fielders, including Jason Bay, Mike Morse, Carlos Peguero and Endy Chavez, and, more recently, Corey Hart and Stefan Romero. Since the July 22, 2012 trade, Ichiro is batting .284 with a .313 on-base percentage. His 17 right-field fill-ins are hitting .245 with a .298 OBP. In addition, all of Ichiro’s replacements at the top of the order are batting .244 with an OBP of .282.

AL WEST: Houston’s Collin McHugh, who allowed three hits and fanned 12 in 6.2 innings last Tuesday at Safeco Field, followed that with a 5-1 win over the Oakland A’s Sunday in a game in which he whiffed seven more and allowed three hits. The Mariners are scheduled to see McHugh this weekend when they face the Astros in a three-game series at Minute Maid Park.

NEXT: RHP Chris Young (0-0, 3.50) will start Tuesday’s series opener opposite LHP C.C. Sabathia (3-2, 4.78). The 6-foot-10 Young gave up three runs on four hits with five walks in a seven-inning no-decision against the Astros Wednesday. Sabathia won two straight, benefiting from a combined 24 runs by the Yankees against Tampa Bay and Boston. The Mariners went 3-4 vs. New York last year, including 2-1 win at Yankee Stadium. Seattle has not swept a three-game series in the Bronx since May 3-5, 2002.