The court at Alaska Airlines Arena on the UW campus will have a new look for the 2014-15 season, notably a silhouette of the Seattle skyline and Space Needle. 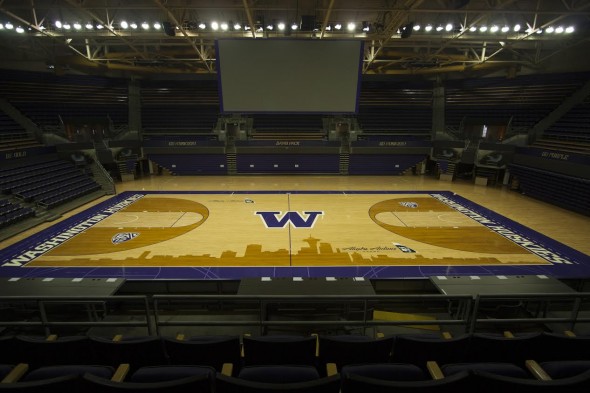 The new court at Alaska Airlines Arena features a baseline-to-baseline silhouette of the Seattle skyline and shaded-in areas marking the 3-point line. / University of Washington

The University of Washington basketball program Thursday unveiled a new court design at Alaska Airlines Arena that features a baseline-to-baseline silhouette of the Seattle skyline with the Space Needle near center court. The floor also features a filled-in 3-point area that matches the wood tint of the skyline silhouette.

Washington began playing at Hec Edmundson Pavilion, which houses Alaska Airlines Arena, Dec. 27, 1927. The Huskies have recorded 946 wins in the facility, the most by any Division I program at its current home arena.

The facility is named in honor of Hec Edmundson, who coached the Huskies from 1921-47 and recorded a 488-195 record, the most victories by any Husky coach.