The Mariners get Hisashi Iwakuma, third in last year’s Cy Young vote, back into their rotation Saturday in Game 2 of a three-game set in Houston. 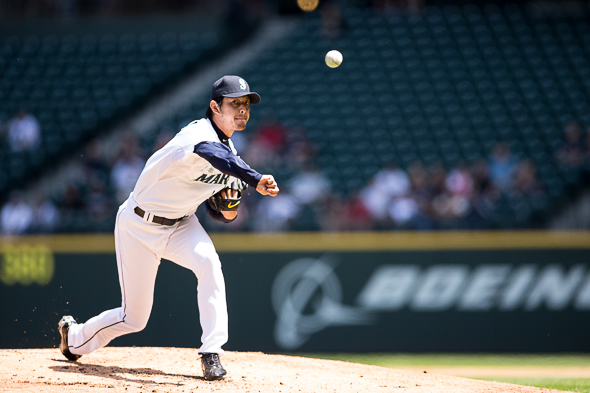 Although he is still on the 15-day disabled list and no official word has come from the Mariners, Hisashi Iwakuma will reportedly rejoin the Seattle rotation Saturday in Houston during its three-game series with the Astros at Minute Maid Park. Greg Johns of MLB.com, who regularly covers the Mariners, was the first to break the story.

The 33-year-old Iwakuma, who finished third in American League Cy Young voting last year, missed all of spring training after spraining a tendon in his right middle finger. He threw four innings in a minor league rehab start Sunday for AAA Tacoma.

To make room for Iwakuma on the 25-man roster, the Mariners will have to move a player prior to Saturday’s 1:10 p.m. game.

As Iwakuma did last year, he will take the rotation spot behind Felix Hernandez, who will pitch the series opener in Houston Friday. Hernandez’s regularly scheduled start was pushed back a day due to the rainout in New York Wednesday.

Iwakuma will help bolster a rotation still missing Taijuan Walker, James Paxton and Blake Beavan, all on the disabled list.