The University of Washington will salute former softball pitcher Danielle Lawrie Saturday by retiring her jersey, making her the first in program history so honored. 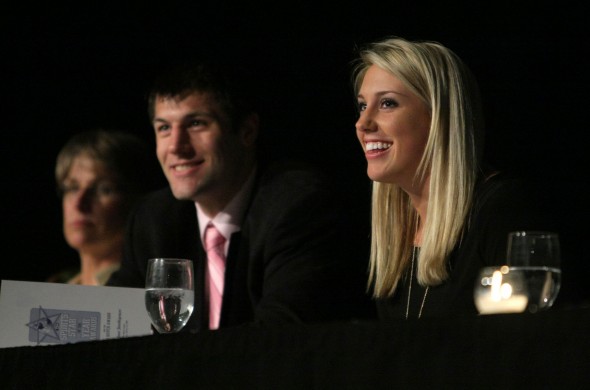 In the more than 125 years that University of Washington athletes have run, jumped, tackled, dunked, rowed, pole vaulted and wrestled, the school has seen fit to retire only a handful of jerseys. That makes Saturday’s 6:45 p.m. ceremony at Husky Softball Stadium, where Danielle Lawrie’s No. 15 will be “raftered” forever, not only rare, but a richly deserved accolade.

Lawrie, who pitched for UW from 2006-10, will not only become the first softball player in program history so honored, she also might be the last — if her career accomplishments are to be used as the required standard for jersey retirements. 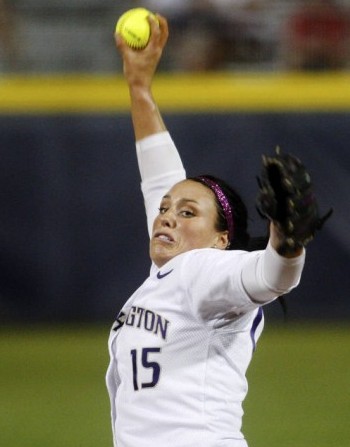 Danielle Lawrie won 136 games during her UW softball career and struck out 1,860 batters. / University of Washington

No UW athlete — not Hugh McElhenny, Steve Emtman, Bob Houbregs nor Brandon Roy — dominated their sports the way that Lawrie dominated hers. Even acknowledging that a softball pitcher has greater influence in that sport than an individual athlete has in any other team sport, what Lawrie did was phenomenal.

She compiled a 136-42 record and 1,860 strikeouts, most in UW history and fourth most in NCAA history. She twice was named USA Softball’s Collegiate Player of the Year and twice won the Honda award as the nation’s best softball player.

She led the Huskies to back-to-back appearances in the Women’s College World Series and to the 2009 CWS championship, a tournament in which she was named Most Valuable Player. Lawrie also threw eight no-hitters, including four perfect games. In her final two seasons at Washington, Lawrie compiled a record of 82-13. Among her other notable career highlights:

“Danielle holds many records and earned three handfuls of awards as a player,” head coach Heather Tarr said. “But what impresses me more than any single award was her ability to lead her team and find a way to win with a group of people on a very consistent basis. It was never about her. It was about our team.”

But the jersey retirement is all about Lawrie and the listed accomplishments only begin to suggest why the school will honor her prior No. 11 Washington’s game against No. 9 Arizona (7:05 p.m., first pitch) Saturday at Husky Softball Stadium.

As a freshman in 2006, Lawrie won 23 and held opponents to a .186 batting average while recording 20 double-digit strikeout performances, including two games (vs. UCLA and Arizona State) with 19 strikeouts.

In 2007, Lawrie had 25 double-digit strikeout efforts, a no-hitter and six one-hitters. She fanned 15 or more in a game seven times while allowing opponents a .176 batting average.

After sitting out 2008 while she trained for the Beijing Olympics, Lawrie returned in 2009 and set a UW record with 42 wins, which included 21 shutouts, 13 against ranked teams. After opening the College World Series by throwing a no-hitter against DePaul, she led the Huskies to their first NCAA championship and was named MVP of the tournament.

While the Huskies didn’t repeat in 2010, Lawrie posted a 40-5 record with a 1.11 ERA. She threw four no-hitters, including three perfect games, and recorded double digits in strikeouts 27 times. She also led the Huskies with 15 home runs and a slugging percentage of .609.

“Retiring a jersey is among the highest honors we can bestow on a former student-athlete,” said athletic director Scott Woodward. “Danielle has done so much for this university, and this tribute to her efforts will memorialize her forever.”

Based on Lawrie’s deeds, Washington will probably have to significantly lower the bar if it wants to retire another softball player’s jersey.