Nine to ponder: Which one would you draft?

The Seahawks likely will address needs on their offensive and defensive lines and at the wide receiver position. We offer nine choices. Whom should they draft? Vote here. 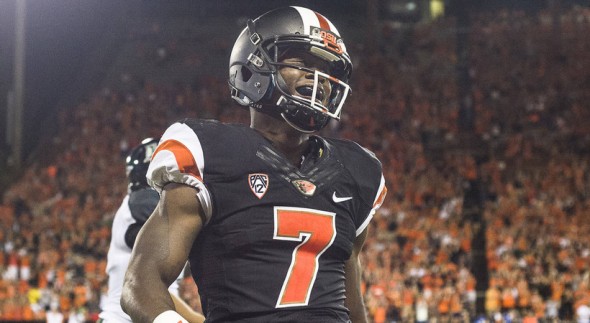 Oregon State’s Brandin Cooks has the skill set to replace Golden Tate, and might interest the Seahawks in the first round of the NFL draft Thursday. / Oregon State University

Assuming they do not trade their first-round draft choice – if they do, down is more likely than up – the Seahawks will select 32nd overall Thursday, the slot assigned to the defending Super Bowl champion. Further assuming the Seahawks are going to address areas of need, they will probably look first to replenish their offensive and defensive lines and the wide receiver position, all hit hard during free agency.

Or, the Seahawks could cross everyone up and make a “who’s he?” pick as they did twice two years ago when DE/LB Bruce Irvin surprisingly came aboard in the first round and Russell Wilson followed in the third, just weeks after the Seahawks had supposedly signed their franchise quarterback of the future, free agent Matt Flynn. 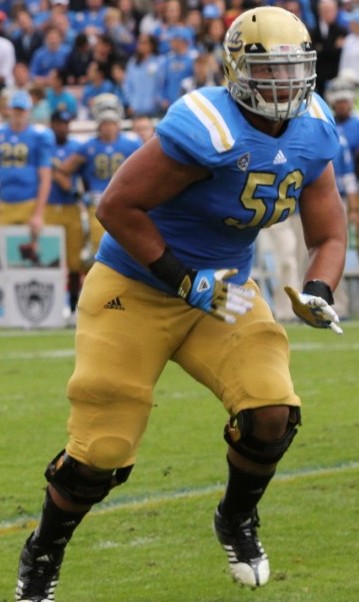 Xavier Su’a-Filo of UCLA is primarily a guard, but has the ability play tackle in the NFL. / Wiki Commons

Mock drafts are not much help in trying to get a handle on which way the Seahawks might be leaning. If they were, mocksters would have no need to crank out versions 1.0, 2.0, 3.0, 4.0 and 5.0 following every workout, Pro Day and rumor.

While pecking orders change in every mock – various versions have Louisville quarterback Teddy Bridgewater rated everywhere from No. 1 overall to out of the first round entirely – there is consensus this year about which players belong in the top half, perhaps the top two-thirds.

In addition to its blizzard of mock drafts over the past few months, SI.com recently published a list of its top 64 prospects in order of value, not team need, in the first two rounds. Using SI.com’s “Big Board” as a guide, and narrowing it down based on the web site’s rankings, we have assembled a list of nine players – three receivers, three offensive linemen, three defensive linemen – that we think could fill a Seahawks need, depending on availability.

As the least predictable team in the NFL, the Seahawks may skip our list and choose an octopus from the bottom of Puget Sound. But imagine picking one from our list, telling your friends beforehand, nailing it and Friday morning be the smartest person in your office, shop or class.

Who would you take in the first round?

If you don’t like these nine and can make a better, or more likely, case for another candidate, let us know in the comments section. To become better informed on the draft’s top players, use this link: http://nfl.si.com/2014/04/03/2014-nfl-draft-top-64-prospects/

If Percy Harvin can stay healthy, he and Cooks would present, from a speed perspective, an almost impossible tandem to defend. If Harvin can’t, Cooks has the tools to assume Harvin’s role. The 2013 Biletnikoff Award winner, Cooks led the NCAA with 1,730 receiving yards on 128 catches with 16 touchdowns. Cooks has 4.3 speed and remarkable agility. The case against him: He’s 5-foot-10, the Seahawks already have two relatively short receivers in Harvin (5-foot-11) and Doug Baldwin (5-foot-10), and Pete Carroll would probably love to acquire a larger target.

David Yankey of Stanford,  6-foot-6 and 315 pounds, could be the upgrade the Seahawks are looking for at guard. / Wiki Commons

Amaro made AP All-America and All-Big 12 first teams last season after catching 106 passes for 1,352 yards and seven touchdowns. As SI.com reported, “College defenses had next to no success attempting to cover him, as he essentially was used as a 6-foot-5, 265-pound slot receiver.” Although listed as a tight end, Amaro is essentially an oversized wide receiver. While scouts agree that he’s not the second coming of Vernon Davis, they do believe he could be a reliable long-term starter.

Benjamin ranked ninth in the ACC in catches (54) and seventh in receiving yards (1,011), but first in touchdowns (15), three more than Clemson’s Sammy Watkins, a consensus top-five pick. Carroll loves large targets and Benjamin is huge, 6-foot-5 and 240 pounds. Blessed with impressive speed for his size and great leaping ability, he is the optimum red-zone target, capable of fixing a shortcoming during Carroll’s tenure. The rap: Benjamin drops too many passes.

A hulker at 6-foot-6 and 315 pounds, Moses is physically suited to play right tackle, a position where the Seahawks took a hit in free agency when Breno Giacomini departed. Moses had an impressive Senior Bowl, and is considered capable of starting at multiple spots on the offensive line as a rookie (although not at center). While his versatility is an asset, he is much farther along as a pass protector than as a run blocker. That’s a plus, considering the 44 sacks the highly mobile Russell Wilson suffered last season, but a negative because the Seahawks like to grind out wins on the ground. If the Seahawks opt for Moses, he would be the second player from West Virginia (Bruce Irvin, 2012) taken by Seattle in the first round.

Su’a-Filo started all 40 games he played at UCLA and wound up as a two-time All-Pac-12 selection and second-team Associated Press All-America. He’s 6-foot-4 and 307 pounds and ran a 5.04 40 at the combine, second-best among offensive linemen. Primarily a guard, Su’a-Filo can also play some tackle. Noted SI.com: “He protects the quarterback well, with the athleticism to be an absolute force in the run game. An offense that asks its guards to operate in space would have a hard time finding a better fit than Su’a-Filo.”

With Wilson pressured on more than 40 percent of his throws last year, and Marshawn Lynch often overwhelmed as soon as he touched the ball, the Seahawks need to take the guard position more seriously. Yankey might be the best fit. He’s 6-foot-6 and 315 pounds, and wins physical battles. Said SI.com: “There’s not one thing he does at a blow-away level, but he does everything — from big to little — to a very high standard. And at his position, that’s more than good enough.”

At 6-foot-6 and 310 pounds, Hageman has the physical prowess and skill set to play tackle or end. Hageman recorded 13 tackles for loss last season and batted down eight passes at the line of scrimmage. A converted tight end with a basketball background, Hageman could help fill a role vacated by Chris Clemons, cut by the Seahawks in a salary-cap move. Warns NFL.com: “Has a glaring bust factor.”

Jernigan became a force last season, registering 35 solo tackles, 11 tackles for loss and 4.5 sacks. He starred in the Seminoles’ BCS national championship win over Auburn with nine total tackles. His strength is interior run defense, making him a candidate to replace Red Bryant.

The Seahawks suffered multiple free-agent losses on the defensive line (Clemons, Bryant, Clint McDonald) and Tuitt is a player who can pressure the quarterback, given his ability to drive blockers into the pocket. He had 12 sacks in 2013, second-most all-time by an Irish player. Tuitt did not have as good a season in 2013 as he did in 2012, largely due to an off-season sports-hernia injury. Says SI.com: “He could be the steal of the draft.”