After signing his stupendous contract extension, Sherman promises to be the same “ragged dog” he’s always been. But he’s the respected top dog now. Different view. 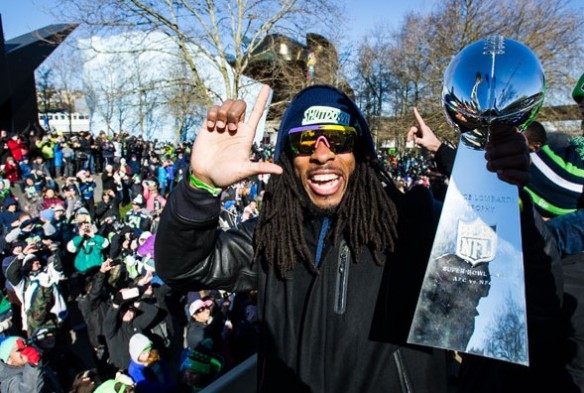 Richard Sherman has a new view of the world — on top. / Seattle Seahawks

Now it begins to get harder. No, not the draft Thursday. That’s where the Seahawks are strong.

The tough pull is maintaining the emotional edge to win another championship. In making CB Richard Sherman and FS Earl Thomas the most highly paid players at their positions in NFL history, the Seahawks at once did what had to be done, yet made potentially different players of both.

Pete Carroll agrees with generations of successful coaches who know that as hard as it is to win a pro sports team championship, it’s harder to repeat, or even to maintain contention, especially in the parity-drunk NFL.

Naturally, Sherman, who signed his stupendous contract extension Wednesday – four years, $57.4 million total value, $40 million guaranteed – will have none of the talk of becoming a different player. Just as naturally, Mr. Loquacious had an analogy that covered as much ground as he typically does on third-and-seven.

“That mentality isn’t something that I can change, I don’t think. Even I wanted to, I can’t do it. It’s not a switch that I have. I’ve always been in this mentality so I don’t know anything else. This is how I’m going to be until I hang the cleats up . . . Money didn’t motivate me before; it’s not going to motivate me now. It’s a drive to be great, it’s a drive to win, it’s a drive to want to make it to the Hall of Fame.”

Sherman is a good candidate to keep his edge, maybe second only to the maniacal Thomas, who last week was rewarded with his extension – four years, $40 million, $25.7 million guaranteed. The Seahawks are methodically executing their “model,” as GM John Schneider likes to say, of giving great reward to great players.

But if Sherman really ever owned a ragged mutt, he would know that proper care and feeding often can do wonders for canine disposition. Takes awhile, and may not always work, but often, as with human nature, a warm hearth tends tends to cool the fire for chasing squirrels.

True, he was 29 and not 26 like Sherman, and he played running back, an NFL position with a notoriously quick expiration date. But after his 1,880 yards rushing in 2005, his 2006 contract extension bought the Seahawks 1,612 yards over the next two seasons total, plus a penchant for going down quietly after first contact.

But Alexander was a pedigreed first-rounder out of Alabama, not a fifth-round mutt from Stanford, like Sherman. Or at least, that’s how he sees himself — a no-account, snubbed in the 2011 draft in a way he is determined to never forget, even after the reality of being accorded the ultimate respect: A $14 million-a-year player.

Here’s how he remembered the three days of the 2011 draft:

“I remember being angrier and angrier every day. Just sitting there (at home).  I didn’t expect to get picked round one. I mean, nobody was talking about me . . . you have several teams telling you that (they) expect to pick (you).

“You feel like, ‘OK, is every team just lying?’ It takes a long time to get from day two to day three, longer than anything that anyone would ever experience. You sit by your phone for literally hours and hours and hours and hours at a time, waiting for some kind of message . . .  the fourth round passes and you’re like, ‘Damn. I might not get picked.’ That’s when it starts going downhill. That’s when you start thinking, ‘Is this it for football?’ Then in the fifth round, you get a call and Seattle makes the best decision they could make.”

As a smiling Schneider put it sarcastically at the beginning of the press conference, “The thing we struggle with (Sherman) is his confidence. We’re always trying to pump him up.”

What Sherman didn’t know then, and what most draftees this weekend won’t know, is the talent disparities aren’t as great as the media microscope creates. The attention accorded the first round is fun, but at least with the Seahawks, it matters far less.

That’s a big reason why no one who follows closely the Seahawks would be surprised if the Seahawks trade out of the 32nd and last pick of the first round to move down in exchange for extra choices. As Sherman’s teammates such as Doug Baldwin, Jermaine Kearse, Malcolm Smith, J.R. Sweezy and Michael Bowie have established, there’s many more players who can play in the NFL than there are high draft selections.

“I think it’s probably smaller than people would think,” Carroll said Tuesday of the difference between high and low picks. “We’ve seen so many of our guys, fifth- and sixth- round kids, that started for us early.  It’s a hard science to deal with. It’s so close, and factors that maybe you couldn’t quite uncover, show up in those guys (who) play just as good as a guy drafted in the first round.”

The main difference between high and low, of course, is money, and its absence, which provides much of the emotional fuel for the overlooked.

Sherman no longer has that as his fuel. He says it never mattered to him, and that may be true. But the ragged dog has never before been top dog.