Behind early again, the Sounders score in the 88th minute, Obafemi Martins to Kenny Cooper, to run win streak to five. It was the seventh goal this season after the 75th minute. 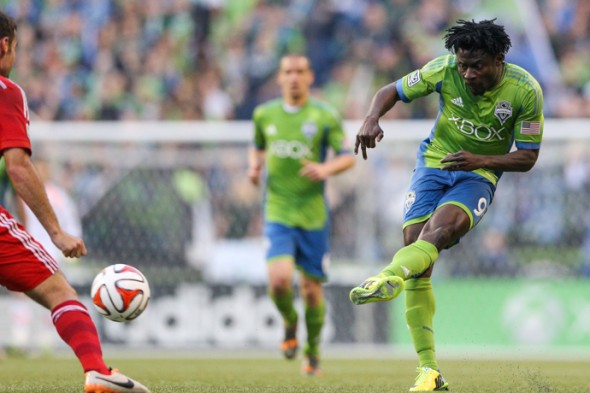 Obafemi Martins assisted on both goals in the Sounders’ 2-1 win over Dallas Wednesday night at the Clink. / Drew McKenzie, Sportspress Northwest

A second splendid assist from Obafemi Martins, this one in the 88th minute to Kenny Cooper, a late substitute, gave the Sounders another dramatic come-from-behind win, 2-1, over FC Dallas Wednesday night at the Clink.

The fifth win in a row for Seattle (7-2-1), and the fifth time in the past six the Sounders have rallied from a deficit, gave them a five-point lead over Real Salt Lake in the MLS Western Conference. They matched their franchise record for best start after 10 matches.

Martins drove hard through the far side of area and slid a perfect service to Cooper, who entered the game two minutes earlier for Lamar Neagle. Cooper punched in an easy score from point blank range against his former team. The goal was the league-leading seventh for the Sounders in the 75th minute or later.

“He put it on a platter for me,” Cooper told Root Sports. “There’s so much belief here that we’re always in the game. I think the fans feel it, and we feed each off each other.”

In the clubs’ first meeting April 12 in Dallas, the Sounders came from behind twice, winning 3-2 when Dallas was 4-0-1. They are 1-4 since, and the Sounders are 7-1-1 in their last nine against Dallas.

Seattle’s comeback Wednesday began in the 61st minute when Blas Perez was dispossessed, followed by three sharp passes that pushed the ball to Martins, whose cross was perfectly positioned for Neagle, charging goalward. The score was Neagle’s third in four games and came on his 27th birthday. Martins leads MLS with six assists.

“That’s his unselfish play for the team,” coach Sigi Schmid said of Martins.  “He’ll run the channels, he’ll post up when he needs to post up, he’ll drop off and find the ball. He will chase and battle and fight for the ball.

“He has just been a great teammate this year and this is something good . . . If we can get him on the ball and if we can get Dempsey on the ball in the final 20 yards of the field, it’s problems for the opponent.”

Again, the Sounders started in a hole, and for a second game in a row, it was Brad Evans’ responsibility, albeit from a dubious officiating call. A retreating Evans, starting his first game at left back, had his feet tangle with Perez in the area, prompting a yellow card and a penalty kick. Dallas’s Michel scored easily.

Clint Dempsey came off the field in the 92nd minute seeming to touch the back of his left leg as if there was an injury.

Seattle is 4-1-0 this when conceding the first goal, winning the last four. The Sounders lead the league with 15 second-half goals and 22 overall. They have scored a game-winner in the last 15 minutes in each of their past five.