An exciting first round elsewhere in the NFL was drama-free in Seattle, as the Seahawks traded out of the first round to add to their stash for Friday and Saturday. 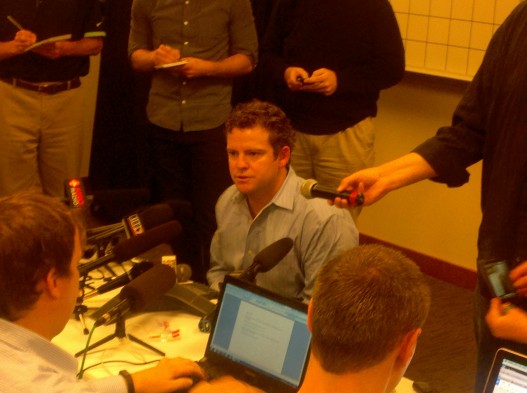 GM John Schneider met the media Thursday night after the Seahawks had a player-free first round. / Art Thiel, Sportspress Northwest

For the Seahawks, the first day of the NFL draft Thursday was sound and fury signifying almost nothing. The Seahawks broke their pattern: They did what was expected.

The Super Bowl champs traded down into the second round, giving up the last pick in the first round, No. 32, to Minnesota for the Vikings’ second-round pick (N0. 40) and a fourth rounder (108th).

The Seahawks’ initial pick in the draft won’t happen until after the 4 p.m. Friday start to the second round, when they also have the 64th pick. After the third round Friday, the final four rounds will be Saturday.

“That’s exactly what we were hoping for,” GM John Schneider said. “We were talking to a number of teams down there at the end. Minnesota stayed with it.”

Basically, they gave away eight spots in the draft in order to gain a fourth-round pick, signaling again that the draft is deep and the Seahawks are patient.  Nothing that happened the first round apparently changed the Seahawks’ big board.

“The board won’t change,” he said, smiling. “If the board changes, one of the (office)  cleaners did it.”

If a temptation was strong to take a player at 32, Schneider didn’t give it away.

“We have a number of players that were suitable for this pick,” he said, “that we feel would be suitable at 40 as well. There are several guys we hope will be there tomorrow. But if somebody comes tomorrow with something that we can’t turn down, we’ll look at that as well.”

The deal was helped by a good relationship with the Vikings’ front office.

“We have a great relationship with those guys,” he said. “They’re challenging Detroit, I guess.”

The Vikings, who took UCLA LB Anthony Barr with the ninth pick in the first round, used the Seahawks’ pick on Louisville quarterback Teddy Bridgewater.

The draft-day trade is something of a tradition under Schneider and Carroll. In their first year of 2010, they made 12 draft-day trades, and wound up with nine picks.  In 2011, they made two deals  (had nine picks), three in 2012 (10 picks), and three in 2013 (11 picks), including the deal with Minnesota that brought WR Percy Harvin in exchange for a first and seventh round picks in 2013 and a third in 2014.

The Seahawks have seven picks over the final six rounds.

The lone player from a state of Washington school was the Cougars’ Deone Bucannon, a first-team All-America strong safety taken with the 27th pick by Seattle’s division rival, the Arizona Cardinals. Most mock drafts had Bucannon as a second-round pick.

Bucannon (6-1, 211 pounds) was the first Cougar taken in the first round since cornerback Marcus Trufant was the No. 11 overall selection in the 2003 draft by the Seahawks. Bucannon is the first WSU defensive back drafted since safety Eric Frampton was taken in the fifth round by the Oakland Raiders in 2007.

Said Cardinals coach Bruce Arians of Bucannon: “We’ll give him opportunities to knock the crap out of people.”