If the idea is to bunch the britches of NFL defensive coordinators, consider the pucker underway. The drafting of Paul Richardson will occasionally pair the rookie with veteran WR Percy Harvin, giving the Seahawks two F-18s on the flanks. The … 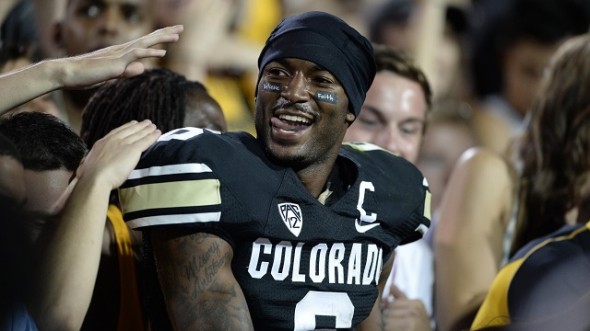 If the idea is to bunch the britches of NFL defensive coordinators, consider the pucker underway.

The drafting of Paul Richardson will occasionally pair the rookie with veteran WR Percy Harvin, giving the Seahawks two F-18s on the flanks. The air defense has yet to be devised to divert, catch or otherwise annoy such speed.

Some think Harvin might be the fastest man in the NFL, although his listed 4.41-second speed in the 40-yard dash would leave him choking on the rubberized NFL dust of Richardson, who said he clocked a 4.28 Jan. 3 at a scouting workout. At the NFL combine in February, he ran a leisurely 4.33, which suggests he must have left the doors open.

“I wanted it to be faster,” he said, voice trailing off on the teleconference Friday evening at Seahawks headquarters in Renton, where none of the assembled reporters penciled the name Richardson into any of thousands of mock drafts.

Again, the Seahawks made a high draft choice that no one saw coming. And in this case, may barely see the pick as he blows by.

“We’re kind of about guys with special traits,” said Matt Berry, the Seahawks’ southwest area scout who bird-dogged Richardson. “He’s a guy who had something different, something exceptional. I think that’s what drew us to him.”

They were drawn to him from the start of the draft, but were confident that he would pass through the first round because of higher-profile players. So Thursday, they traded out of the last pick of the first round, at 32, to No. 40 in the second.

The Seahawks ratcheted up the pressure Friday by trading again, this time with Detroit, switching from 40 to 45 and gathering picks in later rounds. But soon, a rival talent sleuth likely would recall Richardson’s 40 time and speak up.

Richardson has more of what the sports world saw at the Super Bowl — speed an order of magnitude greater than anywhere else in the NFL. The Seahawks crave it, even if it comes in a six-foot, 183-pound packages.

“We like big receivers, we really do,” said Pete Carroll, “but big guys that are fast enough are hard to find. And fast guys sometimes aren’t big enough.”

Even though there are rarely secrets anymore in talent scouting, some guys are more on the margins, even at 4.33. Richardson was for three years at the Pac-12 Conference’s worst program, Colorado, which improved to 4-8 season (1-8 in conference). He led the Buffs in receptions (83), receiving yards (1.343) and receiving touchdowns, good enough to be first-team All-Pac-12. He was first receiver in conference history to have back-to-back 200-yard games.

But he also missed the 2012 season recovering from a torn ACL, and came to Boulder under a cloud.

Out of Los Alamitos High School in Los Angeles, he accepted a scholarship to UCLA, where in his freshman season was arrested in felony purse-snatching episode that ensnared two teammates, Josh Shirley and Shaquille Richardson, Paul’s cousin.

Charges were eventually reduced, but all three transferred out — Shirley to Washington, Shaquille to Arizona and Paul to Colorado. Not a smart way to gain profile. But for the Seahawks, the shadows helped.

“He was quiet,” Schneider said, explaining why he was confident Richardson would be around at the 45th pick. It helped that at the scouting combine, Schneider and Carroll did not interview him — a tell-tale to scouts who are watching to whom the Super Bowl champs speak. The Seahawks’ team psychologist paid him a visit, as did Berry, but it was nothing unusual.

“I figured it out when the general manager called me,” Richardson said from his parents’ home in Los Angeles. “I was pretty much on the fence about everything, just letting everything happen.

“I’m so appreciative right now. I’m still excited. It hit me, but it hasn’t hit me. I’m just overwhelmed right now, in a good way.”

Carroll knew of Richardson when he was coaching at USC, and made a scholarship offer after his sophomore season, which helped his Seattle chances. Most pre-draft explainers had Richardson in the third round or later.

“I really think he’s the guy with the best quickness in and out of the breaks and the explosive downfield (strike),” Carroll said. “He’s an exciting guy to bring to camp to add to our team and I think the guys will take to him.”

His knee back to health — “My knee hasn’t been an issue since I got my brace off,” Richardson said — the only other question was a slim build. He played most of his college career at 160 pounds. But Carroll dismissed it.

“How big is Doug (Baldwin)? How big is Percy? He’s just like our guys,” he said. “I know there is some concern about that but we love the way our guys play.”

An All-SEC pick at Missouri under coach Gary Pinkel, the former Washington assistant, Britt caught the eye of Cable during his matchups against South Carolina Jadeveon Clowney, the draft’s No. 1 pick.

“He didn’t worry about it — he was very physical with him.”

His words and deeds make him seem like a version of Steve Hutchinson, the brutal guard who let the Seahawks to their first Super Bowl appearance in 2005.

“I went into the season last season wanting the guys I went against to remember me,” Britt said by teleconference. “It was my last year so I wanted to leave a mark in their mind and have them remember me. If nasty is the word you want to use, then I’m nasty.”

The Seahawks are back at the draft at 9 a.m. Saturday with the final four rounds. After having two picks in the second round but none in the first or third, the Seahawks have the following:

Coach Pete Carroll confirmed that LT Russell Okung did have surgery on his left foot. He wasn’t specific, but Okung missed eight games with a ligament tear in his left big toe, and played through the pain the rest of the season.

Carroll said he anticipates Okung being ready for training camp in late July, but could be limited early.