Seahawks in fourth round: DE, WR and LB 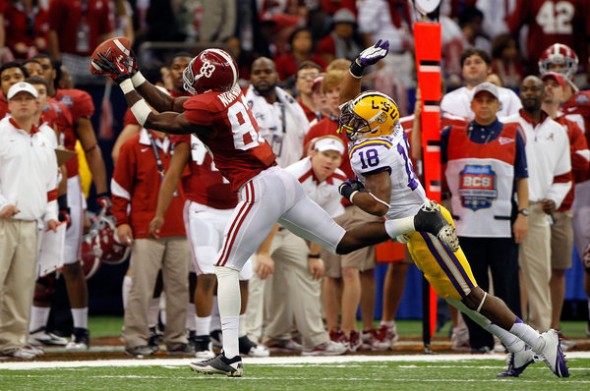 Kevin Norwood was an accomplished student as well as a wide receiver at Alabama. / Alabama athletics

The Seahawks had three picks in the fourth round of Saturday’s final day of the NFL draft, taking with pick No. 108 UCLA DE Cassius March, with pick No. 123 Alabama WR Kevin Norwood and with pick No. 132 Boston College outside linebacker Kevin Pierre-Louis. Here’s a quick look at each from CBSSports.com:

Weaknesses: Snap anticipation can be a problem. He jumped offsides on consecutive snaps in a key situation against Cal in 2013. A frustrated Marsh was then ejected for throwing a punch.

A versatile defensive lineman, Marsh lined up inside and outside for the UCLA defensive front. At 6-4 and 265 pounds, he has a little bit of a tweener skillset. Playing opposite future top-10 pick Anthony Barr, he has flashed next-level skills. Consistency has been an issue, as well as strength — only 16 reps at 225 pounds at the combine.

Strengths: Flexible body type with adequate height and hand size. Good speed for the position with sharp footwork and leverage in his routes. Quick starter with short-area burst. Smooth body control and excellent mid-air adjustments to twist and look the ball into his hands. Very good concentration and a natural hands-catcher.

Nice awareness to locate, working back to the ball and aggressively attacking it. Never quits on his quarterback. Smart with an alert sideline sense. Knows where the sticks are. Good football character and known as a reliable option on and off the field. Positive attitude and carries himself like a professional. Already has his master’s degree.

Weaknesses: Lanky build and average-at-best muscle tone. Needs to get stronger and dedicate himself to the weight room. Tends to play too high and struggles vs. press and physical defenders at the start and peak of routes. Lacks great start/stop explosion and not very creative as a ballcarrier.

Much improved blocker, but still has room to grow in this area. Needs to improve his ball security and be a better finisher. Older prospect and will be a 25-year-old NFL rookie. Below average career production at a school with a talented quarterback and average receivers. Only one career 100-yard receiving game and never led the Tide in receiving.

A three-star WR recruit, Norwood chose Alabama over Mississippi and Southern Mississippi and redshirted in 2009. He was a back-up as a freshman and sophomore, only seeing the field due to a few injuries. With Marquis Maze and Darius Hanks leaving for the NFL, Norwood became a starter as a junior in 2012 and posted consistent production his final two seasons, leading the Tide with seven receiving scores in 2013. He needs to get stronger to better beat press coverage and hold up vs. physical defenders, but he is a mature route runner with excellent hand/eye coordination and reflexes at the catch point.

Norwood isn’t a speed demon, but he accelerates well with natural body control. He isn’t elite in any one area, but solid across the board. He was somewhat overlooked and underutilized at Alabama, but could end up having a better pro than college career.

Strengths: Athletic movement skills and stays light on his feet. Fluid in his drops with smooth body control. Smart and instinctive with excellent read/react quickness with an explosive first step.

Very active and always around the ball with terrific anticipation. Good eye use to avoid blocks in space while tacking the ballcarrier.

Reliable tackler and stays controlled through the process to finish. Strikes through his target. Aggressively takes on blocks and plays the game as if he were bigger and stronger than he is. Sound ball skills.

Versatile experience, even making impact plays on special teams. Very high football and off-field character with a productive resume as a four-year starter.

Weaknesses: Looks more like a safety with his marginal size and slight body type. Limited strength and growth potential to add much more bulk.

Too easily eliminated by blockers, lacking the power to quickly shed. Flows with the action and loses back-side contain or gets lost in the traffic, struggling to keep himself clean in a crowd. Plays too high and needs to show better bend and pad level to improve his base and technique as a tackler.

Would like to see more of a sense of urgency on every snap. Strong durability concerns with his lack of size and needs to stay healthy for a full season. Missed a handful of games the past few seasons due to injury.