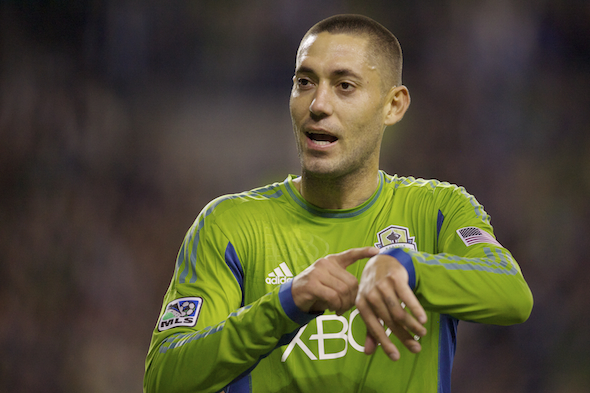 As expected, three Sounders are among 30 American players called by coach Jurgen Klinsmann to the U.S. Men’s Team training camp, the final one before a 23-man team is selected for the FIFA World Cup that begins June 16 in Brazil.

Forward Clint Dempsey, midfielder Brad Evans and defender DeAndre Yedlin will be on hand Wednesday at the Stanford campus in Palo Alto. Final selection is June 2.

Among those not invited was Eddie Johnson, the Sounders’ leading scorer last season who plays for D.C. United and helped the U.S. qualify for the Cup. Johnson scored 23 goals in the past two seasons in Seattle but has yet to score for D.C. United.

He had a big role for USMNT while a Sounder, scoring two goals against Antigua to help get the U.S. to the CONCACAF World Cup qualifying hexagonal, then two more during the hex, including the go-ahead goal in a 2-0 win over Mexico in September.

“We had some difficult decisions to make, and we are very excited about the 30 players coming into camp,” Klinsmann said in a statement. “There is competition in every position, and these next couple of weeks will allow us to make the final determinations on the best 23-man unit to represent the United States in the World Cup.”

The U.S. camp concludes with a match against Azerbaijan May 27 at Candlestick Park. Camp shifts to the New York area, where the U.S. will host Turkey June 1 at Red Bull Arena in Harrison, N.J. The final friendly before departing for Brazil is June 7 at EverBank Stadium in Jacksonville, FL., against fellow World Cup participant Nigeria.

In Brazil, the U.S. is slated to play Belgium in a closed-door scrimmage June 12, the day of the World Cup opener, before commencing Group G play against Ghana June 16.

Team captain Dempsey is, short of serious injury, a guaranteed selection. He has 103 caps, tied for 10th in U.S. history, and ranks second all-time with 36 goals. He leads MLS with eight goals in nine appearances, and has played a full 90 minutes in both appearances for USMNT in 2014.

Evans has 17 caps and one goal. He participated in the team’s January camp and played 73 minutes in the 2-0 win against Korea Feb. 1. Evans started at right back in eight of the last nine games for which he was available, including five World Cup qualifiers.

At 20, Yedlin, from Seattle’s O’Dea High School, is perhaps a long shot to make the final roster. He participated in USMNT’s January camp and earned his first two caps this year in friendlies against Korea and Mexico, playing 36 minutes total as a second-half substitute. Yedlin also participated in the 2013 U.S. U-20 World Cup and started all three matches.

If he does make the final roster, he won’t be the youngest. That distinction belongs to Julian Green, 18, Bayern Munich’s German-American dual-citizenshup dynamo who injured his shoulder in his U.S. debut against Mexico and hasn’t played since.

Half of the 30 players are supplied by MLS teams, up from four in the 2010 Cup and a mark of the improved play (and pay) in the American league.

The Sounders are the only MLS team sending three players, while Kansas City, Los Angeles, San Jose and Real Salt Lake have two, and Houston, Columbus and Toronto and Philadelphia one.

The three Sounders will miss at least three games while at camp: Saturday against San Jose, May 24 at Vancouver and May 31 against Real Salt Lake. Those who make the team likely will miss the June 7 game against Chicago before MLS goes on a three-week hiatus for the World Cup.