Sterling’s self-takedown brought to us by Stern

He’s been suspended for life, so now the NBA has lost any control it might have had over Clippers owner Donald Sterling. Wonder what he might say next? 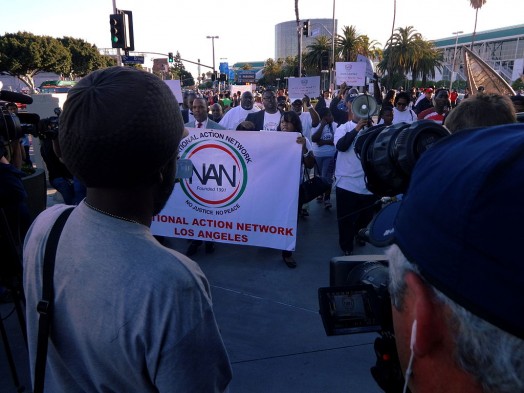 The legacy of Donald Sterling — and David Stern — was seen outside Staples Center in Los Angeles. / Wiki Commons

As he is wont to do, comedian Jon Stewart struck to the heart the matter regarding my new favorite person, Clippers owner Donald Sterling; favorite because, well, how can you not feel better about yourself and most everyone you know compared to him?

Stewart’s best point Monday night was that it no longer matters about TMZ, V. Stiviano, secret recordings and what anyone else says about Sterling. In his CNN interview, which, presuming he understood that with the lights, cameras and the under-prepared Anderson Cooper, was being recorded for the Earth’s 7.2 billion people, he established on his own, without a stunt double, that he was an execrable human being.

“Let the crazy fly,” Stewart said. That was a point I offered in a recent column about Sterling that suggested we are better served by having clueless bigots such as Sterling in the light, rather than running them out of our collective consciousness to the margins, where vileness festers in the shadows.

But running him out was what happened. And it didn’t work very well. The awkwardness for the NBA is now immense.

You may recall that Commissioner Adam Silver responded relatively swiftly to pressure from players, media and a public outraged by Sterling’s illegally recorded and published remarks by suspending him for life. Silver also promised to rip the team from Sterling’s control.

For that decision, somehow Silver was hailed as courageous, when in fact it was his only course of action to stave off a player boycott of that evening’s game between the Clippers and the Warriors. But Silver also lost something in the decision: Control.

Silver unloaded all his ordnance at once, but left Sterling alive.

In making a monumental fool of himself on CNN, Sterling had nothing to lose by savaging Magic Johnson again, generalizing wildly about his views of traits of Jews and blacks, and putting the lie to his claim that he merely made a “mistake,” because his broader ignorance unveiled on CNN confirmed the conclusions drawn from the recording.

For the umpteenth time in the history of politicians, jocks and celebrities behaving badly, let’s make the point again with this episode:

Adding two and two and getting five is a mistake. A lifetime of denigrating individuals and races is a choice.

That’s what Cooper should have said to Sterling. Virtually every person who has a working knowledge of Sterling’s tenure as Clippers owner that began in 1981, which includes me, has had the same reaction: Not surprised, except for the fact that it took this long to become exposed.

Paul Silas, a member of the Sonics’ 1979 championship team, began his coaching career when the Clippers were in San Diego, becoming Sterling’s first head coach. He lasted two seasons before being fired and couldn’t wait to get away. Upon his various returns to Seattle when he greeted old friends, he often would offer up a Sterling anecdote whenever the conversation reached a can-you-top-this moment about bizarre happenings in the NBA.

What the world saw from Sterling this week wasn’t caused from age, dementia or over-medication. It was vintage Sterling, the same guy who was already an owner when David Stern moved from the NBA’s lead counsel to commissioner in 1984. It’s the same guy to whom Stern provided Chris Paul when Stern nixed a December 2011 trade of the star point guard to the Lakers from New Orleans, when the franchise was temporarily an owner-less ward of the NBA state. Instead, Stern manipulated the deal so that Paul went to the Clippers.

Stern’s decision outraged Lakers fans, and as this si.com story points out, infuriated the entire league, because forcing Paul to the Clippers validated Sterling’s tenure, which, up until the trade, included losing records in 31 of the previous 32 years.

Stern bailed out the NBA’s longest-tenured owner from his own idiocy, and now the Clippers are in the second round, tied with Oklahoma City 2-2 heading into game 5 Tuesday night.

The series thus stands as a touchstone in the dark legacy of Stern: A team manipulated into contention as a favor to a friend, against a team relocated for another friend, Clay Bennett, almost purely out of spite.

Stern did not run a league. He ran a plutocracy among his friends. And now one of them has run amok.

With any luck, Sterling has the phone numbers for the anchors at ABC, NBC, CBS and Fox.

I just wish someone would ask a few questions of Stern, his enabler.