Seahawks to be feted at White House next week

The tradition of White House championship recognition began in 1969, and for the first time, it will include the Seattle Seahawks. 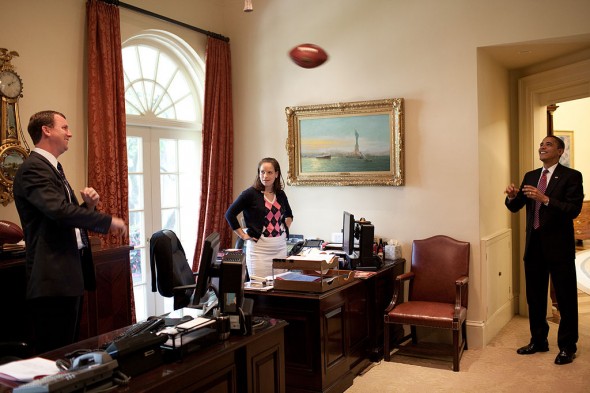 President Obama always finds time for sports, in this case, his secretary’s office. / The White House

From one pinnacle to the next — the Seahawks are going to the White House. In what has become an American tradition for major sports champions, the Super Bowl winners will be honored by President Obama Wednesday in a ceremony at the Rose Garden.

The event was no surprise after the 43-8 thrashing of the Broncos, it was a matter of when. The White House press office made the date official Wednesday afternoon, but the time is not set. The tradition began in 1969 after the New York Jets upset the Baltimore Colts.

The Seahawks, who are Super Bowl champions for the first time in their 38-year history, have a fan in the president, although he seems to be a fan of many sports teams, as would be prudent for his office.

Obama already singled out for attention Seahawks CB Richard Sherman, who attended, along with Russell Wilson, the annual White House Correspondents Dinner last week. It was held at the Hay-Adams Hotel in downtown Washington, D.C., not far from the White House.

The event annually gives the president a chance to fire back, humorously, at his media inquisitors. He took great delight in parodying Sherman’s post-NFC Championship game rant on national TV.

“Sometimes I do feel disrespected by you reporters,” the president said. “But that’s OK. Seattle Seahawks cornerback Richard Sherman is here tonight. And he gave me some great tips on how to handle it. ‘(CNN Chief Washington Correspondent) Jake Tapper, don’t you ever talk to me like that! I’m the best president in the game!’ What do you think, Richard? Was that good? A little more feeling next time?”

During the press conference for his contract extension, Sherman was asked about Obama’s impression.

“That was a real surreal experience and I really appreciate that. I didn’t know he knew I existed until before the Super Bowl. But we’ll get to see him in a few days and we’ll talk about that.”