Huskies closer Troy Rallings has already visualized what will happen this weekend when he gets in games for 5th-ranked Washington against 2nd-ranked Oregon State. 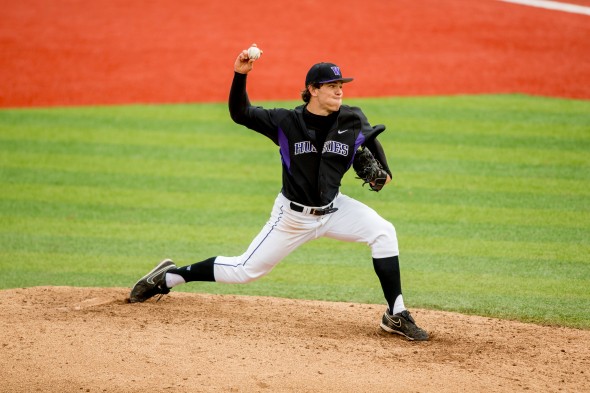 First, however, he plans to take a few deep breaths, grab his necklace, check out his tattoos, hand his necklace to a teammate and say a prayer. It’s all part of the process for Rallings since he took up daily meditation last summer.

“I’m able to relax way more than I ever have in my life,” Rallings said, smiling. “I know I’m a crazy person. Normal is boring.”

Rallings, rest assured, is anything but boring. The self-described Southern California “beach guy” showed up for an interview this week wearing shorts, a tank top and a few days’ worth of beard growing under darting green eyes. A mop of brown hair exploded in various directions atop his head.

“He’s definitely that interesting, closer personality,” Huskies starting pitcher Tyler Davis said. “I mean, he’s a crazy guy. We all love him for it.”

Mind you, teammates tend to love anyone who is 5-0 with a 1.79 earned run average and eight saves in as many chances. A hard-throwing right-hander, Rallings says the closer role fits his “ultra-competitive, no-fear” personality.

“For me, it’s the ultimate rush,” Rallings said. “It seems like every time, I’m always facing the three best hitters in the lineup.

“That’s what I want. I want to compete at the highest level when the game is on the line. That’s what fuels me.”

Rallings’ dominance out of the bullpen has been instrumental in Washington’s rise to No. 5 in Baseball America magazine’s Top 25 poll. The Huskies (37-11-1, 19-5 Pac-12) trail the second-ranked Beavers (39-8, 20-4) by one game with six games left in the Pac-12 season. Both clubs are locks to play in the NCAA tournament and may be selected as host teams for regionals in two weeks.

“We were picked to finish 10th in this conference (in the preseason coaches poll),” Rallings said. “Everyone’s always doubted us. There’s no one who’s doubted us more than Oregon State. They feel this is ‘their conference.’

Count on Rallings to lead the charge.

“He’s an amazing competitor,” Davis said. “Every time he’s out there, he’s going to do everything he possibly can to win and finish out the game.

“We love having him out there at the end of the game.”

The feeling is mutual, Rallings said.

“The moments of the highest intensity, I’m more relaxed in those chaotic situations than I am anywhere else.”

Few Pac-12 players create more chaos than Oregon State sluggers Michael Conforto and Dylan Davis. Meggs tried to recruit both players out of Redmond High School, but that was before the Huskies moved into their new $15 million ballpark. Of course, it did not aid the Huskies’ cause that the Beavers have won two College World Series in recent years, and the Huskies have never played in one.

“I hope to get to face Conforto and Davis in a one-to-nothing game,” Rallings said, “because I’ve already seen how it’s going to happen.”

Rallings, from Carlsbad, CA., was referring to his mental work with visualization. Asked how he visualizes things working out if he pitches to Conforto and Davis at crunch time, Rallings coyly declined to go into detail.

“It ends,” he said with a smile, “with the Huskies winning.”

Rallings smiles frequently these days. He said that’s a change from his youth, when he says he was “fat” and struggled to fit in as an only child (who later had a stepbrother and half-brother). He bounced between homes, cities and schools after his parents separated and eventually divorced.

“I didn’t have very many friends,” Rallings said. “I was a pretty lonely, sad, depressed dude.

“I’m a very different, crazy kid. That hasn’t always worked well with conforming with other kids, at least as a young kid.

“I was always looked at as a different kid. Over the last few years, I’ve learned to embrace who I am. I’m really proud of what I’ve become, but it’s been a long road to get here.”

The Huskies have followed a similarly long road in progressing from baseball nobodies to national powerhouse. Meggs insists that his team is “a very average group individually,” but the Huskies are beginning to land talented players like Rallings, a last-minute signee after a former UCLA teammate of Meggs tipped off the coach that UC Santa Barbara withdrew its scholarship offer to Rallings.

The move to Seattle delayed Rallings’ plan to surf more, and he says he no longer engages in mixed martial arts. He still likes to hike and paddleboard – “I don’t spend a lot of time inside watching TV” — but he loves nothing more than climbing on top of the mound to close out a baseball game.

“I grab my necklace,” Rallings says, “and I tell myself that the universe is guiding me. It allows me to have a real belief in myself, to feel like nothing is going to beat me.”

So far, so good. Rallings has helped the Huskies extend their latest winning streak to eight, but the Beavers carry a 12-game winning streak into Friday’s 4 p.m. contest.

Games also are scheduled for 4 p.m. Saturday and 3 p.m. Sunday at Oregon State’s Goss Stadium (capacity 3,248). All three contests have sold out and will be televised on the Pac-12 National network.

The Beavers have yet to announce whether All-America candidate Ben Wetzler (9-1, 0.94) will pitch this weekend. Wetzler was arrested Saturday after an alleged drunken break-in at a Corvallis residence.

“I will be very surprised if he doesn’t pitch,” Meggs said.