Steve Ballmer says if he has to own an NBA team outside Seattle, “so be it;” NHL commissioner and prospective Seattle team owners press mayor to change MOU to dump NBA. 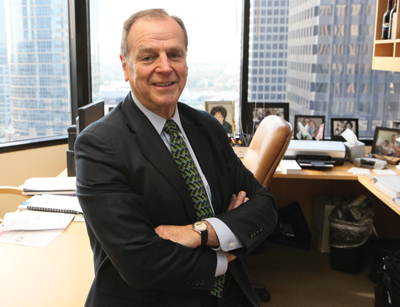 Legendary sports industrialist Alan Rothenberg may be among those interested in n NHL team in Seattle. / Rene Macura

News of separate developments Thursday suggest a changing landscape for the fates of the NHL and and NBA in Seattle.

Both officials confirmed the meeting and Murray told Daniels in an interview that the NHL was interested in an arena in Seattle, not Bellevue. The purpose of the meeting was to get the city to rewrite a document that would allow the first tenant of the proposed arena to be the NHL and not the NBA, as written. Murray said the city council is not inclined to change the memorandum of understanding.

Independent of the hockey interest was an interview Steve Ballmer gave the Wall Street Journal about his life after Microsoft. He made clear his interest in owning an NBA team, one that doesn’t have to be in Seattle.

Asked about his interest in the Clippers in Los Angeles, where he attended a playoff game and sat next to NBA Commissioner Adam Silver, Ballmer said, “I have nothing definitive to say. Am I right on top of what’s going on there? Absolutely I am.

“I love basketball, and I’d love to participate at some point in the NBA. If the opportunity is outside of Seattle, so be it. I will learn about any team that comes up for sale at this point.”

If the words are a true reflection of his attitude, the statement is a shocker for Seattle fans eager for the return of the Sonics. Ballmer has been Seattle native Chris Hansen’s partner in a controversial arena project in SoDo, as well as in an intense pursuit to buy and relocate the Kings from Sacramento, a bid that failed one year ago by a 22-8 vote of the NBA Board of Governors.

Since the vote, however, at least four developments have impacted the partnership:

*Hansen in September was fined $50,000 by California election officials after he admitted he allowed funds under his control to be spent secretly on an anti-arena campaign dedicated to stopping a publicly funded arena in Sacramento. NBA sources have said that the stunt, and its detection, put Hansen, as a prospective owner, in a poor light.

*Hansen’s chief political ally, Mayor Mike McGinn, lost his re-election bid to Murray, who has been largely non-committal on the arena. The city council, with the election of socialist Kshama Sawant, is even less inclined to support a project that its opponents label corporate welfare, even though there are no new or current tax revenues sought in the project’s financing.

*The arena project’s final environmental impact statement has been delayed until at least September, in part due to the slow provision by the Hansen camp of additional information on parking and transportation requested by the firm doing the EIS. The delay has allowed site opponents time to prepare a more comprehensive opposition. They have already labeled the draft EIS inadequate and vulnerable to litigation.

In addition, there are no teams on the NBA horizon remotely likely to be seeking relocation. The sale of the Milwaukee Bucks, the one team with an arena problem, was completed Thursday from Herb Kohl to Wesley Edens and Marc Lasry, New York-based billionaire investors, for $550 million. The new owners claim they are committed to finding a new arena solution. Ballmer, a native of Detroit, was said to have been serious in a bid for the team.

The NBA’s Silver has been clear that expansion is not a near-term priority for him. A vacancy in Seattle actually helps the NBA, because it can use Seattle’s stated desire for a return to extort lease concessions for teams from their local municipalities.

Against that backdrop, the NHL clearly sees an opportunity to be the only winter pro sport in the 13th largest U.S. market. With a new collective bargaining agreement and more lucrative TV revenue, the NHL, with 14 teams in the West and 16 in the East, is more eager to expand, which it hasn’t done since 2000.

Coleman, 52, leads a publicly traded company and, along with Glaser, are believed to be principals interested in owning an NHL team in Seattle.

Marks is the managing director of Premier Partnerships, but he reports to its chairman, a man who may be the most influential in this group — Alan Rothenberg, one of the most knowledgeable and influential figures in American sports.

He was the CEO of soccer’s successful 1994 World Cup in the U.S., as well as the 1999 Women’s World Cup. Before that, he was head of the U.S. Soccer Federation, and before that was the Lakers’ top executive when Jack Kent Cooke owned the NBA team, then was president of the Clippers from 1982-90 under Donald Sterling.

He has been an instructor in sports law at USC, and is former chairman of the American Bar Association’s committee on sports law.

Rothenberg was honored by the SportsBusiness Journal with both the “Champions in Sports Business” award for his career successes and the “Sports Industrialist of the Year” award.

There was no indication whether Rothenberg is an active participant in the deal, or just an adviser. His involvement would add serious heft.

The NHL’s annual meetings are in June, so the unprecedented visit by the commissioner to a market without a team suggests the inquiry is serious and immediate. An expansion would be, at the earliest, for the 2015-16 season, by which point the Hansen project presumably would be in the clear, or dead.

But any award of a franchise would be burdened with playing two or three years at KeyArena, which has only about 11,000 seats from which both goals can be seen. But the NHL has a recent history of playing in temporary buildings while a new one is built.

However, there is one solution that would eliminate the council’s obligation to move the MOU away from the NBA — funding privately a new building, whether partnering with Hansen; a purchase of Hansen’s approved site; attempting a vast remodel of the Key, or creating a new building elsewhere at the Center, most likely at Memorial Stadium.

That’s a lot of maybes. But a possible exit by Ballmer from a Seattle NBA bid, coupled with an apparent urgency by the NHL, has a real possibility to change the sports conversation in Seattle.