Kiero Small next up for Seahawks’ magnificent 7s

At 5-foot-8 and 247 pounds, Kiero Small is a fullback straight out of Ripley’s Believe It or Not. At Arkansas, he broke 26 face masks of those foolish enough to go low with him. 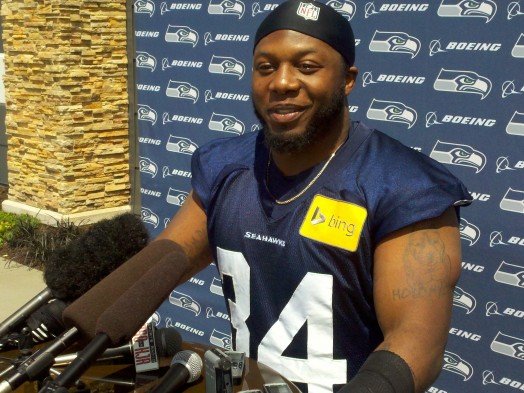 Seventh-round draft choices in the Pete Carroll regime are a bit like art-house films — obscure and even bewildering to many. But every once in a while, something clicks into a great commercial success.

Offensive linemen J.R. Sweezy and Michael Bowie were previous seventh-rounders who became Seahawks starters, and LB Malcolm Smith was a Super Bowl MVP. Now comes Kiero Small, who at 5-foot-8 and 247 pounds is the most bewildering yet, seemingly a better fit for Fellini than fullback.

“He’s a fullback — he’s a legit fullback,” he said after the Seahawks’ three-day mini-camp for rookies concluded Sunday. “He loves the position, and he has a sense for it and a little chip on his shoulder about it.

“I’m hoping that he would be a real factor in special teams as well. He’s a tough guy and he can catch the ball really well too. The position is not anything that he can’t handle; he really is well-equipped for it.”

Again, the Seahawks go counter to NFL convention — even drafting for the fullback position is odd, since it has become the rotary-dial phone of pro football. Then they pick a guy built like one of those tarmac jitneys that pull airline-baggage carts.

Small is about as subtle, too. The most compelling factoid of his three-year tenure at the University of Arkansas is that he broke 26 face masks of those who dared to get low enough to attempt to out-root a low-slung Razorback.

“It was just running there,” he said, smiling, “and putting my face on people and playing a physical brand of ball.”

That’s the kind of esotoric marker that appeals to the Seahawks’ John Schneider, who is probably the only GM in the NFL who consults Ripley’s Believe it or Not before looking at standard draft data.

“He’s a total thumper, man,” he said after the draft a week ago. “I like him a lot.  He’s super tough, plays really low, digs guys out.  He’s seriously tough.

Chuckles ensued, because Schneider is slightly shorter than Small. But he doesn’t have to tackle him. He just has to pay him.

Schneider said Small reminds him of Rock Cartwright, a 5-7, 223-pounder out of Kansas State, a seventh-round draftee of the Washington Redskins in 2002 who managed a 10-year NFL career out of being meaner than a five-gallon bucket of cat poop.

Small is used to denigrations over his size, which means he’ll fit right in with many of the odd-sized one-offs Schneider and Carroll enjoy collecting like misprinted stamps.

“A lot of guys said when I was at home that I wouldn’t get into school,” Small said. “People said I wouldn’t get to a Division One university. So they can say what they want, but I figure if I work hard and get a shot, it’s on me after that.”

He now has his shot at pro ball. With the champs. He can hardly believe it.

“It means everything,” he said. “When I got drafted, it was a dream that I had since I was a kid. Then to come to a team that I really rooted for through the whole playoffs . . . I just love the way the Seahawks play football. It’s a physical brand of ball.”

He grew up in Baltimore, attending a Catholic prep school built on the grounds of the St. Mary’s reform school that housed the young Babe Ruth. Small’s father sent him off to military prep school in Pennsylvania, but after a semester of answering 4 a.m. reveille calls, he came back home.

For a year, he worked the family’s shop, making and selling T-shirts.

“I was selling T-shirts every day, waking up catching the bus to work,” he said. “I pretty much thought football was over for me. One day, I just woke up and said this isn’t where I want my life to go.”

He called multiple junior colleges in California before getting a yes from Hartnell JC in Salinas — as long as he could pay for his own plane ticket and rent. He live with six other guys in a two-bedroom apartment.

He was named a JC All-America after two years of playing fullback and linebacker.

That worked him into a scholarship offer from Arkansas in the SEC, where in 2013 he played in all 12 games, starting the final eight.  Of his 60 touches, none were for negative yardage. He had 151 yards and three touchdowns on 40 rushes, 128 yards and one touchdown on 19 catches and one 11-yard kickoff return. He also was the lead blocker in a run-heavy offense that featured a freshman who ran for more than 1,000 yards.

If he has an immediate future with the Seahawks, it’s as a special-teamer, where his locomotion may create new meaning for the term wedge-buster. One thing in his favor is that he’s learned, in just three days, a pivotal secret in NFL survival.

“I think what I learned is that it’s a lot about the details,” he said.  “With this brand of ball, everybody is fast, everybody is strong, everybody was pretty much the man where they came from. So you have to be real detailed in your work.

“That’s something that I’m really trying to get better at.”

Otherwise, there’s a bus pass and a map to the T-shirt shop waiting for him back home.