Instead of the traditional jersey with his name, President Obama Wednesday was given a symbol of the bigger picture in Seattle: A “12” flag. 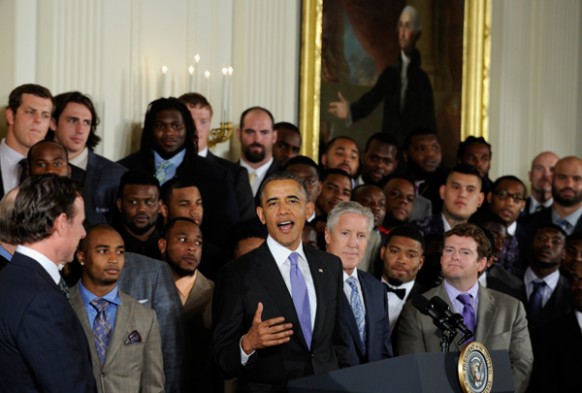 President Obama had plenty of wisecracks ready for the Seahawks. / Seahawks.com

Finally, President Obama learned what it felt like to be a big deal. He had a chance to hang out Wednesday afternoon with the Seattle Seahawks. If he does all right in the next year, the Seahawks will let him do it again on their next trip to Washington, D.C.

Then perhaps he’ll get to meet RB Marshawn Lynch. The President not only disclosed that Lynch was absent from the traditional ceremony of champions, he said he was a personal fan of Beast Mode’s media style.“I just wanted to say how much I admired his approach to the press,” Obama said. “I want to get some tips from him.”

Chuckles erupted around the White House’s East Room. The President, a big sports fan, demonstrated he knew a little about the Super Bowl champs, including Lynch’s notorious shyness when it comes to big media events he can’t control.

This show wasn’t Lynch’s style, even if the trip was the final get-together for the 2013 team. For everyone else, it was a celebration of the pinnacle of American team sports achievement, particularly for the Twelves, the Northwest’s manic fan base.

For them, the Seahawks offered a nice touch. Rather than give Obama the traditional team jersey with his name on the back, he was presented with a 12th Man flag.

Obama even had a snarky remark for Seattle’s intense home-field dominance.

“It’s kinda cheating,” he said, grinning, referring to CenturyLink’s acoustics. “They hired some physicists to make it so. There’s lots of smart people at Microsoft designing those things.”

In fact, his mention in introductory remarks of the win over the rivals in the NFC Championship drew perhaps the biggest spontaneous yelps in the crowd of Washington state politicians, business leaders and other invited expats in the nation’s capital.

Obama mentioned DT Brandon Mebane’s belly roll sack dance (“you can’t do that in the White House”), Russell Wilson’s newly shaved head (“he looks OK — he doesn’t have a peanut head”) Richard Sherman (“We’d give him the mic, but we gotta go in a little bit”), the Seahawks receivers being called pedestrian in a national story (“That made Angry Doug Baldwin made even angrier”) and the team swagger (“We don’t have to tell you . . . they do a pretty good job themselves”).

A little more seriously, he mentioned Wilson’s being the second African-American quarterback to win a Super Bowl, “and the best thing about it was nobody commented on it,” as well as the team’s relative lack of pedigree: “It excites me when the whole is greater than the sum of its parts.”

Obama even mentioned the downtown victory parade’s famous photo/video of the raucous curbside crowd politely waiting for the “walk” signal before crossing the street.

“That’s Seattle for you,” he said.

Responding for the Seahawks, whose owner, Paul Allen, stood in the front row with the team, coach Pete Carroll expressed his gratitude by suggesting that Obama, as commander of special forces, could enlist his squad for help.

“The Boom is here,” Carroll said. “Just a phone call away.”

The celebration marked one of the most majestic moments in sports history for a place that has had a long, dreary stretches between sports-team highs. And the White House as a souvenir from the folks who made it possible.