Houston Astros are 12-7 at Safeco Field, adding one more Sunday in a 4-1 triumph that had Mariners manager McClendon grousing about making average pitchers look great. 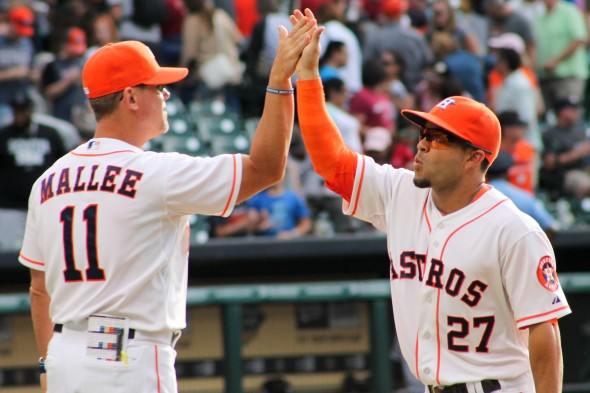 Jose Altuve, all of 5-foot-5, has come up big against the Mariners. / Wiki Commons

Fortunately for the Mariners,  the sorry As-tros have left town, succeeded this week by easier marks such as the Angels and Tigers. The Mariners can’t take much more from the worst team in Major League Baseball.

Houston did it again Sunday, working Hisashi Iwakuma into his first loss, ending the streaks of James Jones and Robinson Cano and generally over-performing for their station in the baseball cosmos, winning 4-1. After scoring a season high in runs Saturday with a 9-4 win, the Astros not only head out with a 2-2 series split, they are 12-7 at Safeco Field and 19-19 in their sordid history with Seattle.

The Mariners are letting Beavis and Butthead ride into town, drink their whiskey, grab their women and steal their horses.

Judging by the growl and rumble in manager Lloyd McClendon’s baritone, he’s getting a little weary of the wussiness.

“At some point you’ve got to stop giving credit to average pitchers,” he said, taking a direct shot at Houston starting pitcher Dallas Keuchel, who pitched a complete-game four-hitter. “That becomes a broken record. At some point, we’ve got to start swinging the bats.”

And the corollary: You have to stop making average hitters great.

Iwakuma was off, drifting pitches up in the strike zone and providing little mystery in his pitch selections. He gave up nine hits in his seven innings, including two-run homers to George Springer in the sixth and Marc Krauss in the seventh.  That’s right, Springer and Krauss, who may as well be Maris and Mantle to the Mariners.

Saturday night, Springer, in his 33rd major league game, had career-highs of two homers and five RBIs. It could have been written off to the starting pitcher, Brandon Maurer, who does that to a lot of lineups. But Iwakuma?

“They had nine hits, but it didn’t feel like nine hits,” said the Mariners No. 2 starter, who apparently was watching a different game in his head. It actually seemed like more, but a couple of double plays muted the damage.

And then, there’s Jose Altuve. The teensy tormentor. The vicious varmint. The Oompa Loompa of MLB.

Altuve, all five-foot-five of him, had two hits Sunday, scoring on Springer’s homer. For the four-game series, he was 9 for 16 with a homer and a walk. Yes, he hits a lot of teams that way — his 70 hits leads the majors. But 21 percent are off Seattle pitching.

Altuve is a 24-year-old second baseman from Venezuela in his fourth season, but suddenly he seems as good as Cano. Besides hitting .326 to Cano’s .323 (his 31-game streak of reaching base is over), Altuve has an 85-game errorless streak, a franchise record and the longest active streak in the majors. And he leads the American League in stolen bases with 17.

With Altuve hitting leadoff, and the 24-year-old Springer, a right-fielder, hitting second, the Astros apparently are set at the top of the lineup for about the next decade.

Meanwhile, the Mariners (24-25), neither hopeless nor hapless this season, nevertheless can’t sustain much on offense.

“It had nothing to do with the approach. We had four hits. You don’t win games with four hits and one run.”

The Mariners would have been shut out if it hadn’t been for a throwing error on Kuechel.

In the second inning, Mike Zunino and Michael Saunders each had singles. Cole Gillespie had a swinging bunt that Kuechel fielded but threw wildly to first, allowing Zunino to score. But Kuechel struck out SS Brad Miller — back in the lineup for the first time in four games — to end the threat. He was the first of 22 batters to face Kuechel, and he allowed only one baserunner, a seventh-inning single by Kyle Seager.

If McClendon is right about Kuechel having “average” stuff, the Mariners are in trouble. Some good pitchers are coming up in the season’s longest homestand, which means the Seattle offense might be looking at production that makes Altuve look like Barry Bonds.