Thiel: Seahawks back, prepping for the crucible

The champs are back in town 90 strong. It’s player development time for Coach Pete Carroll, who gushed about returning OG James Carpenter as if he found a new player. 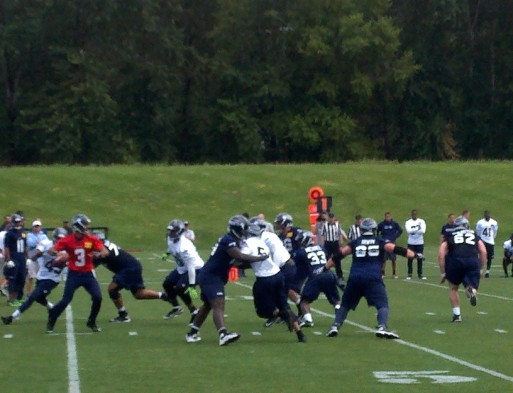 Led by Russell Wilson (3), the boys are back in town. / Art Thiel, Sportspress Northwest

RENTON — Sure, the game was great, the parade outrageous and the White House visit thrilling. But now it can be told: The coolest thing about winning the Super Bowl.

Grand as life has been since the evening Feb. 2 in the Jersey swamplands  —  the ultimate perk: The Seahawks are unable to buy their own drinks anywhere in town — it’s the little affirmations that brighten the day-to-day.

Unfortunately for them, that day-to-day is so yesterday. At least in the opinion of coach Pete Carroll. Having been in the position of defending seven Pac-10 championships and two national championships while coaching college ball, he is aware of the Prime Directive for the next eight months.

What’s happened before is obviously significant,” he said, “but it doesn’t mean anything unless we go out and keep working.”

Hard as was winning one, winning two is a face full of fist. So hard, in fact, that Carroll was reminded Tuesday that the last Super Bowl champion to even win a playoff game the following season was the 2005 New England Patriots.

Carroll swatted away the thought as if he were Richard Sherman against 49ers QB Colin Kaepernick.

“I could (not) care less about that stat,” Carroll said, with as much of a harrumph as the man of eternal sunshine could muster.

One thing we have learned observing Carroll is that the conventions of his industry matter little to him. The habits of other teams, the statistics and records they create, are virtually meaningless. Just as is the Seahawks’ 2013 season to him now.

Through word and deed, he manages to pull his players’ eyes away from the rear view mirror, as well as the far horizon and their own personal histories, then gets them to work incrementally and collectively on the task of the day.

Seems like the plan of any experienced professor, plant manager or software executive. It’s a lot harder to do when the whole world is watching, most hoping he’ll fail. Skeptics want to consign the Seahawks’ success to a mutation, a two-headed calf. Because in the short-attention-span theater that is American pro team sports, if you do a weird thing twice, it means the industry must change.

If the Seahawks are 9-3 by December, listen closely and you’ll hear steam start to pop rivets from the NFL boiler.

Tuesday was the first day of 2014 on the Seahawks calendar. “Organized team activities” are what the NFL calls padless practices, free of collisions and tackles, where 90 players are invited to compete for 53 roster spots with no opportunity to bludgeon one’s way to prominence.

After 10 OTA’s, there’s a mini-camp in June, a training camp in July, exhibitions in August and sincere hostilities in September. But that linear thinking is for fans and media and not part of the conversation at practice.

“We just do this one day at a time,” Carroll said. “We did exactly that today. That’s a good indication that they guys are on board with what we’re talking about. This takes discipline, and commitment to doing it the right way. So far, everything is going fine. We have a long ways to go.”

That may sound unenlightening, but these OTAs are where Carroll and his staff can do a lot of developmental coaching without worry over game plans. And player development is where these guys excel.

Here’s a little secret that Carroll’s methods exposed: A lot of the athletes competing at this level are as even as they are good. That means they are interchangeable. Now, coaches don’t want to say that directly to players or the public, but the fact is that Carroll and general manager John Schneider know that they can replace fairly easily all those who left in free agency.

They deemed a handful of the 2013 crew special, and had to pay premiums keep Thomas, CB Richard Sherman, DL Michael Bennett and, next offseason, Russell Wilson.

Most important: They seek to develop marginal players on the roster into frontliners.

The best example from Tuesday’s conversation was James Carpenter, the 330-pound guard the Seahawks took in the first round four years ago who has yet to live up to his potential — except for the last few games of the past season and the Super Bowl. Carroll reserved his biggest gush for the progress of Carpenter, who dropped 15 pounds and actually appeared to move like a standard biped, only larger.

“He’s had a fantastic off-season,” he said. “He’s been focused, he’s in it, and he’s moving like crazy. He doesn’t look like the same guy physically. He’s looked the best he’s ever looked by far right now.

“So we’re really fired up about James. He’s excited about it too. He feels great, he’s the smartest he’s been, he understands the most, and he feels the best. That’s all great stuff for us.”

Carpenter’s right knee has been injured, affecting his balance. But now he’s healthy. If that stays true, the Seahawks have added an almost-new, first-round-caliber lineman.

When many declared Carpenter a bust, Carroll and O-line assistant coach Tom Cable stayed with the big guy, perhaps now creating a player where once there appeared to be a stiff.

Doesn’t always work that way. But with these guys, it happens more than most.

if you were listening to President Obama’s salute to the Seahawks at the White House last week, he mentioned the four members of the Legion of Boom by name. He included Byron Maxwell, a sixth-round draft choice in 2011 who started 2013 as a third-stringer, and ended up replacing Brandon Browner and Walter Thurmond on the way to helping win a Super Bowl.

That’s player development. And that’s how a team can survive hubris of champions and the predations of free agency.

That’s not a prediction. But it is the plan for handling a 2014 fist to the face.

The intriguing news of the day was Carroll’s declaration of Thomas as the successor to departed Golden Tate in returning punts. Thomas returned punts early in his college career at Texas, but has not done so in the NFL. Carroll also named Percy Harvin, Richard Sherman and Bryan Walters as competitors . . . Thomas was fired up: “I’ve been trying to tell Coach Carroll to put me back there for the longest,” he said. “I always try to go back there during walk-throughs, just to try to sneak a punt return. I’m an offensive guy at heart. That’s why I don’t try to go out of bounds when I catch interceptions.” . . . LB Malcolm Smith, the Super Bowl MVP, was in a boot after having ankle surgery to remove “loose bodies.” He’ll miss OTA’s but is expected to be ready for training camp. . . . Same for LT Russell Okung (toe) and SS Kam Chancellor (hip). Carroll called Chancellor’s hip surgery “significant” but said he would be ready for camp . . . DT Jesse Williams, who missed last season with a knee injury, fell and had a laceration, but is expected back soon . . . WR Sidney Rice, returning from ACL surgery, sat out but is expected for camp . . . Since OTA’s are voluntary, no one was surprised Marshawn Lynch wasn’t around. Asked if the media will see him, Carroll said, “You just may . . .” or may not. Others not around for personal reasons were DE Cliff Avril and QB Tarvaris Jackson. . . . The Seahawks completed the signings of their nine-member draft class by signing fourth-round draft selections WR Kevin Norwood and LB Kevin Pierre-Louis. They also added undrafted rookie free agent linebacker Horace Miller, who participated in Seattle’s rookie mini-camp last week.