Interest by players and fans in Mexico is a key component in MLS’s new TV deal. More players such as the Sounders’ Gonzalo Pineda could come north. 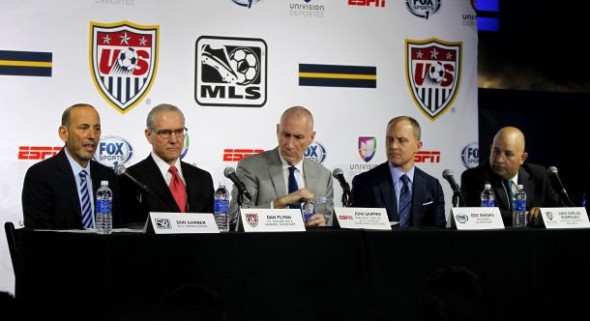 As the MLS schedule approaches a three-week break to coincide with the start of the World Cup, it’s intriguing to ponder the importance of the second half of the season. The sport gets a huge boost in America from casual fans who tune into the World Cup every four years. Some of that interest naturally spills over into America’s top league after the tournament ends.

Capitalizing on that interest is critical as MLS heads into the second half of its 16th year and attempts to build momentum toward the new TV deal — $720 million over eight years — that begins in 2015. Some of that momentum may come from a new source of MLS interest: Mexico.

The TV deal was announced May 12  and includes long-time partner ESPN as well as Fox and, perhaps most importantly, Univision. The Spanish-language TV network based in Miami will televise a league game of the week each Friday night under the new agreement. The network will cross-promote MLS with Liga MX, the top league in Mexico. The hope among Univision execs is that interest in MLS among Hispanic fans will continue to grow.

ESPN ratings for last year’s MLS Cup title match between Real Salt Lake and Sporting Kansas City were down, but the broadcast on Univision’s UniMas network was not only up six percent from the previous year, but actually had slightly more total viewers than did the ESPN broadcast.

Obviously this is not a recipe for long-term success for MLS. To grow, it must have better numbers on their American TV partners and need to reverse the trend of declining ratings for the championship game.

But the increase in viewers on UniMas is a great indication that the league is gaining awarenness and even acceptance among Hispanic viewers in America. That could help raise interest in the league in Mexico, where soccer fans focus most of their attention on Liga MX. A higher profile would not only help the league’s bottom line, it might lead to more top Mexican players giving the MLS a look.

Sounders FC midfielder Gonzalo Pineda is in his first year with the team after an outstanding career in Liga MX, including 44 appearances for the Mexico National Team. In 2013 he suffered a sports hernia injury so severe it was thought by many (including him) that his career might be over. He recovered to the point that the Sounders offered him a contract. He is fifth on the team in minutes played and scored the game-tying penalty kick in last week’s 2-2 draw in Vancouver.

Pineda is 31, perhaps not in the prime of his career, but certainly not at the end. He didn’t expect to play in America and admits he didn’t know a lot about the Sounders until he arrived. But since March he has seen the talent level of MLS, and he’s noticed anecdotally the increase in the level of interest in the league in conversations with players  playing in Liga MX.

“Players (from Mexico) have talked to me because they think they might want to come to MLS at some point,” he said. “They’ve asked me about the salaries, the games, and the environment. They are interested in this league. It’s not like what we thought in the past. It has a lot of competition and every game is difficult.”

Pineda says Mexican players and fans have appreciated the influx of talent into MLS over the past decade.

“Ten years ago, the MLS wasn’t like it is right now. It didn’t have the players we now have: Julio Cesar, Obafemi Martins, Clint Dempsey, Landon Donovan, Robbie Keane, David Beckham. In Mexico they are saying, ‘Why? Why are they coming to MLS?'”

The answer is probably slightly different for each player, but usually boils down to the same simple thing. “Players follow the money,” says Sounders FC Sporting Director Chris Henderson. “They have a short window where they can play and they’re going to go where they make the most.”

The MLS of 10 years ago was on shaky ground. Two franchises went out of business and the operation was still a money-losing deal. But the league recovered from the stumbles of the early part of the new century and grew to the point where teams could afford to go after top-name talent. That top-name talent attracted more fan interest. The increased interest and revenue led to further pursuit of big-name stars, leaving Henderson feeling bullish on the future, particularly how it relates to Mexico.

“We’re going to start competing with Mexico because we’re now able to pay some of these top players,” says Henderson. He says a guy like Pineda coming to the league and having success might help influence other talented Mexican players to consider a career north of the border.

“At our academy tournaments there are Mexican league scouts there all time. We’re seeing it go both ways, but more so Americans being offered deals in Mexico. I think you’re going to start seeing the opposite.”

A record 15 American-born players competed in Liga MX this year. As of today there are seven Mexican-born players on MLS rosters. The cross-pollination should continue building interest in both leagues in both countries. The Univision aspect of the new MLS TV deal might increase the northern flow of talent.

“Univision is big in Mexico, so that will make a connection from the Mexican people to MLS. That will help, but MLS needs to keep bringing good players from Europ, That will create more interest among good players in Mexico to come, not just for the end of their careers.”

When Pineda began his pro career 10 years ago, the thought of a talented Mexican League player in the prime of his career looking to get a deal in the MLS was beyond far-fetched. It’s probably still a long shot. The stars would have to align, but based on recent history, and the potential impact of the league’s Univision TV deal, we’re not as far off from seeing it happen.

Friday: Sounders GM Adrian Hanauer weighs in on the Univision deal and the potential of Liga MX players moving to MLS.