Eager to win with Washington, Brian Wolfe surrendered his partial scholarship to bring in other players. Now he’s all-conference, and Huskies are in NCAA tourney. 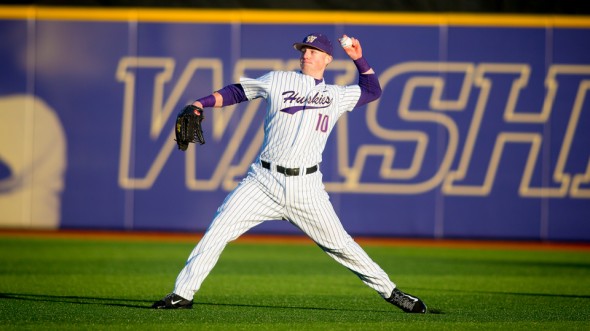 Brian Wolfe gave up his partial scholarship and was a three-year walk-on who became all-conference. / Scott Eklund, Red Box Pictures

Wolfe, the senior co-captain whose amazing turnaround season mirrors that of his Washington Huskies baseball team heading into the NCAA tournament, does not receive a dime of scholarship money.

You read that correctly. The second-leading hitter in the mighty Pac-12 Conference – the Huskies’ leader in batting, slugging percentage, home runs (tied), runs batted in and total bases – is a walk-on who has played in all 55 games this season and has yet to make an error.

All while playing much of the season with a fractured left thumb wrapped in tape.

Wolfe, who led the Pac-12 in batting in conference games at .381 (he’s hitting .361 overall), said he mutually agreed with coach Lindsay Meggs to reduce his partial scholarship following his freshman season. One year later, Wolfe said he agreed to give up his scholarship entirely, all in the interest of helping Meggs revive the baseball program at Washington.

With NCAA Division I baseball teams limited to the equivalent of 11.7 full scholarships, Meggs greatly appreciated Wolfe’s sacrifice. Wolfe, in turn, has appreciated Meggs’ impact on his baseball career, and his life.

“I was never really pushed like he’s pushed me the last five years,” said Wolfe, who redshirted due to knee surgery in 2012. “There no way I can repay him for that. It’s something I’ll carry forever.”

Wolfe initially had his doubts about Meggs. Wolfe was a highly sought recruit out of Snohomish High School, but he was recruited to Washington by Ken Knutson, the mild-mannered predecessor to Meggs. The new coach’s searing intensity shocked Wolfe.

As it turns out, Meggs is a man who appears to have helped salvage Wolfe’s lifelong dream of playing baseball for a living. Meggs stuck with Wolfe through two knee operations and three years as a part-time starter, during which Wolfe hit just .215. This season, Wolfe made all-conference.

“When he got here, I didn’t understand (what it takes to succeed),” Wolfe admits. “I was young. I was dumb. I was this kid who thought he was just going to start from Day One and be All-Pac-12 and get drafted. Blah, blah, blah.”

Wolfe said the Huskies had “a lot of issues off the field” when Meggs arrived, including a sad academic record. The Huskies’ improvement in the classroom under Meggs (the Pac-12 Coach of the Year) has been every bit as impressive as their improvement on the diamond.

“He held us accountable in every little thing and detail that we did,” said Wolfe, who has earned a communications degree. “EVERYTHING. Every. Single. Thing.

“That might be one of the biggest life lessons I’ve ever learned from him.”

Meggs says he inherited a team filled with players who felt “entitled.” Wolfe agrees with the coach, and the two men also agree that the current team’s sum is much greater than its individual parts.

Wolfe said the Huskies “definitely” came into the season believing an NCAA tournament bid was possible, but he acknowledges that their level of success has “kind of shocked us a few times.” The Huskies are 39-15-1, finished second in the Pac-12 and were ranked as high as fifth in the nation by Baseball America magazine. That’s rather impressive for a team picked to finish 10th in the Pac-12 in the preseason coaches poll.

“We’ve kind of used that for fuel,” Wolfe said.

The Huskies are 14th in Baseball America’s Top 25 after losing four consecutive games (three by shutout) before ending the regular season with a win over defending national champion UCLA. Meggs and Wolfe said a hard-fought series at Pac-12 champion Oregon State two weeks ago drained players mentally for a spell, but the Huskies certainly seem jacked as they prepare for Friday’s NCAA regional opener against 25th-ranked Georgia Tech (36-25) in Oxford, MS. The ESPN3 webcast is set for 1 p.m.

That is especially true of Wolfe, according to Forgione.

“There’s no harder worker on the team,” said Forgione, the Pac-12 Defensive Player of the Year. “He puts his time in, and he knows exactly what he has to do.

Indeed, Wolfe says he would be a content “minor league lifer” if that proves to be the ceiling on his pro potential. Scouts are looking at him as an outfielder or first baseman – he usually starts in right field for Washington, but spends some time at first – and he’s heard predictions that he’ll be drafted next week anywhere from the sixth round to the late rounds.

Regardless, Wolfe will always cherish his senior season at Washington.

“We’re all so happy for him, and proud of him,” Forgione said.

The junior shortstop added, “He’s such a strong person and player. I know his faith has a big deal with that. That’s what’s drives a lot of guys on the team.

“I just know there’s no giving up with him. He’s been through it all.

“He knows exactly what to do to get through it, so there was no doubt in my mind that he’d be able to have a breakout season like this.”

Wolfe said he is convinced Washington’s breakout season would not have taken place so soon without his former scholarship money being spread around the roster. He’s thankful to his parents and a great aunt for covering some of his college costs. But for Wolfe, college baseball has been a play-for-pay proposition.

Wolfe said he considers that quite a bargain. The reason is simple.