Former University of Washington basketball great Bob Houbregs, the only consensus All-America choice in school history, passed away Wednesday at 82. 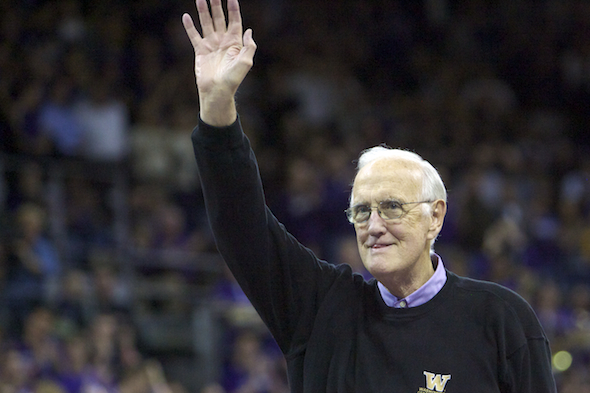 Bob Houbregs, a Washington basketball icon, salutes the crowd at the 2011 Sports Star of the Year banquet when he was honored with a Legends award. / Drew Sellers, Sportspress Northwest

University of Washington basketball legend Bob Houbregs, the 1953 NCAA Player of the Year who led the Huskies to that year’s Final Four, died Wednesday at 82. A 1987 inductee into the Naismith Memorial Basketball Hall of Fame, Houbregs had been in failing health in recent years after suffering a debilitating fall at his home in Olympia.

A 6-foot-7 hook shot specialist who lettered at Washington from 1951-53, Houbregs is the second Husky basketball icon to pass away in the last year, following former head coach Marv Harshman, who died in April 2012. 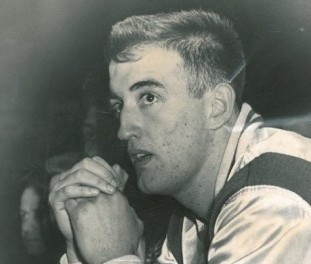 Bob Houbregs led the UW basketball team to the 1953 Final Four and was named NCAA Player of the Year./ David Eskenazi Collection

“You talk about Washington basketball, the legends and the history and those are two that played big parts in the history,” head basketball coach Lorenzo Romar said in a statement. “They were nationally respected by many people. In Bob Houbregs’ case, he was done playing a long time ago, but you still respected him for who he was just as much as what he had accomplished. Marv was the same way.”

David Eskenazi, a Seattle sports historian who counted Houbregs among his many friends, attended a basketball old-timers get together with Houbregs earlier this month.

“You’ll never find a finer or classier person than Bob Houbregs,” said Eskenazi. “His remarkable athletic ability and achievements were only exceeded by his warmth, kindness, humility and humor. He loved people, and had a knack for making everyone around him feel special. He will be truly missed, and will be remembered forever with boundless affection and respect.”

Born March 12, 1932 in Vancouver, B.C., the son of John Houbregs, who starred for various Seattle pro hockey teams — including the Seattle Sea Hawks — in the 1930s, Bob Houbregs attended Queen Anne High School, where he starred in basketball and baseball, as an All-City first baseman. Although recruited by dozens of colleges, Houbregs always knew which university he would attend.

“My dad always told me I had no choice,” Houbregs told Sportspress Northwest in 2011. “I was going to be a Husky and that was fine with me. My dad told me if I was going to live in Seattle, there was nowhere else to go. So I never looked to go anywhere else. I’m glad I didn’t.”

The Huskies were more than glad that he didn’t, either. Recruited to the university by coach Art McLarney (1948-50), who had succeeded legendary Hec Edmundson, Houbregs joined Tippy Dye’s varsity in 1950-51 and led the Huskies to a 24-6 record and a berth in the NCAA Tournament. In 30 games, Houbregs averaged 13.6 points and 9.7 rebounds. The 1953 Huskies averaged 72.3 points per game (no UW team would average more until 1967). Houbregs was responsible for 25.6 of the total (still the school single-season record and 2.6 points per game better than the No. 2 mark, Louie Nelson’s 23.0 in 1973). Houbregs also averaged 11.6 of Washington’s 43.3 rebounds per game, the principal reason why the Huskies outscored their opponents by 13.2 points on average, still the school mark six decades later.

During the latter stages of the 1952-53 season, Houbregs established himself as a strong candidate for NCAA Player of the Year, no small feat considering the national landscape – Walter Dukes, Tom Gola, Bob Pettit — with a string of offensive efforts that still pop out on Husky lists: a school-record 49 points vs.Idaho, 36 vs.California, 35 vs. Idaho, 33 vs. Oregon and Oregon State, 31 vs. California and 30 at Oregon, vs. Oregon State and at Washington State.

Bob Houbregs (25) starred for the Washington Huskies from 1951-53 and remains the school’s only consensus All-America player. / David Eskenazi Collection

The twin wins over Cal also conveniently created March 13 the first meeting between Washington and Seattle U., in the NCAA West Regionals at Gill Coliseum in Corvallis, OR., a matchup described in newspapers of the day as one of the most anticipated sporting spectacles in state history. Recognizing grandstand lather when it saw it, KING-TV became the first local television station to televise a game outside the state of Washington.

“It was a game that had been building for four years to a crescendo, once the O’Brien (Johnny and Eddie) twins came there,” Houbregs told Sportpress Northwest in the same 2011 interview. “We had played them twice as freshmen and they started having success, dramatic success. Seattle U. was right there with us in record (28-3). The media built up the game probably more than it should have because the players (Huskies and Chieftains) got along really well. The game also got taken over by the fans at each university, and some of what was said (on both sides) was not very nice.” Bob Houbregs served as Sonics’ GM when the club drafted Fred Brown out of the University of Iowa in 1971. / David Eskenazi Collection

Largely because of Houbregs, Washington removed the drama early, racing to a big lead. The Chieftains put Wayne Sanford on the Washington star, then tried to double team him.

“They (Seattle U.) didn’t do it right,” said Houbregs. “Most of my teammates got me the ball in the right place at the right time. Stupid me, I missed my first layup” (dunks were not allowed in that era.)

But not much else. With Houbregs converting layups and swishing hooks, Washington rolled over the Chieftains. With three minutes to play, Houbregs took his 43 points to the bench, but Husky fans cried for Dye to put him in so he could break the NCAA Tournament record of 44 set by Clyde Lovellette of Kansas a year earlier. Houbregs quickly scored his 44th and 45th points and returned to the pine (the record would stand until Hal Lear of Temple scored 48 against Southern Methodist in 1956).

“We took them out of it pretty early,” said Houbregs, whose Huskies prevailed 92-70 (first-team All-America Johnny O’Brien scored 25 for the Chieftains).

When the Huskies reached the 1953 Final Four in Kansas City, they were favored to win the tournament. But they lost to Kansas in the national semifinals, largely due to Houbregs collecting four fouls in the first half.

“I’d never gotten four fouls in the first half of any game in my career,” said Houbregs. “Not even close. My last foul was a fair call: I got off balance and fell into a player. But the other fouls I didn’t deserve. They were touch fouls, really.”

The Huskies finished third after routing Louisiana State 88-69, which ended Houbregs’ UW career. He departed having scored 1,774 points, the No. 1 mark in school history and currently fifth-best all-time. He averaged 25.6 points as a senior, best in school history. 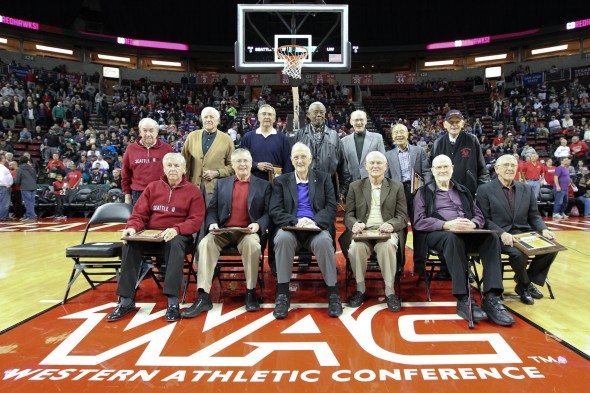 Members of the Seattle U and Washington teams that first played against each other in the 1953 NCAA tourney were honored at halftime of the Huskies-Red Hawks game at KeyArena in 2012. Seated at front row center is UW star Bob Houbregs. To his right are twins Eddie and Johnny O’Brien, SU stars. / Mike Badeau

Following his playing career, Houbregs went to work for Converse and eventually became general manager of the Seattle SuperSonics from 1970-73. Up until the time his health began to deteriorate, Houbregs was a frequent attendee at Huskies basketball games and always made himself available to reporters interested in Huskies hoops lore.

“He was a kind of a connector between the old and the new,” Romar said of Houbregs, a speaker at Harshman’s memorial service a year ago.

Houbregs remains the only consensus All-America in UW history, its only national Player of the Year, and the first player to have his number (25) retired (later joined by Brandon Roy).

“Bob was an icon in our community,” University of Washington Athletic Director Scott Woodward said of Houbregs, who still holds seven UW records. “His efforts on the court helped put Washington basketball on the map, but what made him remarkable was his character beyond the game of basketball. He had a way of connecting with people in a very genuine manner, and his presence will be truly missed here.”