Seahawks WR Doug Baldwin will get $13 million, including $11 million in new money, in a two-year extension that will allow him to be a free agent at 28. 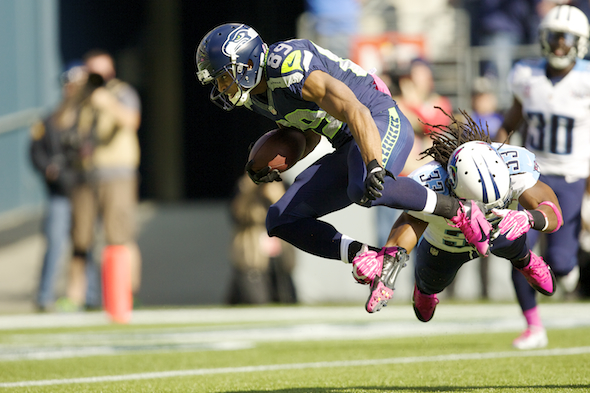 “Angry” Doug Baldwin apparently is a little happier this morning. The Seahawks’ wide receiver with an ever-present chip on his shoulder signed a two-year extension, according to a source in an ESPN.com story Friday. NFL.com reported the deal is worth $4.3 million a year for a total of $13 million, with almost $11 million in new money.

Not bad for an undrafted free agent.

Baldwin, 26 in September, was scheduled to make $2.2 million, the tender the Seahawks offered earlier that is mandated by his service time in the collective bargaining agreement. The shorter extension will allow him to enter free agency possibly still in his prime. In his three years, Baldwin has started 46 of 48 games and is the Seahawks’ leading returning receiver.

From his slot receiver position, Baldwin has been a consistent producer. In his rookie year of 2011, he led the team’s receivers in catches (51), yards (788) and touchdowns (four). Last season, he was second in receptions (50) and yards (778) and tied for first with five touchdowns.

He has been an effective third down receiver, as he and QB Russell Wilson seemed to have mastered the art of the sideline reception when the pass can be either caught or go out of bounds with no danger of interception.

In the NFC Championship, he had six catches for 106 yards.