Roenis Elias was dazzling — the first Mariners rookie since Freddy Garcia in 1999 to pitch a complete game shutout — in taking two of three from the formidable Tigers. 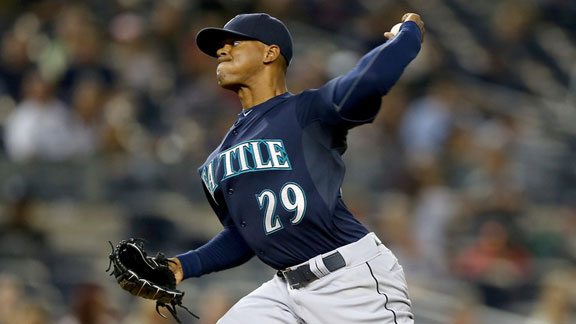 Roenis Elias pitched the first complete game of his career Sunday against one of the best offenses in baseball. / Sportspress Northwest file

Hitting 1-2 for the Mariners Sunday were oldster Endy Chavez and rookie James Jones. Seattle had three hitters in the lineup whose season averages were better than .238. The Mariners were up against the American League’s defending Cy Young Award winner, Max Scherzer.

The starting pitcher was Cuban refugee and rookie Roenis Elias in his 12th major league start.

They folded up the formidable Detroit Tigers like origami, 4-0.

The 31,407 on hand at Safeco Field weren’t quite sure what they were watching, but by the ninth inning, when Elias powered through the 2-3-4 hitters of Ian Kinsler, Miguel Cabrera and Victor Martinez, they were slamming hands and pumping arms as if it were a Seahawks game.

As they should, because they were present at something special — the first complete-game shutout by a Mariners rookie since Freddy Garcia in 1999.

To finish the homestand 6-5 and get back to .500 (28-28), the Mariners had to take two of three against manager Lloyd McClendon’s old team, which came into the series with the American League’s best record. Not only did the Mariners execute, they made McClendon’s goofy lineups look like wizardry.

It’s tempting to say Sunday’s was the most awkward lineup since Michael Jordan’s Tune Squad teammates in “Space Jam.” But at least the Tune Squad had Jordan. The Mariners’ Jordan, Robinson Cano, was on the bench for the fourth consecutive game with a hand injury.

But McClendon rolled out an even goofier lineup, leading off Saturday with Willie (Please Call Me Boom-Boom) Bloomquist at second, hitting .214, and including fellow backups John Buck, Stefan Romero, Cole Gillespie and Nick Franklin. The Twitterverse was certain it was the dumbest start outside of an unlimited hydroplane race, yet they beat the Tigers 3-2.

After Sunday, McClendon is entitled to say to Tigers management, which could have hired him to replace Jim Leyland, his mentor, “How you like me now?”

Instead, he stuck to his no-big-whoop persona, which is getting to seem more like Pete Carroll’s all the time.

“We just happened to take two of three from Detroit,” he said, tightly marshaling his head muscles into maintaining a straight face. “I was a little nervous, but I can’t let (the players) see that.”

One guy not nervous was Elias, who was dazzling with his fastball, curve and change-up. The booming Tigers offense was held to three singles and struck out eight times. Most remarkable was that the top five Detroit hitters, including Rajai Davis and Tori Hunter, went a combined 1-for-18 with a walk.

Able to throw a strike with any pitch (72 out of 111), Elias was in such command that McClendon didn’t blink when it came time to decide whether to relieve his pitcher.

“I’ve always told him if he pitches better, he can stay in,” McClendon said. “I thought he deserved the chance.

“I’ve said his stuff is as good as any lefty in the league. He just has to have command of it.”

The complete game was only the second of his career that had three minor league seasons before he surprised many by making the big club out of spring training despite having just 45 minor league starts.

“I just wanted to go back out there,” Elias, 25, said of the final inning, via translator Fernando Alcala.”I wanted to make my pitches and let them hit them.”

Kinsler flew out to center, Cabrera, the world’s leading hitter for what seems like most of the 21st century, grounded to second and Martinez flew to center.  1-2-3. No big.

“It was awesome,” said Brad Miller, who added the fourth-run exclamation point with his first homer since April 11. “Facing those guys for the fourth time . . .what a performance.”

First-inning doubles from Chavez — surprisingly called up Friday from AAA Tacoma to help deal with the injury absences of Cano and Corey Hart — and Michael Saunders showed that Scherzer was vulnerable. In his last two starts, he gave up 20 hits and 12 runs combined.

The Mariners added two in the fifth on singles from Dustin Ackley and James Jones and a double by Bloomquist, who drove in two runs Saturday, then Miller delivered in the sixth.

For the optimists in the Mariners’ hardy band of followers, the series win can be tacked upon the wall with the three-out-of-four against Oakland in May to suggest that there might be just a tad bit of reality to the Seattle competitiveness.

“As I said before, I like my team,” McClendon said. Apparently down to the last man on the bench. Cano needs to get healthy soon, or he may get Wally Pipped by Kitsap Willie.

Jones was replaced in the eighth inning when he experienced a tight groin muscle. The move was a precaution, and not considered serious . . . The Mariners were originally scheduled for a travel day Monday, but instead will fly to New York to play a makeup game against the Yankees. Felix Hernandez (7-1, 2.57) will throw for the Mariners, who had their April 30 contest against New York rained out. The Mariners play two interleague games in Atlanta, then travel Thursday for four in Tampa starting Friday . . . McClendon said no decision has been on Tuesday’s starter following the demotion of Brandon Maurer to Tacoma. The likeliest candidate is Erasmo Ramirez . . . The shutout was the Mariners’ second (May 8, Kansas City) . . . During the homestand, Michael Saunders hit .321 with nine RBIs in nine games . . . Detroit (31-22), shut out for the third time this season, has lost 10 of its last 14 after going 15-3 . . . The loss was Scherzer’s first since April 13 in San Diego . . . Combined with Chris Young’s start Saturday, Martinez, the AL’s batting average leader, was held hitless for two games in a row for just the second time this season.