After becoming one of the most eminent celebrities in the sports world, the Seahawks QB is back to business: “After tasting the Super Bowl, we want it that much more.” 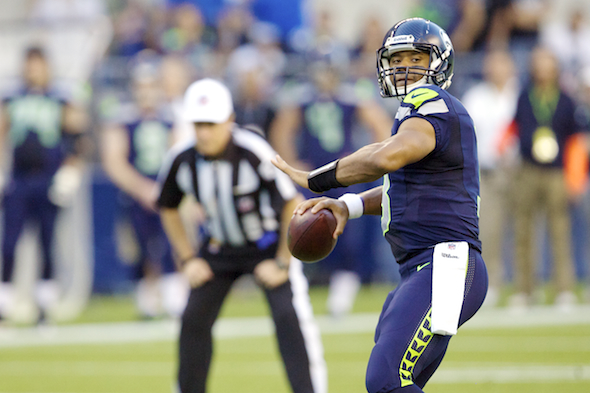 Everyone has eyes on Russell Wilson. / Drew Sellers, Sportspress Northwest

The signal accomplishment in the Seahawks’ championship season sounds a little boring, but it was the hardest of all: They met expectations. From the day after the previous Super Bowl, they were among everyone’s best bets to be the 2013 NFC champion, and the pick of many to go all the way.

The Seahawks were no one’s dark horse, no sleeper pick, no mystery team. The 2012 season was sufficiently impressive to put a target on them. The arrows bounced off. They wired the year.

Maybe it’s from being in the Seattle sports market for awhile, but that just never happens here. Teams have had good regular season successes, but faltered late. The mid-1990s Sonics, the 1995 and 2001 Mariners, the 2005 Seahawks. Even when the 1991 Huskies football team ran the table, they were saddled with a so-called co-championship with undefeated Miami because college football used a beauty contest format instead of playoffs, and the judges were divided.

Perhaps all those championship denials were part of the inspiration that drove the 12s to squeeze the Seahawks so hard they left hug prints.

Longtime fans who last experienced ultimate team success with the Sonics 35 years ago kept waiting for the trap door to open. Didn’t happen. Which helps explain why 700,000 leaped out of bed on a 10-degree morning, skipped work, school and other obligations to go downtown for some curbside therapy.

Comes now the venture into deep space — defending a championship. The unknown frontier is always spooky.

It is in that context we bring the first report from the commander, Russell Wilson. Yes, it’s still three months from the start of the season, but people want to know.

In three words: All is well.

Here is what he said after Monday’s padless practice:

“I think the thing that I’ve noticed more than anything else is just the energy level. After winning, sometimes it can go either way. Sometimes you can kind of fall off and not stay focused, or whatever. I think if anything, once we’ve been there, once we’ve tasted the Super Bowl and we accomplished that, we want it that much more again. We don’t talk about Super Bowls, we don’t talk about winning it again, we stay consistent with our words and that’s going 1-0 every day.”

Well, yes. Of course. What else? Even if the engine was on fire, Wilson would have said something like, “I don’t pay attention to the noise.”

But reading between the lines — which has become something of a local hobby regarding Seahawks mantras, homilies, chants and incantations  — Wilson is saying he’s keeping to the same rituals that carried the Seahawks through a season of high expectations fulfilled.

That may not sound like much, but maintaining habits in the face of ultimate success is a difficult task. Success causes people to come and go. It changes circumstances, fortunes and opponent strategies, because the world regards champions differently.

Wilson is a prime example. He surprised almost all when he volunteered after the Super Bowl that he and his wife, Ashton, were divorcing. Whether football success was a symptom, a cause or irrelevant isn’t known, but it is profound change. Wilson, who asked for privacy at the time, saw his wish respected by reporters Monday in his first availability since then.

It’s likely to stay that way unless or until Wilson’s game performances falter. But Wilson’s concern is far less about sating the public than in demonstrating to teammates that he can play through tough times. No one, including Wilson, can know that, so he relies on a simple work ethic of winning the day, in order to put deeds to his words.

He knows that his ubiquitous, post-Super Bowl public appearances on TV and at sports events arched a few eyebrows — he even went bowling recently in Bellevue with Justin Bieber — from some who prefer their sports heroes be encased in bubble-wrap until the next season.

He answered a question of whether it was hard to manage all the extras that come with ultimate success:

“No, not at all. It’s been one of those things – I stay pretty organized. I stay focused on what I need to stay focused on and getting ready for football. It’s been an exceptional off-season for me so far, in terms of getting prepared. My body feels great, my arm feels strong. My knowledge of the game has just grown so much more – exponentially more, I believe, at least – from year one to year two and year two to year three.

“Playing in big games like the Super Bowl, that always helps. My goal is to continue to work on the fundamentals, continue to be engaged in the huddle and bring my guys with me and just be exceptional when we practice. Hopefully, when we hit the field when it comes game time, we do really well.”

It’s not that Wilson has to sell himself. He just needs to assure teammates, and his coaches, that he will be himself.

There aren’t a lot of classes that teach how to be an international celebrity, or how to be a good-looking guy returning to the dating world, or how to handle being months away from earning $20 million a year.

Then again, there aren’t a lot of guys who can quarterback a team to a Super Bowl in a second pro season at 25 and 5-foot-11.

So rather than work up early fret lines about how all this will play out in January, Wilson seems to suggest that defending a championship in 2014 is a lot like living up to the expectations of 2013. While others may have apps for that, he has a bromide: Live in the now.