Alex Jackson was mostly a catcher in an elite high school in San Diego, but the Mariners want his big bat to advance faster, so he’ll be an outfielder who will move up quickly. 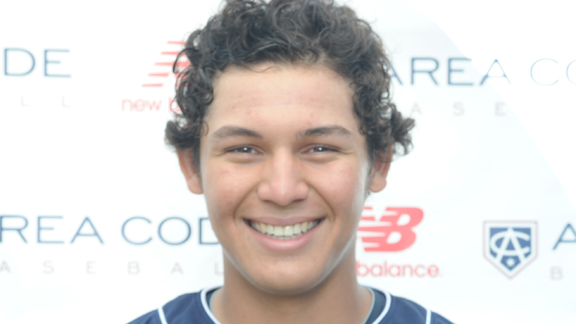 The Mariners took the player they wanted Thursday in the MLB first-year player draft, selecting catcher Alex Jackson out of Rancho Bernardo High School in suburban San Diego with a plan to convert  him to right field.

“It did,” Seattle’s director of amateur scouting Tom McNamara said of the first round falling the way the way he hoped. “We were pretty excited in that room . . . We’ve seen him play multiple positions, but we think down the road that outfield is probably going to be his best position.”

The draft began as many experts predicted, with three pitchers — Brady Aiken, Tyler Kolek and Carlos Rodon — going 1-2-3. The Chicago Cubs at No. 4 were the wild card. The Cubs selected collegiate catcher Kyle Schwarber from Indiana. At. No. 5, the Minnesota Twins took high school shortstop Nick Gordon, as many anticipated.

Then came the Mariners at No. 6, and Jackson.

“We like his ‘hit-ability’ mixed with his power,” said McNamara. “He’s not just a one-dimensional hitter. We think he’s a combination of both. We’ve been scouting him for the last three years.”

The 6-foot-2, 215-pounder was rated by Baseball America as the top position player available in the draft and ranked No. 4 overall. He was named the state freshman of the year (2011) and state sophomore of the year (2012).

Jackson was considered the best power bat available. MLB.com analysts project him as a 25-to-30 home run hitter at the major league level. The most severe criticism of Jackson: He ends up as a player who swings and misses too much and never makes a true impact.

Said MLB.com: “Jackson profiles as a middle-of-the-order hitter, though at what position he’ll do his damage at remains to be seen. He certainly has the tools necessary to remain behind the plate, with above-average arm strength and good agility.”

Reached by phone at his home in Escondido, CA. Jackson was predictably thrilled.

“It’s one of those feelings that’s hard to explain in words,” Jackson said. “It’s an honor to be able to be considered with the other top players that have been chosen.” Seattle general manager Jack Zduriencik and his team of scouts discussed Jackson’s potential at all three and believe that outfield is the best spot for him to begin.

Besides catching, he also has played third, but his pro future is in the outfield.

“If you wanted him to catch, he could do that,” GM Jack Zduriencik said. “But with a young catcher (Mike Zunino) in the big leagues with us now, with this kid’s bat potential, the fact that he throws so well — he’s got a terrific arm — let the bat do the talking for him.

“We think that the bat’s going to play quicker.”

Jackson comes from an elite high school program that has produced major-league players such as Philadelphia Phillies pitcher Cole Hamels and former Texas Rangers hitter Hank Blalock, among others.

“We look at him as an advanced high school player because of the program he’s been at,” said McNamara.

Zduriencik and McNamara believe he will move up quickly. But first, the team has to sign him by July 18. Jackson committed last year to play baseball at Oregon.

Zduriencik was confident the team would get a deal done.

“I do think his desire is to play pro ball,” said Zduriencik. “We’re excited to watch him.”

With the 74th and final pick of the draft’s first day, the Mariners took Canada’s top high schooler, Gareth Morgan, whom scouts say has the size and tools to profile as a prototypical right fielder.

“He has outstanding tools,” MLB.com uoted one scouting director as saying. “He’s a little more raw, and as a Canadian kid, that’s understandable. He has the kind of tools you’re looking for. His raw power is outstanding. It’s well, well above average.”

Morgan is committed to North Carolina State. Here’s a feature on Morgan from the Toronto Sun.