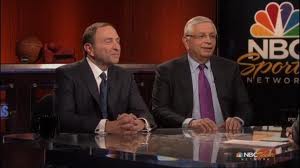 Overshadowed this week by the starts of the Stanley Cup and NBA Finals, a horse with a real shot at the Triple Crown and the Mariners causing MLB to swoon at their June — not to mention the cramps of LeBron James, which has been to Twitter what milk is to kittens — NHL Commissioner Gary Bettman appeared Wednesday to have slipped in a stiletto into Seattle’s hopes for an expansion franchise.

Bettman, speaking to reporters before Game 1 of the Finals, said:

“Seattle, which seems to have the most number of people interested . . . the fact is, there’s no building that’s on the horizon. The person who controls the rights to build a building in Seattle is intent upon having an NBA team before he builds a building.”

Bettman, who apparently has a connection to the Internet, was aware that Steve Ballmer, once Chris Hansen’s partner in the SoDo arena project, dumped Hansen for gratification more instant, buying the Los Angeles Clippers for $2 billion. Along with many others, Bettman seems to have concluded that the arena deal is dormant, if not dead.

“Based on what’s happened to date,” Bettman said, “and the fact that his partner has now bought a different franchise, I don’t know that there’s any prospect of a building in Seattle. It’s nice that there’s interest, but there’s really not a whole lot for us to do with it.”

That sounds definitive. But if you were to have joined me at the foot of the master of passive-aggressive manipulation, David Stern, over these many years, you might recognize that his remarks were less of a rebuke and more of a prod.

Bettman, named sports executive of the year last month by Sports Business Journal for creating the NHL’s best business profile in its history, worked his way up in Stern’s NBA junta to No. 3 before becoming NHL commissioner in 1993. He expanded the league from 24 to 30 teams, but none since 2000.

He was criticized, justifiably at the time, for overreaching into the American south, where hockey has no tradition. And trouble remains in markets for the Coyotes in Phoenix and the Panthers in Florida.

Nevertheless . . . the worlds of sports, media and technology have changed dramatically in the last 15 years.  So much so, that all sports find themselves in the fortuitous position of being the last and only regularly scheduled subject matter on television, broadcast or cable, that is appointment TV. Everything else, including news, is easily obtainable by increasing numbers of consumers on mobile devices and via subscription services.

The rapidly expanding TV-rights fees for all sports reflects the fact that games are the only programming that can guarantee millions of eyeballs at an appointed time to see commercial advertising. Bettman knows his sport is growing sufficiently that expansion is reasonable, particularly when there is an opening in the 13th-largest U.S. market that is a three-hour drive from an NHL hotbed in Vancouver.

He saw the Seahawks parade, as well as 12th Man flags across British Columbia. And he knows that, for civic extortion purposes, the Seattle market temporarily is more valuable to the NBA vacant than occupied.

Otherwise, he wouldn’t have bothered to fly to Seattle May 6 to meet Mayor Ed Murray and King County Executive Dow Constantine. Since Bettman didn’t hear what he wanted regarding the city’s immediate willingness to accept a rewritten memorandum of understanding with Hansen to put hockey first in the proposed building, he did what he could do this week.

Carefully avoiding use of anyone’s name, a classic Stern tactic, he indirectly kicked the butts of Hansen, the city and county, and potential team owners to get busy. This is how the CEOs of monopoly operations use their bully pulpits.

To cite a locally painful precedent, during Hansen’s attempt to purchase and relocate the Kings from Sacramento, Stern in February 2013 publicly warned Sactown mayor Kevin Johnson that his early efforts at assembling investors to match Hansen’s offer were inadequate. A little later, he trumpeted the glories of the Seattle group.

“There’s a great and strong application from a terrific city to bring in a third and possibly a fourth team in a brand-new building, well-financed ownership group, without the ability yet to build, because there are several things that have to be overcome,” Stern said. “But that’s really good. So if you’re a commissioner, you like that.”

Commissioners like pitting cities against each other. But Stern’s flattery of the Seattle bid was pure BS. He had no intention of allowing the Kings to move. He deliberately manipulated events to get his desired outcome.

Now Bettman is attempting the same to induce his desired outcome in Seattle, although his chances are not as good because the NHL has no residency here and can’t threaten the loss of something the city never had.

Bettman knows that Hansen, along with potential NHL team owners and the city’s political leadership, have to generate a belief in a good opportunity. Hansen said in interviews earlier this week that he is willing to take on hockey partners as long as they get some skin in the arena game, as well as put up guarantees protecting the city’s investment, which would be about $120 million for a single team.

The arena plan, as Bettman pointed out, must come first. Presuming that a final environmental impact statement is released in September, the SoDo site will come under more intense criticism and very likely litigation. Until that is resolved, the NHL will hold off considering expansion, which means the city council will not be compelled to take a vote on whether to re-do the MOU for hockey.

All of that makes the arena project sound like a long shot, which it us. Unless, of course, the prospective NHL owners, with Hansen, see their way clear to finance privately the arena construction, which removes all politics from the equation.

While that may seem unlikely from Hansen’s perspective, given what he believed was already a screamin’ deal he presented the city, much has changed since he drew up that financing plan in 2011 that counted on the city’s ability to borrow construction money more cheaply than could a private developer.

TV rights continue to soar, Seattle’s economy continues to grow, sports success has come to the region, technology continues to find ways to extract more revenue from sports consumers, the Golden State Warriors have proposed an all-private arena for San Francisco — and a middling NBA franchise is worth $2 billion.

Beyond sports, there is a larger utility for an arena. For all its continuing influence in tech and world health, Seattle still lacks a building big enough to host a top-end, indoor convention/sport/event. Every mover and shaker in this town knows it.

Next time you’re at a high point that overlooks downtown, count the construction cranes. Most are astride private projects. The money to create these projects comes from all over the world, and is plentiful. Something must be happening in Seattle to draw this amount and diversity of private investment.