Marshawn Lynch figures to be good to go for 2014, although physical proof is scarce lately. But that means more time for mysterious Christine Michael to test out his beast modes. 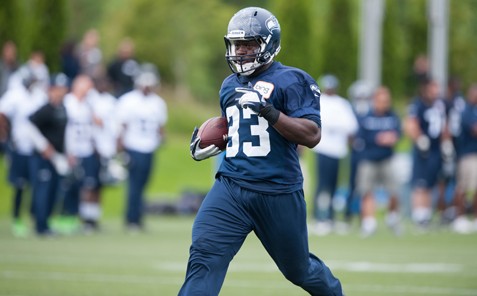 Christine Michael is the guy everyone wants to see./ Seahawks.com

Position battles are relatively few for the Seahawks, having all coaches and many players returning from the gruesome quartering of the Denver Broncos in the Super Bowl. There is, however, one guy many want to see in serious action this fall: RB Christine Michael, national man of mystery.

One in a brigade of players who more or less red-shirted in last year’s run, Michael played in four games and carried the ball 18 times, which, for a second-round draft pick, was the equivalent of a cloak of invisibility.

Marshawn Lynch was the Beast who must be fed at the position. But he is not attending the Seahawks’ organized team activities these couple of weeks, which are optional. When it comes to practices, Lynch is the most optional Seahawks player, much in the Seattle practice tradition of Gary Payton and Ken Griffey Jr., who, if memory serves, were all ’bout that action too, boss.

So eyes are turning to Michael. Mine landed on him Monday afternoon when he was waiting his turn on the sidelines during drills, and saw a most curious thing.

When the offensive unit on field completed a big pass play, the unit on sidelines erupted, then moved out to the field.

Instead of walking or running, Michael did a bizarre, frog-like ambulation in which he squatted so deeply that he knees skimmed along the ground as he propelled himself forward with feet bowed in so that he appear to be running in his ankles.

Besides Ichiro, no human above the age of seven should be that flexible. At 5-10 and 221 pounds, Michael seems to hug the ground, yet fly over it, in ways that seem species-defiant. He always has been a physical freak.

In the scouting combine prior to the 2013 draft among the running backs, the former Texas A&M star had the highest vertical leap (43 inches) and cone (6.69 seconds) and shuttle (4.02 seconds) drills. He was second in the broad jump (10 feet, 5 inches) and third in the bench press (27 reps with 225 pounds). His time of 4.43 seconds in the 40-yard dash ranked ninth, but only one of the eight faster backs weighed more than 210 pounds.

But he dwelled in shadows in 2013. Besides having Lynch dug in ahead of him and second-year RB Robert Turbin well-established, Michael didn’t have his head on straight.

“It’s hard for guys that have been star players to come in and have to fit into a backup position and understand how you’ve got to focus and study,” coach Pete Carroll said Monday. “Just regular rookie stuff is really what he had to get through.”

“I think attention to detail and becoming a professional football player, taking it like it’s his job,” Bevell said, when asked what Michael had to improve upon. “I think there were some distractions going on for him a little bit, and he just really needed to focus in on the details of things – footwork, reads, assignments and all those kind of things that he’s really doing right now. He’s really turned the page on last year and we like what we’re seeing.”

Said Carroll of the competition for Michael with Lynch and Turbin: “He’s really closed in on them.”

That could be Carroll’s way of gigging Lynch and Turbin. Then again, Bevell already did that last week when, during a Seahawks Town Hall meeting with season ticket holders, he told the audience that the Seahawks were planning on “running backs by committee.”

Given Lynch’s eminence, eyebrows were raised. He did, after all, finish sixth in the NFL in rushing with 1,257 yards on the second-most carries, 301.

Bevell was quick to tell his questioners Monday that he was talking about OTAs, not the regular-season plan. But that sounded hollow since the biggest part of the “committee” wasn’t participating in OTAs.

Even casual football fans are aware these days that the expiration dates on NFL careers for running backs come up faster than quarterly tax reports. Lynch is only 28, but no one puts on miles harder, so the curiosity grows as to when the Skittles might wear off.

Without Lynch to attest for himself, the young guys have a chance to try on their beast modes.

“This has been great for them,” Carroll said. “Christine has made the most progress. He’s had the farthest to come. Turbo continues to work really well. Turbo got his knee cleaned up (apparently an arthroscopic procedure), which has really helped him.

“Those guys are right on it. Really doing well on pass protection and pass assignments. In the passing game both guys have shown that they can help us.”