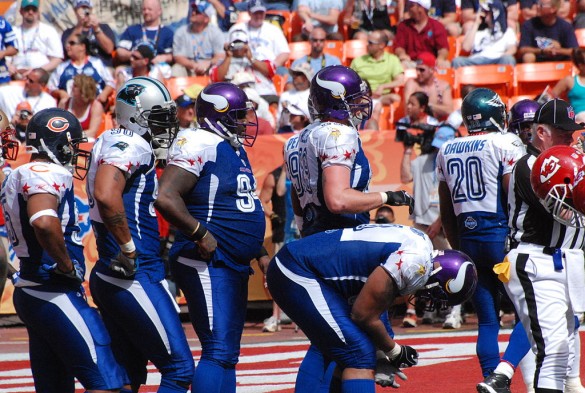 Kevin Williams (94) and Vikings teammates Pat Williams and Jared Allen during the 2008 Pro Bowl.  The Vikings led the NFL in rushing defense from 2006-08. / Wiki Commons

Kevin Williams, a five-time All-Pro defensive tackle during his 11 seasons with Minnesota, was signed by the Seahawks Thursday afternoon, adding experienced depth to a defensive front that took some hits in free agency.

Williams, a 6-foot-5, 311-pounder who will be 34 in August, started 15 games last season in Minnesota. He had 3.5 sacks, an interception and five passes defensed along with 17 tackles.

He played about half the snaps (394), which is likely to be the case in Seattle, where coach Pete Carroll had big success rotating nine linemen depending on down and distance. Starting tackles Tony McDaniel and Brandon Mebane return.

@Seahawks FA signing…wanted to be the first to welcome DT/DE Kevin Williams to the team! #GoHawks

ESPN reported the deal is for one year at a little more than $2 million. Williams visited with the Seahawks and several other teams in April, and contemplated retirement.

“My main criteria has really been having a chance to win and playing with a proven quarterback,” Williams told SiriusXM radio recently. “Those things are huge when you get older. You want to have that chance to get in the dance and just be there to have a chance at the end of the season.

“I think I still have some juice in the tank and to be in a nice rotation, it would maximize both for me and whatever team I’m with to both get the best from it.”

The Seahawks let go DLs Red Bryant and Chris Clemons in free agency to save money against the salary cap.

Seahawks owner Paul Allen was the first to break the news via Twitter, a tweet that was then deleted.