Vernon Davis, 49ers’ premier tight end, writes in MMQB why he plans to hold out, why NFC Championship game was best ever, and why Russell Wilson is best QB. 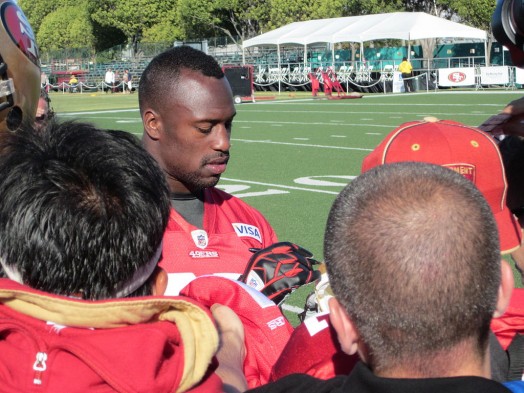 Making headlines for a potential holdout this week, 49ers TE Vernon Davis also shared his thoughts about two Seahawks-related topics. The drama-pickled NFC Championship, even though the Niners lost, was the best game he’s played in, and his No. 1 opponent quarterback is Seattle’s Russell Wilson.

Writing in MMQB.com for vacationing Sports Illustrated writer Peter King, Davis, a two-time Pro Bowler who had a career-high 16.3 yards per catch last season, said of his impending holdout — as with Seahawks RB Marshawn Lynch, Davis has a valid, once-premier contract that now seems ordinary relative to the market — that he wants and deserves more money.

“It’s all about getting paid what you deserve,” he wrote. “It’s not that complicated. I want the 49ers to win the Super Bowl, and I want to be on the field this summer working toward that goal, but I have to worry about my future first.

“Most of my teammates and many players in the NFL understand that. A few don’t. Behind closed doors, they’ll say they’re all about the team and would run through a brick wall for the organization. But when you look closer, they’re doing things to contradict themselves.”

Those comments also contradict what Davis told other media sources, in which he claimed he would show up Tuesday the the start of the Niners’ three-day mini-camp. We’ll find out shortly how accurate a writer he is.

Meanwhile, under the headline, “Best Game I Ever Played In” Davis, at 30 an eight year vet, concurred with many in Seattle who thought the Jan. 19 epic at the Clink, won by Seattle 23-17, was a cut above the best football:

As athletes, we like to say we’ve moved on entirely from losses, pouring focus into next season. Often, that’s not true. Every once in a while, while I’ve been traveling this summer or working out or spending time with my family, I think about that NFC Championship Game against Seattle—the one Richard Sherman correctly described as the real Super Bowl.

A few things I remember:

You know what happened, of course; Sherman tipped Colin Kaepernick’s end zone attempt to Michael Crabtree, turning it into a game-winning interception. Kudos to the Seahawks, who won a Super Bowl with a defense that isn’t as simple as the players like to boast. I don’t know how they went about trying to stop the rest of their opponents, but they spent a lot of effort mixing up coverages against us.

But that’s not what stands out to me about that game. I think about the final play, and all the talk that followed it. Did Kaepernick make a bad throw, or a bad decision? Is Sherman lucky or good? My answers: Sherman is good. And Kaepernick made the right call, no matter the outcome. He took a shot. He put his trust in his No. 1 receiver. Sometimes they make the plays, sometimes they don’t. But in those moments you have to have faith that your guy is going to pull it down.

It was, and remains, a devastating finish. But I think it made Crabtree and Kaepernick stronger. Anytime you fall into a situation where stuff doesn’t go the way you expected, where you know you should’ve made a play but you didn’t, it makes you go correct it. With experience comes growth.

It’s exhausting to make it two years in a row and not finish. I hope my younger teammates realize that you can’t take the opportunity for granted. Whenever you get to play in a Super Bowl or a championship game, you have to win because you might not ever get it again. The window of opportunity is as small as a pea. Teams start to break up, players get old. You just have to seize the moment.

Davis also said Wilson vaults ahead of more experienced and heralded quarterbacks as the best QB in the NFL right now — other than his guy, Colin Kaepernick. The high praise from a foe:

I think among the 31 NFL quarterbacks who don’t throw me passes, Russell Wilson is the best. He’s got all the tools; he has the ability to keep the play alive, and he’s very accurate with a strong arm. He exemplifies what it takes to be a winning QB in the NFL. If you asked me to choose based on record and experience, I’d take Tom Brady or Peyton Manning—but in terms of right now, my pick is Wilson.