Mariners prevail on a sad day for visiting Padres 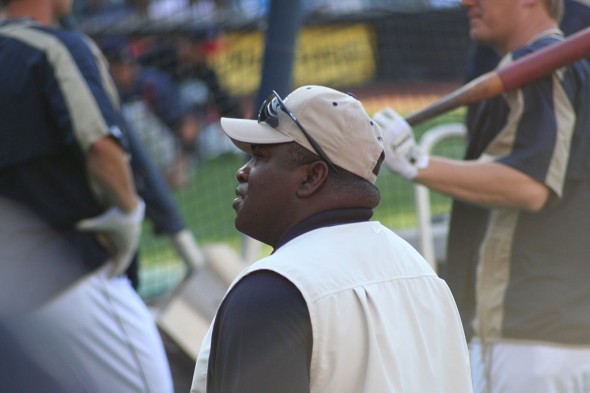 Tony Gwynn was saluted by the Mariners and his only MLB club, the San Diego Padres, Monday night. / Wiki Commons

Kyle Seager and Chris Young combined to guide the Mariners to a 5-1 win over the Padres on a Monday night at Safeco in which both teams mourned the death of Padres’ Hall of Famer Tony Gwynn.

While San Diego lost its biggest baseball icon, one member of the Mariners’ family lost a brother. Chris Gwynn has been Seattle’s director of player development since 2011. After a video tribute and a moment of silence, the squads played the first of a four-game series split between the cities.

The Mariners took advantage of the early wildness Padres’ starter Tyson Ross, scoring three runs in the first inning courtesy of a homer off the bat of Kyle Seager. With James Jones on third and Robinson Cano on first after a walk, Seager drove a 3-0 fastball into the seats in right field for his 10th home run.

Seeing a green light from his manager in the 3-0 count delighted Seager.

“I was just looking fastball down the middle, a pitch that I could drive,” said Seager. “In that situation, I had already seen a couple pitches. You know he’s got the big sinker ball . . . That’s a ground ball waiting to happen there. When you get the opportunity, you got to make sure you capitalize and get a ball in the air.”

In the second inning, Seattle (36-34) tacked on two more runs to give its starter Chris Young a 5-0 cushion. Brad Miller hit a solo home run down the right-field line with one out and Cano hit a two-out RBI double, scoring Jones.

Ross came in tied with National League aces Adam Wainwright and Johnny Cueto with eight starts of six or more innings while allowing one run or fewer, best in baseball. His command Monday was nowhere reminiscent of those numbers. He completed 5.2 innings and surrendered five runs on seven hits, seven walks and one hit batter while striking out six.

“The numbers say that Ross is pretty tough on lefties and I was really concerned about that tonight,” McClendon said. “Particularly with that wipe-out slider that he has. It seemed like he settled down later in the game . . . was able to get the slider down and in.

“We were just able to take advantage early, capitalize on some things and it worked out for us tonight.”

Young (6-4) had a much cleaner outing. After suffering his first loss at Safeco Field as a Mariner Wednesday, Young responded with six shutout innings on four hits and no walks. He also struck out six and lowered his ERA to 3.40.

“It was nice to get a lead for (Young),” McClendon said. “He made some nice pitches early on. It was never really stressful until maybe the sixth inning. He did a nice job for us.”

Jones had three stolen bases and scored two runs. In his first two plate appearances, Jones reached on a fielder’s choice as the Padres elected to retire Endy Chavez. Jones, a little disappointed for a failed sacrifice attempt, took it upon himself to get into scoring position. He stole third off Ross and catcher Yasmani Grandal before scoring on Seager’s homer.

“Definitely not the plan right there,” Jones said. “I was trying to move (Chavez) over, but I’m happy it went well.”

His manager likes what he’s seen from Jones on the base paths to trust his instincts.

“He’s made nice decisions. I like his reads,” McClendon said. “I think he’s a very intelligent player on the base paths and he’s done a nice job to this point.”

Young improved to 4-1 with a 2.23 ERA in seven starts in his home park. It was a bittersweet day for the former Padre as any joy in facing an organization with so many familiar faces was lost, given the somber news earlier in the day.

“He meant a lot to everyone (in San Diego) and I’m grateful that I had the opportunity to work with him and get to know him,” said Young. “Obviously you could talk all day about hitting with him, but he would give you tips as a pitcher and just be there to cheer you up, too.

“I’m just really sad for the Gwynn family, but thankful for the influence that Tony had on me.”

McClendon said 1B Justin Smoak (quad strain) will likely begin a rehab assignment with Triple-A Tacoma Wednesday. Smoak was placed on the 15-day disabled list on June 11 (retroactive to June 10). He will be eligible to return to the M’s on June 25 . . . Meanwhile OF Michael Saunders (right AC joint inflammation) and 1B/DH Corey Hart (hamstring) will begin rehab assignments in Tacoma by the end of the week . . . The three steals for Jones gave him 10 and was the first time a Mariner recorded three steals in a game since Ichiro Suzuki Aug. 4, 2010.