Despite rumors to the contrary, Marshawn Lynch showed up on schedule Tuesday for Seahawks practice. Kinda took all of the drama out of the off-season. 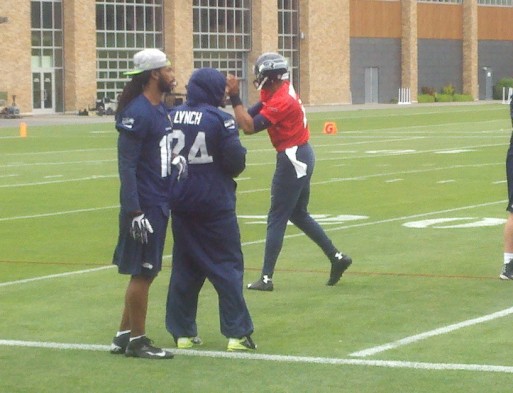 Marshawn Lynch is no fun at all. It would be much more entertaining to speculate on his absence rather than report that he was at practice.  But there he was Tuesday afternoon, standing there. Not practicing, but standing. Indications of the Seahawks star running back’s financial dismay were not apparent.

“We’re just taking care of it, making sure it’s OK,” Carroll said said of the previously undisclosed injury. “There’s enough there that we don’t want to mess with it.”

Whether the ankle was a cover story is unknown, just as were the claims Lynch told people he wants to rework the final two years of his contract. But the fact was he showed up, meeting his contractual obligation that averted a fine of up to $70,000 if he skipped out on all three days of this week’s mini-camp.

Since he already missed the team’s optional 10 organized team activities, it might have helped if he were to join in on the week’s rehearsals. But that’s not how he rolls. The Seahawks are fine with it.

Since Lynch, as per custom, was unavailable to media, we’ll have to let stand Carroll’s definition of the situation, also because Carroll has never discussed contract issues.

He said he has talked regularly with Lynch, and nothing has come up about money.

“I’ve talked to him a number of times,” Carroll said. “Everybody (among Seahawks personnel) at one time or another has been in contact with him. He’s made it very easy on us to do that. He’s got a great relationship with our club and our teammates and the coaches.

“We have rested him a lot in the off-season. He takes a big pounding during the year. It takes him a long time to get his body back to where he doesn’t feel the rigors of the season. You won’t see him get the ball a lot in the preseason. We will work all the way to the opening day and see if we can him right right there.”

Because Lynch avoids interviews as if they were tornadoes, we’re unlikely to find out whether he’s going to try to leverage more money. He’s got a legitimate concern that the Seahawks, who have him for two more years, might decline the last one since it will cost the club $9 million against the salary cap.

But Lynch also has a legitimate contract that the Seahawks are reluctant to re-do because of precedent.

The Seahawks ratcheted up the speculation themselves when offensive coordinator Darrell Bevell said recently the running back spot would be done by committee, a statement from which he later backed away. While Carroll acknowledged that backups Robert Turbin and Christine Michael were have good offseasons, there was nothing said Tuesday that indicated anything was changing regarding Lynch.

“Marshawn has really been the guy for us,” Carroll said. “We love everything about the way he plays and what he brings to this team. He has never taken a step backwards at any time for us in all the time that we’ve been here.”

The fact is that the Seahawks have nearly all the leverage on their side, and Lynch and his agent know it. It’s possible the Seahawks might fight some wiggle room under the cap to advance some money owed to him in 2015 into 2014, as they did with DE Chris Clemons in 2012. But the collective bargaining agreement in the NFL is much more player-unfriendly than in any other sport.

If a small sweetener makes for some kind of precedent, the Seahawks will live with it, as will the rest of players. As was mentioned here before, unique players in all sports, such as the Sonics’ Gary Payton and the Mariners’ Ken Griffey Jr., end up getting unique treatment.

As Carroll said, Lynch qualifies as unique. Unlike 90 percent of his teammates, he’s a difference-maker. He rates different treatment.

As Lynch often recommends in his business dealings: Stop freakin’.