Fresh out of enthusiasm for the Vikings’ QB carousel, DT Kevin Williams put a premium on Russell Wilson as a reason for signing with the Seahawks in free agency. 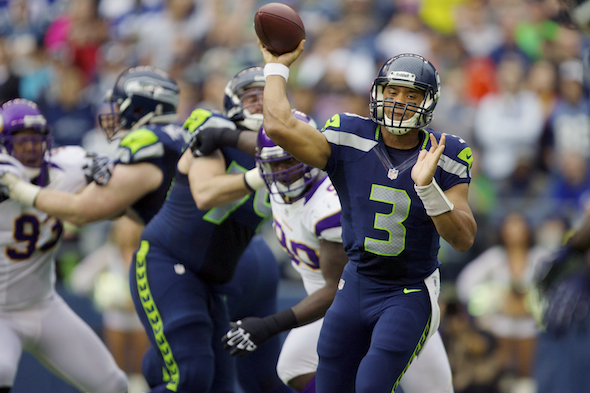 The value of a quality quarterback — the most important position in all of team sports — has long been understood. But a fuller appreciation of the virtue that was delivered by Seahawks newcomer Kevin Williams Tuesday underscored Russell Wilson’s eminence — a premier defensive tackle left money on the table to play on his side.

For 11 years and five All-Pro recognitions, Williams was a defensive stalwart with the Vikings — a sort of Cortez Kennedy of the Twin Cities. But as a free agent, Williams turned down more money from the Vikings as well as the New England Patriots — long the NFL’s success magnet — to come here.

“It was there,” Williams said of the Vikings offer. “But, at the end of the day you don’t know what exactly they’re going to do. We’ve been up and down so many years lately, there is no certainty.

“I think (the Seahawks are) a great young group of guys that’s doing stuff right out here in Seattle and winning right now.”

Instability at quarterback in Minnesota is similar to more than 20 NFL teams, and is the single biggest impediment to success. Coach Mike Zimmer said Tuesday at the Vikings mini-camp that there would be an open competition among veterans Matt Cassel and Christian Ponder and rookie first-round draft pick Teddy Bridgewater.

Exactly what Williams, 33, did not want to hear.

Sounds like three years ago in Seattle, when Wilson and veterans Matt Flynn and Tarvaris Jackson were in open competition, providing sports media’s favorite chew toy — the quarterback controversy.

In defending his decision, Zimmer sounded almost exactly as Seahawks coach Pete Carroll did at the same crossroads, having invested in March a multi-year extension for Cassel, a 10-year veteran free agent whom most Vikings watchers saw as the presumptive starter.

“I’ve never said that,” Zimmer told reporters. “I know I’ve heard other people say it, but I’ve never said it. From the day I walked in here, I said I want tough, intelligent, smart football players and I want competition at every position. To me, we’re still competing; everybody’s still competing for jobs. I’m competing to be a good head coach; assistants are competing to be good assistant head coaches. Again, I don’t want to rush into anything.”

Straight from 1 Carrollians 1:1, in the unabridged version of the St. Pete football bible.

The principle remains sound; whether the Vikings succeed as well remains to be seen. Clearly Williams, nearing the end of his career but still valuable, didn’t want to wait to find out.

It also helped that the Seahawks’ atmosphere is more like Brazil during Carnevale (minus the soccer).

“You know coach Carroll, he’s an exciting guy all of the time,” Williams said. “You just want to be around it. These guys seem like they’re having so much fun here. I told (DT Brandon Mebane) earlier that it’s just exciting to be around football and see guys having fun.”

Getting back to Williams’ QB experience in Minnesota: Since Daunte Culpepper’s mostly laudable five-year run as Vikings starter ended in 2004, Williams’ second year, the Vikings have had as principal QB starters Brad Johnson, Tarvaris Jackson, Gus Frerotte, Brett Favre and for most of the last three seasons, Ponder, who was usurped by Cassel in the 10th game last fall.

By no small coincidence in that time, the Vikings have played in four postseason contests, winning once in 2009 behind Favre. Obviously many factors contributed to the Vikings’ malaise. But it certainly wasn’t the rush defense. Williams was a big part of a crew that led the NFL in rushing defense from 2006 to 2008.

That will be a big part of the Seattle plans for Williams, who fills a void the wasn’t addressed fully in the draft or previous free agency.

At 311 pounds, he’s a few biscuits lighter than Red Bryant, the chief run stopper last season who moved in free agency to Jacksonville. But Williams thinks he’s a little more versatile. He had 3.5 sacks last season in Minnesota, where Pro Football Focus rated him as the Vikings’ best defensive tackle.

“I like to not put myself in one category,” he said. “I try to do it all pretty good. If it’s rush the passer, stopping the run, or whatever the case, I think I can help out in each way.”

In Seattle, where no defensive lineman played 600 snaps, compared to the 708 Williams logged last season, he’ll be in a rotation that was a big part of the success at maintaining game-long pressure.

“I think if I’m playing 500 plays versus 700 plays at this age,” he said, “I can definitely still get after the quarterback. Excited to get going and we’ll see. Hopefully I can earn some of those reps.”

The other virtue of Williams’ arrival is that, except for practice, he no longer has to look foolish running after Wilson.

“That little step back or wiggle – whatever he’s doing – it was always tough to get him.”

Call it part of the recruiting pitch.